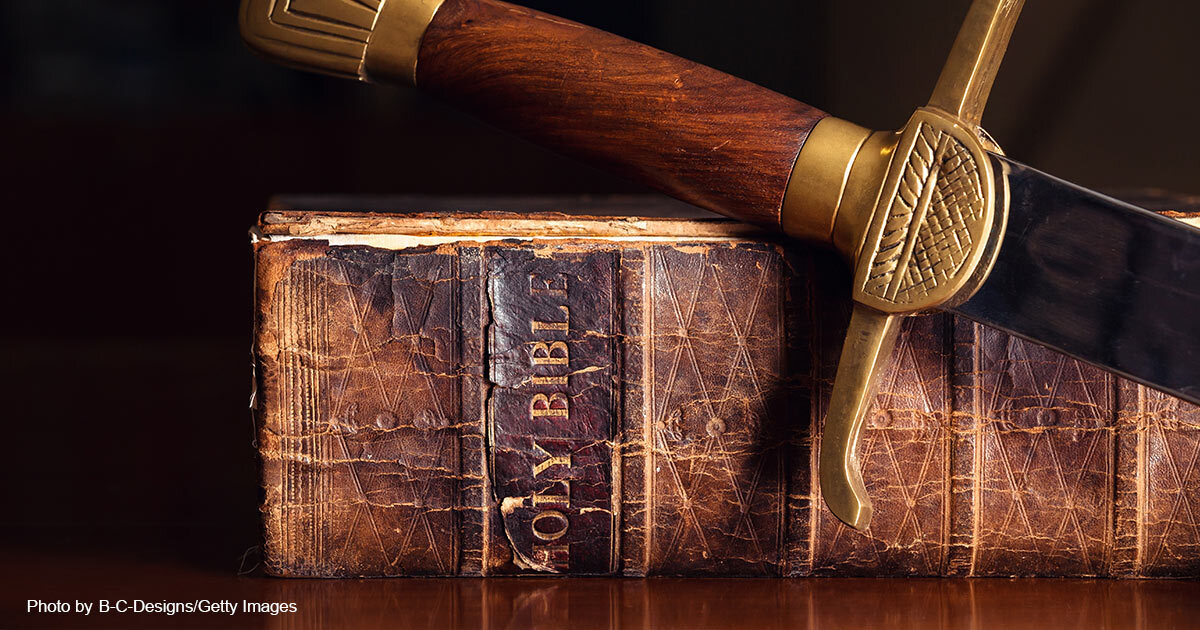 A Sword of Peace

Politics is inherently oppositional. To take a stance on an issue about which people have strong and diverse views is to invite conflict.

This is a hard saying. Christians are called to be reconcilers, to be filled with grace and charity. We represent a Prince Whose eternal reign is one of peace.

Yet we also represent a Savior Who said, “Do not think that I have come to bring peace on earth; I have not come to bring peace, but a sword” (Matthew 10:34). He was referring not to a literal sword but rather the division that would be caused by the stand He calls us to take for and about Him. Jesus said, “I am the Way, the Truth, and the Life. No one comes to the Father except through Me” (John 14:6) and, “If anyone would be My disciple, let him deny Himself, take up his cross, and follow Me” (Luke 9:23). The claim of exclusivity and the demand of costly discipleship do not go down well in a fallen world or post-Christian culture.

This does not give Christ’s followers license to be obnoxious in the name of truth, any more than His command that we demonstrate compassion and understanding means we must never give offense. We are to be like Jesus, Who was full of both grace and truth (John 1:14, 17). This is one of the paradoxes of God’s kingdom: To bring peace, we must propose truths that often cut deeply into calloused flesh.

There are many issues about which Christians cannot speak with an authoritative, “thus saith the Lord” stance. For example, there is no biblical position on the Keystone Pipeline, public housing reform, or how to repair urban water systems. How much should the U.S. spend on a given weapons system? What kinds of crops should the government subsidize, if any?

These and many other things are issues of prudence, factual information, constitutional application and, for Christians, consideration of how biblical principles should be integrated with policy decisions. It is essential that believers understand that honorable people can disagree about them without compromising their moral integrity. Followers of Jesus need to remember this.

Understanding how best to apply biblical principles depends on having a good grip on what those principles are. Throughout the Bible, God’s people are called to be champions of justice, defenders of the weak, generous in giving, and truthful in all things.

It is at this point that Jesus’ disciples need to remember that the New Testament makes clear that God reserves certain roles to government (“bearing the sword” to prevent and punish evil, per Romans 13:4) and others to the church (evangelism and disciple making, per Matthew 28:18-20). Whenever I hear a politician of either party cite the Lord’s statement, “Inasmuch as you have (shown mercy) to the least of these, you have done it to Me” (Matthew 25:20) as a pretext for some federal program, I cringe. Jesus made this statement in the context of reward and punishment for the way people treat His followers, not as a pretext for government to spend great wads of money on an ostensibly compassionate program.

As to specific issues, there are a few things about which Scripture allows no “wiggle room” for faithful believers. It is impossible to study Scripture and not understand the personhood begins at conception. Since every person is made in God’s image and likeness, this means protecting life in the womb and upholding its dignity throughout its natural life.

This also means, then, that when legal sanction is given to the destruction of unborn life or to the euthanized death of someone at a later stage of it, Christians must use the tools they possess to oppose it. As American citizens, one of those tools is political — the ballot box, elective or appointive office, campaigns of public education and persuasion, and so forth. Other tools are individual and corporate acts of mercy, through such things as adoption, pregnancy care centers for women and their unborn little ones, taking women in crisis into our homes, and so forth.

Similarly, when young men who claim a feminine identity are allowed to use girls’ locker rooms, when someone is denied a job because of her skin color, or when a baker is called a hateful bigot for refusing to use her talents to decorate a cake for a wedding whose performance violates her faith, to passively accept these things when legal and political recourses exist would be to consign faithful believers and good citizens to an oppression they should not have to endure.

“Seek the welfare of the city where I have sent you into exile,” said God through the prophet Jeremiah, “and pray to the Lord on its behalf, for in its welfare you will find your welfare” (Jeremiah 29:7). This is an intrinsic part of our calling as exiles living in the kingdom of man. In 2023, we need to keep fulfilling it.