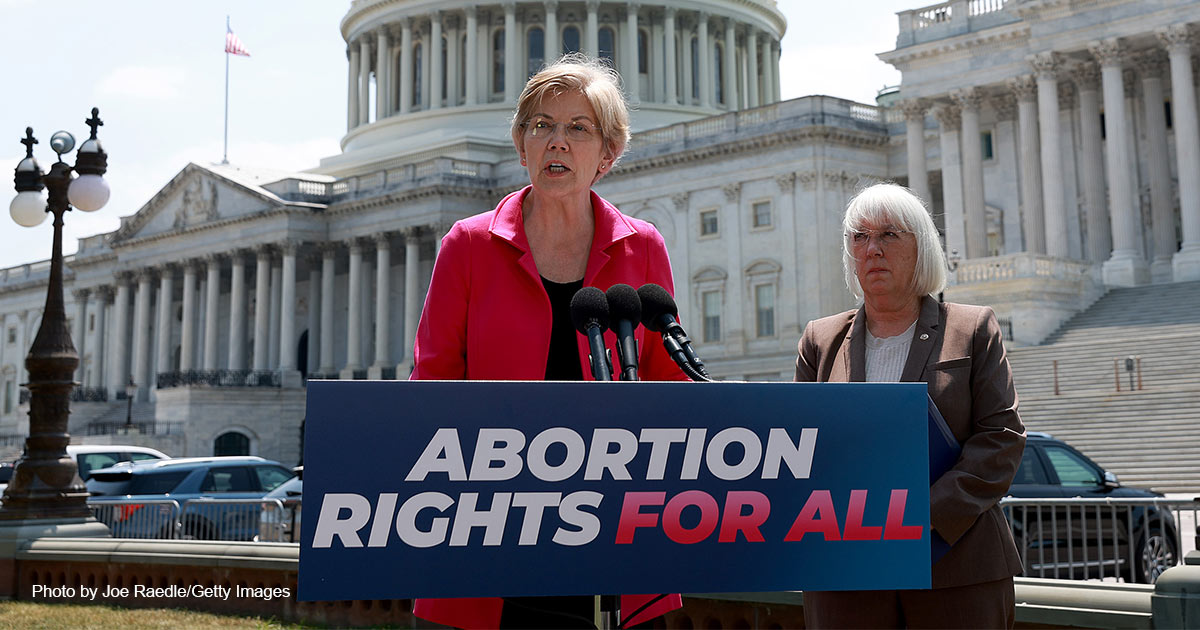 Dems Declare War on PRCs for Offering Women What They Won’t: A Choice

As far as campaign slogans go, “We Hate Babies” isn’t a particularly good one. And yet, with each passing day, that seems to be the message the Democratic Party is desperate to convey. Like Barack Obama, who insisted he didn’t want his daughters “punished with a baby,” the Left’s post-Dobbs strategy seems to be painting motherhood as the worst form of oppression and pregnancy as a torture encouraged only by pro-life zealots. It’s a far cry from society’s mainstream, but then, what about the president’s party isn’t?

For Senator Elizabeth Warren (D-Mass.), the end of Roe triggered a surprisingly visceral reaction. More than almost any other elected leader, Warren has become publicly hysterical at the thought that women might actually consider carrying their children to term. As a mother of two, her frantic desire for other women to choose abortion has gone from embarrassing to downright disturbing.

Most recently, Warren’s emphasis has been shutting down pregnancy resource centers (PRCs), which continue to commit the cardinal sin of the Democratic Party: offering pregnant woman an alternative other than abortion. “[I]t’s more important than ever to crack down on so-called ‘crisis pregnancy centers’ that mislead women about reproductive health care,” she ranted. “I’m working in the Senate to stop these deceptive practices and ensure every American can access the abortion care they need.”

She accuses these centers of “fool[ing] people who are looking for pregnancy termination.” “We need to shut them down here in Massachusetts,” Warren said in July, “and we need to shut them down all around the country. You should not be able to torture a pregnant person like that.” To put an end to the “torture” of free diapers, counseling, ultrasounds, adoption help, financial support, parenting classes, and material care, Warren and company have introduced a clever little bill aimed at bankrupting their pro-life competition, called the Stop Anti-Abortion Disinformation Act.

Under it, PRCs and other charities would be fined $100,000 or “50% of the revenues earned by the ultimate parent entity” for spreading “disinformation” related to abortion (which, conveniently, is not defined anywhere in the legislation). As the editors of National Review explain, the Federal Trade Commission would be the ultimate arbiter of what these misleading statements are.

If the strategy sounds familiar, it should. Democrats from California to New Hampshire have tried to put the squeeze on pregnancy resource centers by dictating what they can and can’t say to women. Kamala Harris and Xavier Becerra both used their position as California state attorneys general to try to force pro-life clinics to advertise for abortion or fork over thousands of dollars a day in fines. That Reproductive FACT Act, as they called it, was ultimately struck down by the Supreme Court — but its legacy lives on in the censorship Warren is demanding today.

Their gameplan is the same today: bleeding pro-lifers dry and discrediting them in the process. Right now, Democrats are on defense, fighting a movement with judicial momentum that outnumbers them in clinics three-to-one. There’s a very real fear among the Left that women might embrace other ways of coping with unexpected pregnancies than terminating them.  And if you’re wondering why radicals like Warren take that decision so personally, the answer is simple — money. The Left’s golden calf also happens to be its cash cow. “I’ve always thought, if you want to find out what’s going on with the abortion movement,” Family Research Council President Tony Perkins said, “follow the money. … They are making money every time a woman crosses through the doors…”

The 3,000 PRCs of America, on the other hand, aren’t riding the abortion industry’s taxpayer-funded gravy train. They aren’t raking in government dollars only to turn around and send a healthy deposit to politicians who keep the money flowing. Every cent they raise goes directly to helping women — not reelecting Democrats. And, deep down, that’s what Warren objects to. Like everyone else on the Left, she only supports a woman’s choice if she stands to profit from it.

Meanwhile, if Democrats are so concerned about “disinformation,” then how about coming clean about the horrors of abortion? If it’s deception Warren is worried about, maybe she should start policing Planned Parenthood. After all, they’re the ones who pride themselves on hiding the truth about unborn children, abortion, and its lifelong effects. And that’s the irony of this whole debate. If anyone’s in favor of full disclosure, it’s the pro-life movement. Unlike the Left, they want moms to know the scientific facts about their babies. And unlike the competition, they don’t have a financial stake in the outcome.

Dr. Donna Harrison, the CEO of the American Association of Pro-Life Obstetricians and Gynecologists, is sick of the Left’s lies that PRCs are “fake health care clinics” whose only goal is to trick women into having their babies. “I’m on the medical advisory board for CareNet … and there [are] over 10,000 physicians involved with pregnancy care centers. We give accurate medical information — unlike the abortion clinics who say, ‘Well, you’ve got a blob of tissue in there,’” she told Perkins on “Washington Watch.”

PRCs don’t prey on women in a crisis situation. They don’t push abortion as the only option a woman has in a high-pressure marketing pitch. They show them ultrasounds and offer tangible help. “[We tell women] what a human being is and their stage of development at each gestational age, so the mom actually has the information to make an informed decision. And the pregnancy care centers don’t benefit from this outpouring of love and compassion. They give it free to the patients who come in. … And that’s threatening to the bottom line of Planned Parenthood.”

She’s right. If you’re wondering how effective pregnancy resource centers are, just look at how hard the Left is attacking them. In the process, Family Research Council’s Mary Szoch says:

"Congressional Democrats have once again proven that they are only for one choice — abortion. Instead of passing legislation to support moms in need,      Warren is working to pad the wallets of the abortion industry and silence the voices of those working to give pregnant women in need real options. No Planned Parenthood offers parenting classes, formula, diapers, free babysitting, educational support, or a path forward for a mother and her child. Planned Parenthood offers just one solution: killing an unborn child. Warren’s legislation strives to ensure that Planned Parenthood’s voice is the only one a mother in need hears. She should be ashamed."

But unfortunately for the women in this country, Democrats have no shame. While pro-lifers are busy saving the lives of hundreds of thousands of children, the president’s party is consumed with political theater. And the only show that keeps playing is how out of touch they are with the rest of America.