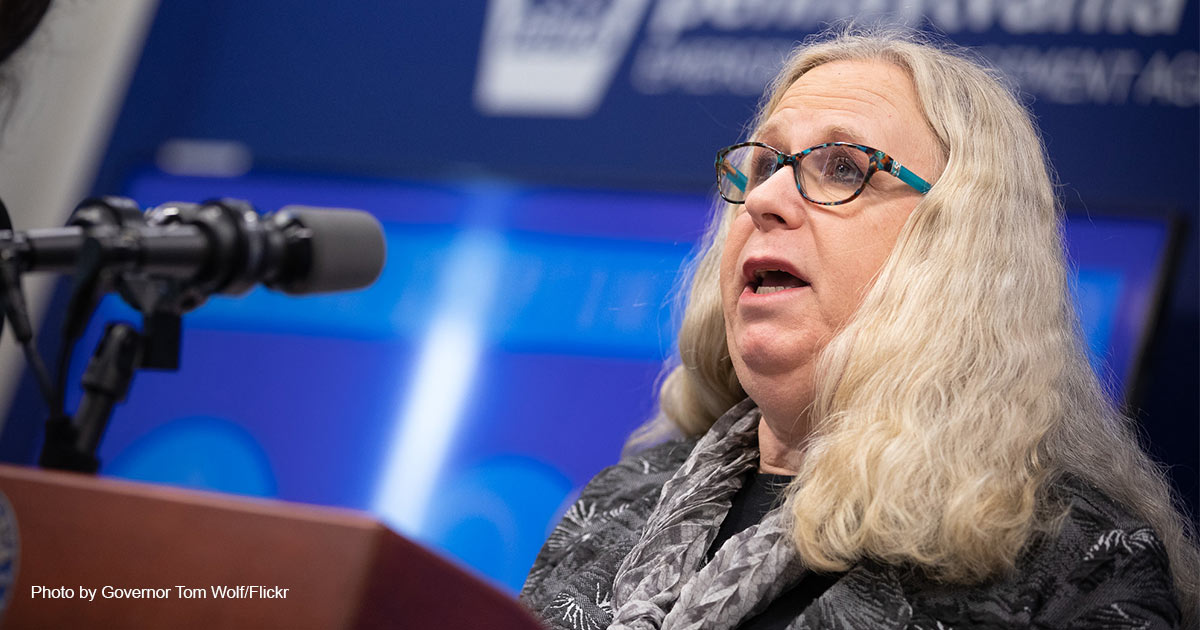 Assistant Secretary for Health Rachel Levine appeared Monday on MSNBC to promote permanent mutilation as a solution for mentally disturbed minors. “We really want … to affirm and to support and empower these youth not to limit their participation in activities in sports and even limit their ability to get gender affirmation treatment in their state,” he said.

What positive sounding verbs: “affirm,” “support,” “empower” — what sinister substance: play along with their mental disorders, refuse to make decisions in the child’s long-term best interest, and permanently afflict their body in ways they’re likely to regret later. The goal, said Levine, is not to limit these children, either to participate in sports or to “get gender affirmation treatment.” It sounds nice, but life without limits isn’t actually good for children. Parents impose all sorts of limits on children for their own good: don’t run into the street, be in bed by nine, no dessert before you eat your vegetables.

Levine’s characterization is also not true. Many states have passed laws to protect girls’ sports against males who claim to be females to win all the prizes, but those laws don’t prevent those males from competing against other males. A few states have begun passing laws to protect children from experimental chemical and surgical procedures that could permanently sterilize, mutilate, or otherwise cause harm. If that’s what “gender affirmation treatment” is, then we can shorten its name to “abusive treatment.”

The rest of the interview was no better. Levine admitted that “trans youth … have more mental health issues,” but insisted “there’s nothing inherent with being transgender or gender diverse, which would predispose youth to depression or anxiety. It’s the harassment and bullying.” Yes, there is. The very essence of identifying as transgender is “an incongruence between their experienced gender and the gender associated with their biological sex,” which psychologists describe with the term “gender dysphoria.” The opposite of euphoria, “dysphoria” means unease or dissatisfaction with life, but Levine would have you believe that this mental disorder is unrelated to depression or anxiety.

When host Andrea Mitchell characterized Florida as “the home of the ‘Don’t Say Gay’ bill” as “notably restrictive,” Levine agreed. “That is correct,” he said, adding that children only need “one supportive adult. That often is a teacher or school personnel.” On the contrary, the phrase “don’t say gay” is not in the bill’s title or the bill’s text, nor would it be accomplished by the bill’s effect.

Rather, Florida’s Parental Rights in Education bill promoted parental oversight and accountability in schools, including barring age-inappropriate classroom instruction of sexual orientation and gender identity for children in grades K-3. But the Left has smeared it as the “Don’t Say Gay” bill so often, it seems like they’ve fallen for their own straw man.

Notice, however, that Levine chose to say the “one supportive adult” is often “a teacher or school personnel” — not a parent. Are parents not involved? If parents aren’t involved, do teachers have the right and authority to “affirm” a child’s desire to change his or her gender identity? It seems like Levine is implicitly endorsing school efforts — like gender closets — to covertly transition children without the knowledge or consent of parents. It almost seems like there is a need for Florida’s parental rights in education bill after all.

Levine is an ideologue on the warpath against states who refuse to cave to gender insanity; last Wednesday, he penned this diatribe in the Miami Herald urging everyone “to base medical decisions and public pronouncements on real data and human compassion rather than slander and stigmatization” — while doing the exact opposite. Florida seems to occupy an oversized portion of his attention, probably because elected officials there are so competent, effective, and unabashed about protecting parents and rejecting left-wing nuttery.

It’s nice to see everything is so hunky dory in Biden’s America that his (unelected) assistant cabinet secretaries can find the time to pen op-eds for local papers attacking the policies of (elected) state legislatures. After all, the top responsibility for officials tasked with implementing laws passed by Congress is “influence public opinion,” right?

Last month, the administration issued “guidance” that had the effect of repurposing Title IX from a mechanism to protect women’s rights into one that erases them, in service to the transgender agenda. A federal judge blocked that guidance from taking effect on Friday.

Levine probably considered that executive action as an example of ways the administration will work to “empower” minors to change their identity and inflict permanent damage on themselves without their parents’ loving restraint. It’s a problem for anyone, anywhere to promote this. It’s worse when it happens in the highest ranks of the federal bureaucracy.