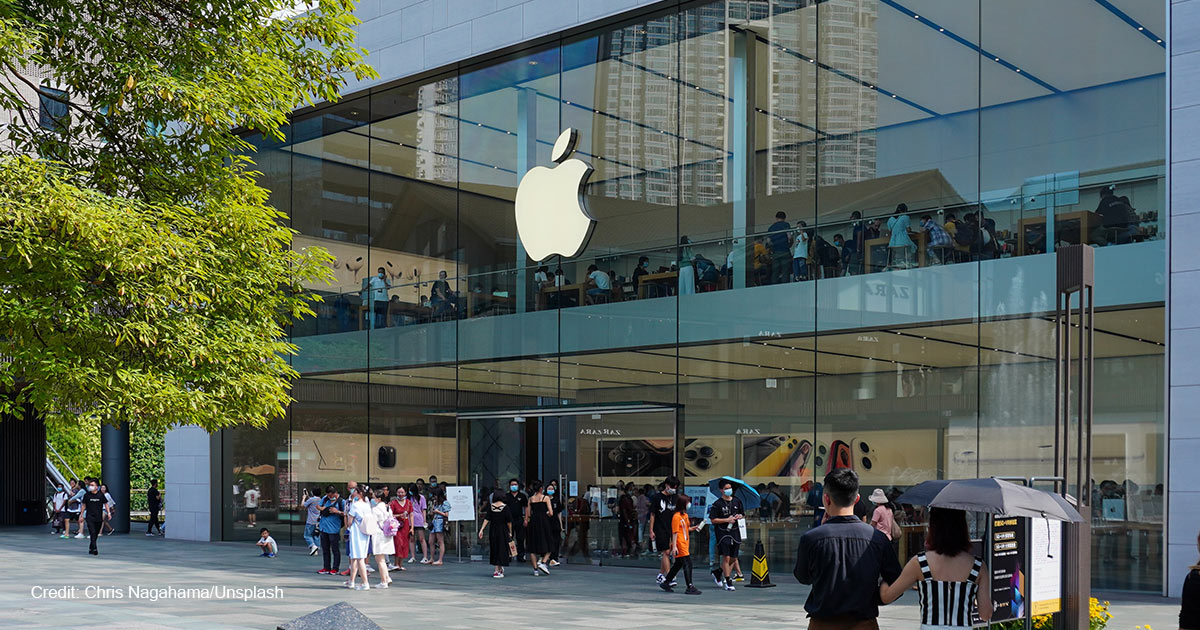 China’s Central Political and Legal Affairs Commission promised Tuesday to “resolutely crack down on infiltration and sabotage activities by hostile forces” as protests against the communist regime’s “zero COVID” policy lingered for a fifth day. In implementing the likely brutal lockdown, the Chinese Communist Party (CCP) will have an ally that might surprise many Westerners: California-based Apple, Inc.

On November 9, Apple partially blocked one iPhone feature protestors had used to evade China’s censorious surveillance system. Protestors had begun to organize by sharing digital posters via AirDrop. One poster shared from “Xi Jinping’s iPhone” in mid-October on Shanghai’s light rail system read, “oppose dictatorship, oppose totalitarianism, oppose autocracy” in Chinese. The AirDrop feature allows iPhone users to share files at close range with any other iPhone, even that of a complete stranger, and it is untraceable. In China’s densely populated mega-cities (China has 17 cities larger than Los Angeles), this made it an ideal tool to secretly communicate protest details to nearby dissidents. Yet, earlier this month, Apple distributed an update limiting AirDrop to a 10-minute time limit — only in China — thereby limiting the effectiveness of such secret communication.

Apple has developed a cozy relationship with CCP authorities since CEO Tim Cook signed a $275 billion deal with China in 2016. Under that deal, Apple would help China’s economy by contracting with Chinese suppliers of hardware and software, partner with Chinese universities, train workers, share manufacturing technology with Chinese companies, and invest “many billions of dollars more.” In exchange, China would loosen a regulatory crackdown that had hurt Apple’s business in China. Since the deal was signed, Apple has excluded Chinese users from web privacy functions that would enable them to avoid government surveillance, including removing VPNs from the App Store in China.

Apple claimed the update was designed to lower the unsolicited spread of files and that it plans to roll out the update worldwide next year. But the CCP may have leaned on Apple to make the change as a way to protect their special status.

In fact, Apple stands to benefit financially from supporting the autocratic regime’s censorship of criticism and suppression of protests. Productivity at a major factory producing iPhones in China ground to a halt last week, affecting more than 10% of global iPhone production capacity and costing Apple “roughly $1 billion per week in lost iPhone sales.” Apple may miss its production target for the iPhone 14 Pro by six million units as a result of the protest. Fortunately for Apple, their friends at the CCP were happy to step in and fix the problem; last Tuesday, Chinese police with riot shields beat protestors at the factory.

Yet Apple first found itself in the troublesome situation because of its earlier decision to deepen its economic partnership with China. Under the CCP’s COVID protocols, Chinese manufacturer Foxconn had turned the factory into a “closed loop,” where workers ate and slept on-site. Workers protested poor living conditions, such as a lack of food and being forced to share quarters with sick coworkers, as well as not receiving pay. “Foxconn never treats humans as humans,” one worker complained. Neither does the CCP, which is currently committing genocide against the Uyghur religious and ethnic minority.

The question is, does Apple, Inc., a U.S.-based company, treat humans as humans? And if it does, then why is it abetting the CCP’s crackdown? Senator Tom Cotton said Apple “could be enabling certain features that would allow [the protestors] to communicate with each other so they can organize even larger protests. We should be taking every step possible to help these Chinese voice their deepest aspirations for freedom.” Instead, “they are serving basically as a vassal to the Chinese Communist Party,” summarized Florida Governor Ron DeSantis (R).

Apple claims to be “committed to demonstrating that business can and should be a force for good,” according to its Environmental, Social, and Governance (ESG) messaging in the United States. Yet in China, it is backing a ruthless government crackdown against public protests. If that’s the only way to do business in China, then perhaps Apple, and other American corporations, should put their money where their mouth is and withdraw their massive investments from a regime that oppresses its people and tramples on basic human rights.