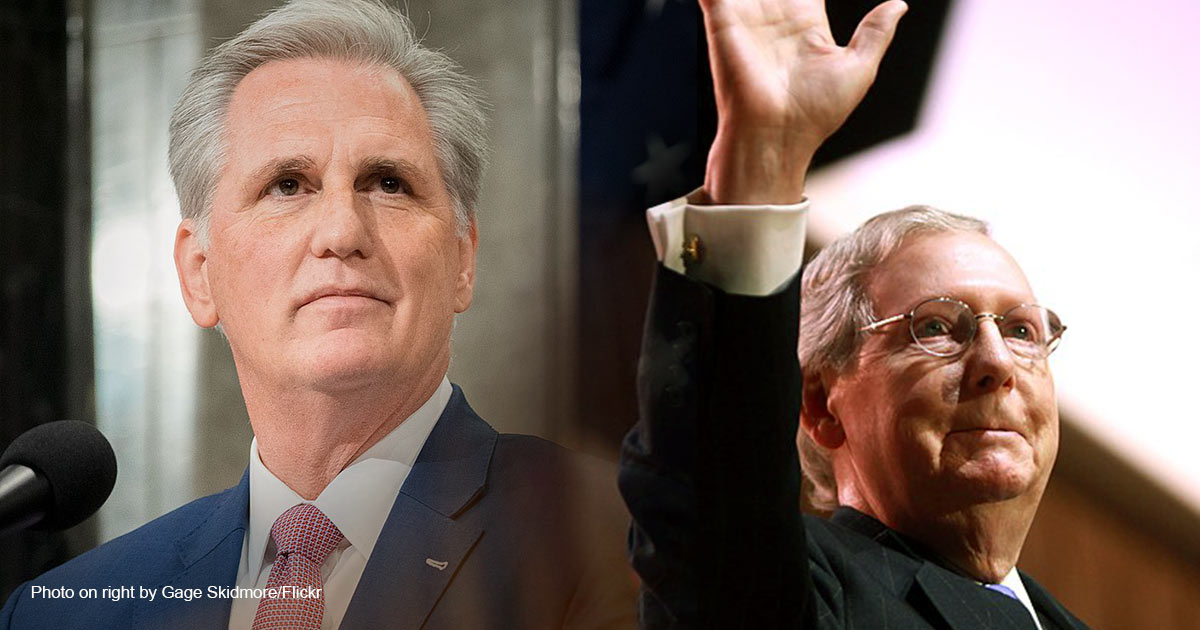 If there’s one thing Republicans are anxious to wrap up this Christmas, it’s Democratic control. But there’s plenty to do first, as both sides make a mad scramble to tie up dozens of legislative loose ends. Government funding tops the list, thanks to procrastinating Democrats who refused to make their most important constitutional obligation — passing a federal budget — a priority. Now, with time ticking down to a government shutdown this month, Speaker Nancy Pelosi (D-Calif.) and Senate Majority Leader Chuck Schumer (D-N.Y.) are hoping Republicans will just roll over and let them set all of the spending priorities for next year. Not so fast, conservatives say.

For most Hill veterans, this whole scenario is like a bad made-for-TV rerun. Every year, the party in power pushes all of the controversial votes up against Christmas, hoping the other side will cave to their demands so they can deck the halls sooner. This time around, Minority Leader Kevin McCarthy (R-Calif.) isn’t in a generous mood. After all, Democrats are the ones who put Congress in this holiday jam by kicking the government funding bills to the end of the calendar year. As a result, everyone has their backs against the wall on 12 massive, multi-billion dollar appropriations proposals that no one’s had a chance to read or debate.

Instead, Democrats are hoping conservatives will agree to swallow another $1.5 trillion dollars in spending before Republicans take the gavel. But, as several conservatives have pointed out, that’s absurd. Republicans shouldn’t be held hostage by the other party’s funding priorities for the whole first year they’re in power — especially when that ignores the will of voters for the GOP to serve as a check on the Left’s runaway spending. Why elect a new majority and then force them to live under the Democrats’ agenda?

To his credit, Senate Minority Leader Mitch McConnell (R-Ky.) sees the ridiculousness of that arrangement and criticized the Democrats for coasting into December — again — “with crucial business unfinished.” Including, as conservatives are quick to point out, vital dollars for our military men and women. “Republicans spent months urging the Democratic majority not to neglect this year’s National Defense Authorization Act, not to leave our Armed Forces to the last minute. Five months ago, I called on our colleagues to process the defense bill as soon as possible. But instead, the majority has prioritized not just gigantic partisan spending sprees… The Democrats’ failure to plan ahead for unrelated liberal pet priorities should not be creating uncertainty and confusion for the brave servicemembers who keep us safe.”

And it’s not just the military that’s holding its breath. Key government agencies, including big-ticket offices like Health and Human Services, Homeland Security, Defense, the State Department, and others, have no idea what their budgets will be for next year. Thanks to Schumer’s fixation on social extremism, the Senate hasn’t done a lick of committee work on appropriations or held a single hearing. These budgets are immense, they’re complicated, and they’re bloated with unnecessary projects. Democrats know that better than anyone, which is why they’re racing to roll all of these huge spending requests into one colossal omnibus, hoping Republicans won’t have the time to give each department’s budget the scrutiny it deserves. As Americans should know from the criminal waste we’ve witnessed in COVID relief, big bills leave plenty of pockets to hide inefficiencies, duplicities, and pork.

On Tuesday, Pelosi told reporters her “strong preference” is an omnibus bill. I’ll bet it is. She wants to fatten up the Left’s projects long-term so that their radical priorities are protected from a stingier GOP.

An exasperated McCarthy couldn’t understand why anyone in his party would bend to Democrats’ demands. “We’re 28 days away from Republicans having the gavel,” he told Fox News’s Laura Ingraham. “Wait ‘til we’re in charge. …We would be stronger in every negotiation. So any Republican that’s out there trying to work with them is wrong,” he argued.

That warning was largely for Senate Republicans, who, as Americans have seen, seem willing to give away the farm on just about anything lately. Rep. Chip Roy (R-Texas) can only shake his head, pointing out that some members are “working overtime to try to pass an omnibus spending bill in collusion with Democrats rather than a short-term continuing resolution… right after joining with Democrats to undermine marriage and religious liberty.”

Quena Gonzalez, senior director for Government Affairs at Family Research Council, insists that congressional leaders have no one to blame for this mess but themselves. “Democrats have known since March, when they finally passed last year’s funding (seven months late) that the government funding bill for Fiscal Year 2023 would be needed by September. They waited until the last minute, choosing instead to focus on massive ‘emergency’ spending programs. Then, when some Republicans objected to their multi-billion dollar bill, they punted on it in September, once again choosing to focus all of their energy on passing yet another enormous, inflation-inducing spending bill. So the current crisis over government funding, if it is one, is one entirely of Democrats’ making,” he told The Washington Stand. “Even with single-party rule in Washington for two years, their track record on passing bills to fund the government is abysmal. Republicans should not bail them out now by letting Nancy Pelosi and Chuck Schumer set the agenda for the next eight months.”

Also hanging in the balance, as Gonzalez’s colleague Connor Semelsberger explains, are longtime pro-life protections like the Hyde, Weldon, Dornan, and Helms amendments, which — if Democrats get their way — would be entirely stripped from the budget text. On top of opening the floodgates to taxpayer-funded abortion, the Left is proposing massive increases in pro-abortion Title X funding and international “family planning” funds — both of which go directly into the pockets of Planned Parenthood.

“For the last two years Democrats in Congress have actively worked to remove longstanding bipartisan policies that protect taxpayers from subsidizing the abortion industry,” Semelsberger told TWS. “Thankfully, to this point, their efforts have not been successful. But now, since the overturning of Roe v. Wade, the Biden administration has been on a war path to do everything they can to underline the abortion industry — including violating federal statutes that explicitly prohibit taxpayer funding of abortion. Congress should not reward the Biden administration’s rogue actions promoting abortion with a year-end spending deal that increases agency funding.”

At the end of the day, Senator Rick Scott (R-Fla.) told Family Research Council President Tony Perkins on “Washington Watch,” Republicans have “got to finally become a brick wall to this excess spending.” And they need to start now. “These [are] bad policies that are hurting our families. …We’ve got to say we’re not going to do this.” They made the decision not to pass a budget, he said. It’s time to stop compromising.