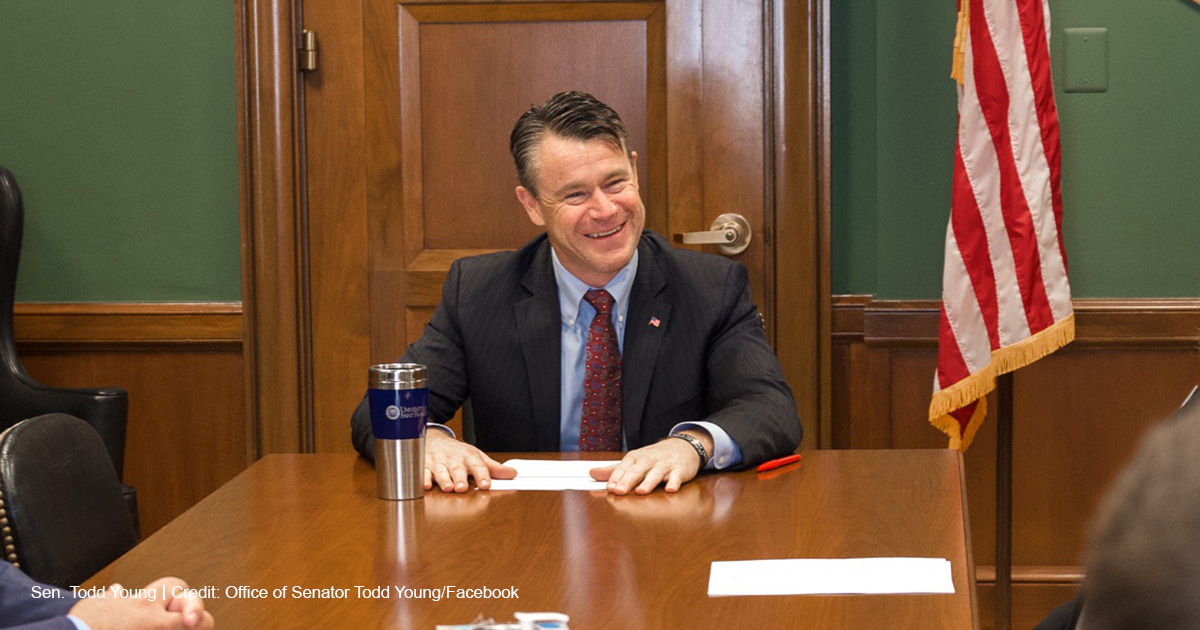 The rumors that Congress might be working right up to Christmas might come as a relief to the 12 Senate Republicans who voted for the radical Respect for Marriage Act. Facing constituents can’t seem like a very enticing prospect, not after the heat they’ve already been taking from national groups. Back home, the knives are out for the dozen senators who helped the Left take a hammer to religious freedom. And in some local GOP chapters, that means throwing a counterpunch.

In Indiana, where Senator Todd Young (R-Ind.) tried to get in front of the fury with a defensive op-ed in the Indianapolis Star, the outrage is only building. Cass County Republican Chairman David Richey took the unusual step of announcing an official censure of Young — sparking a statewide movement for other counties to do the same.

Richey’s letter to the former Marine was full of emotion. Like most of the senator’s original supporters, he was genuinely surprised and insulted that Young would so quickly discard the party’s values, especially after his November 8 reelection. “Unfortunately, it is because of your vote that the Cass County Republican Central Committee voted to send you this letter of censure,” he started. “This was not a decision that was made abruptly nor without a large amount of discussion. Your decision elicited feelings of anger, disbelief and even a sense of betrayal. We are not just fiscal conservatives, but social conservatives as well.”

Your opinion piece published in the Indianapolis Star on November 30 only confirmed our concerns that you have departed from the deeply held views of the vast majority of your fellow Hoosiers. The Republican party of Indiana endorsed your running as a Republican Senator from our great state with the belief that we could entrust you with representing our values. On this matter (regarding same-sex marriage), you had previously stated that you felt matters like this were best handled by the States, not in the Federal venue. Now we find — right after we endorsed and voted for you in November — that you’ve changed your mind.

Using the feigned concern generated by the progressive left in the wake of the June decision overturning Roe v. Wade as cover, you have joined the radical left in pushing this unnecessary bill, which will have a chilling effect on religious freedom and further undermine the traditional family. In fact, the “Respect for Marriage Act” will do nothing to change the status of same-sex “marriage” or the benefits given to them by the 2015 Obergfell [sic] decision. …

The Cass County Republican Party embraced and supported you when you ran to replace Senator Coats, and in your recent reelection campaign against Tom McDermott. We believed your pledges that you would support and advance our values in Washington. Your recent actions are a departure from those promises, and a betrayal of Cass County citizens and all Hoosiers who have given you, their support.

For most conservatives, that’s the real rub. Young waited until he was safely reelected to cast such an abominable vote. His fellow two-timers, Cynthia Lummis (R-Wyo.), Dan Sullivan (R-Alaska), and Joni Ernst (R-Iowa), were just as calculating, knowing it would be years until their constituents could hold them accountable for such a criminal rejection of core values.

Richey bemoaned that bait-and-switch, insisting that Indiana deserved better than a part-time conservative. “We want a Republican Senator to represent our positions in the Senate. … We appreciate your opposition to abortion and your support of the right to bear arms, but this vote, on your part, could destroy support for you across a wide spectrum of Republican voters.”

Cass County is doing its part to make that a reality, contacting every Indiana county chairman and urging them to censure Young as well. Sources inside the state provided The Washington Stand with Richey’s message to other precinct chairmen, urging them to respond to the senator’s vote with force:

During [our last] meeting the Cass County Republicans felt that waiting until the next election cycle to share how upset they were would not accomplish anything and therefore chose to write this letter of Censure to Senator Young. I was asked to send it to him (which I did this evening) and then send it on to every other County Chairman in the state asking you and your committees to follow suit. I leave that in your hands. Please see the attached letter and discuss it with your Precinct Chairman. The Cass County Republicans do not feel they are alone in their feelings of betrayal shown by the Senator.

In states like North Carolina, where voters are seething over Senator Thom Tillis’s (R) double-dealing on marriage, similar reprimands may be brewing.

The backlash will continue to grow, as the seriousness of what these 12 senators and 39 congressmen have done sinks in. As Family Research Council President Tony Perkins warned, “This is a sobering moment in our nation’s history. America is now charging full steam ahead down a path largely unexplored by any human society in history.”

For believers, who fought with all their might to pull our country back from this precipice, the effort mattered. After the final vote in the Senate, Senator Krysten Sinema (D-Ariz.) told reporters that “the opposition was very, very strong.” As far as she’s concerned, “the attempts to derail this piece of legislation were probably more focused and robust than any other bills I’ve worked on in the last two years.” While 12 Republicans turned their backs on their base, the party platform, and moral truth, sources at the Capitol say that it could have been much worse.

“This is a discouraging outcome,” Perkins said, “but Jesus warned His disciples that difficult and evil times were coming. He gave that warning so they would not lose their faith or joy. He said we should be at peace in these turbulent times. ‘These things I have spoken to you, that in Me you may have peace. In the world, you will have tribulation, but be of good cheer, I have overcome the world’” (John 16:33).