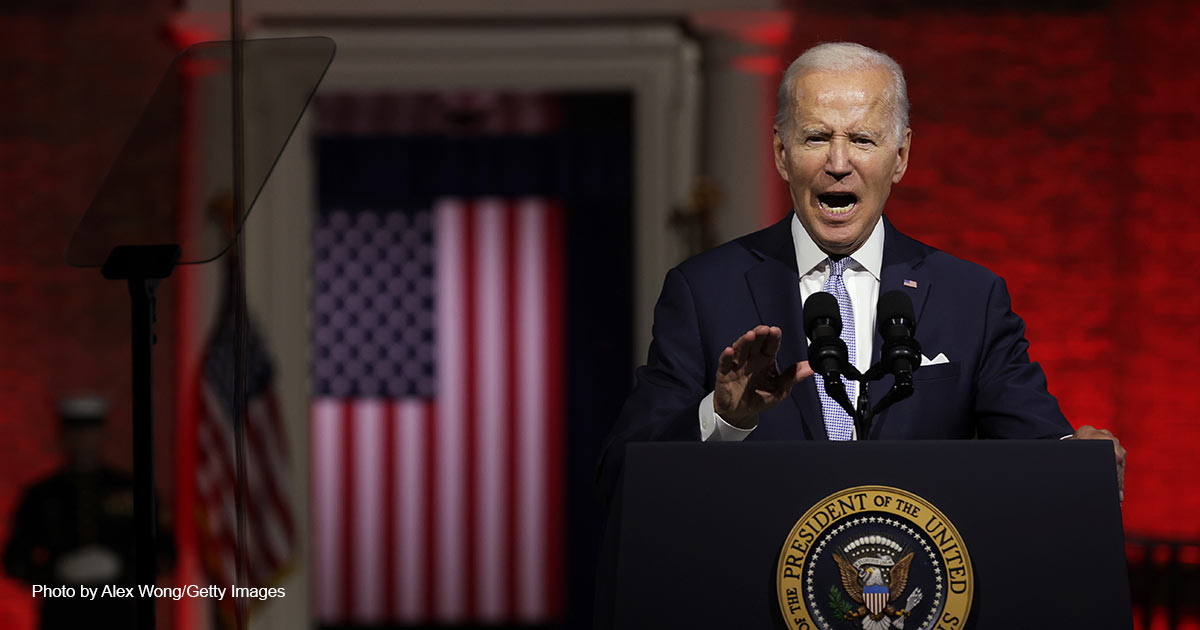 Mr. President, America is Under Threat - Mostly from the Left

President Biden gave a national address about threats to “our democracy.” Although this is a misnomer (think “republic” instead), some of the concerns he expressed in his speech about the perils facing our country are valid.

There are those whose allegiance to Donald Trump seems blind. Their anger over the direction of the nation is such that they are willing to suspend common sense and believe nonsense.

Such persons are in the minority of the GOP, as the president well knows. But like any good demagogue, in his speech on “the battle for the soul of America” he constructed his straw-man and then lit him with rhetorical fire.

Oh, I get it: If you believe Roe v. Wade was wrongly decided or that marriage is the union of one man and one woman, you’re trying to claw America back to an age darkened by ignorance and bigotry.

Consigning pro-life and pro-natural marriage Americans to the lunatic fringe of American public life is more than dishonest or even insulting. It is dangerous.

Dangerous because in his speech, Biden essentially dehumanizes a whole segment of the American people. In doing so, he divorces them from the country for which many of them have served and fought, worked and prayed. He does not appeal to what Lincoln called “the better angels of our nature” but castigates millions of Americans as virtual demons.

To view a large portion of one’s fellow citizens in this light is to threaten the very nature of a society of which human dignity is a principal cornerstone. It invites the kind of violence my FRC colleagues and I experienced in 2012, when an LGBTQ-inspired gunman came to our building and planned to kill as many of us as he could. Only the heroic actions of our building manager — and a man I am grateful to call my friend, Leo Johnson — stopped him.

Since the overturning of Roe in July, violence against pregnancy resource centers has become almost common. There have been dozens since the leak of the early draft of the Supreme Court ruling. You knew that, right? I mean, the media are flooded with stories about this kind of squalid behavior. Or, maybe not …

Of course, Biden failed to mention these kinds of threats. The violent demonstrations of the past three years received no mention in his speech. Antifa, the radical elements of Black Lives Matter, and related groups, organizations composed of persons who have done great damage to lives and property, were absent from Biden’s jeremiad. Such things are not about racial justice but personal rage and public anarchy. Seem kind of like “threats to democracy” to me.

The president has also picked up a theme all too familiar to those of us who are conservative: “semi-fascism.” Well, yes, there are those who would silence dissent, coerce behaviors, demand the violation of personal convictions, and insist on the affirmation of things their opponents find abhorrent. And almost all of them identify with the Left.

Consider the following: Pornographic literature on the shelves of elementary schools. The “erosion of a campus culture of free expression and open inquiry” at out colleges and universities. The endless outpouring of pro-LGBTQ propaganda on the news and in the entertainment industry. The wedding of coercion and repression (commonly known as “cancel culture”) that confine not expressions of bigotry but simple, honorable, and civil disagreements about moral and political issues. The demand that myriad Americans suspend their religious liberty due to the agenda of social extremists. These and related things are ongoing evidence of liberalism’s insistence on conformity to its view of the world. Conformity, or else.

There’s one thing Biden is right about: “America must choose to move forward or to move backwards.” Backwards to a more primitive and base society in which the unborn are consigned the moral value of a hangnail, marriage is merely a matter of affection and consent, dissent is crushed, and liberty redefined. Or forward to the opposite of these things, to a nation where every life is valued, every race is honored, and where opportunity, responsibility, liberty, civility, and integrity matter.