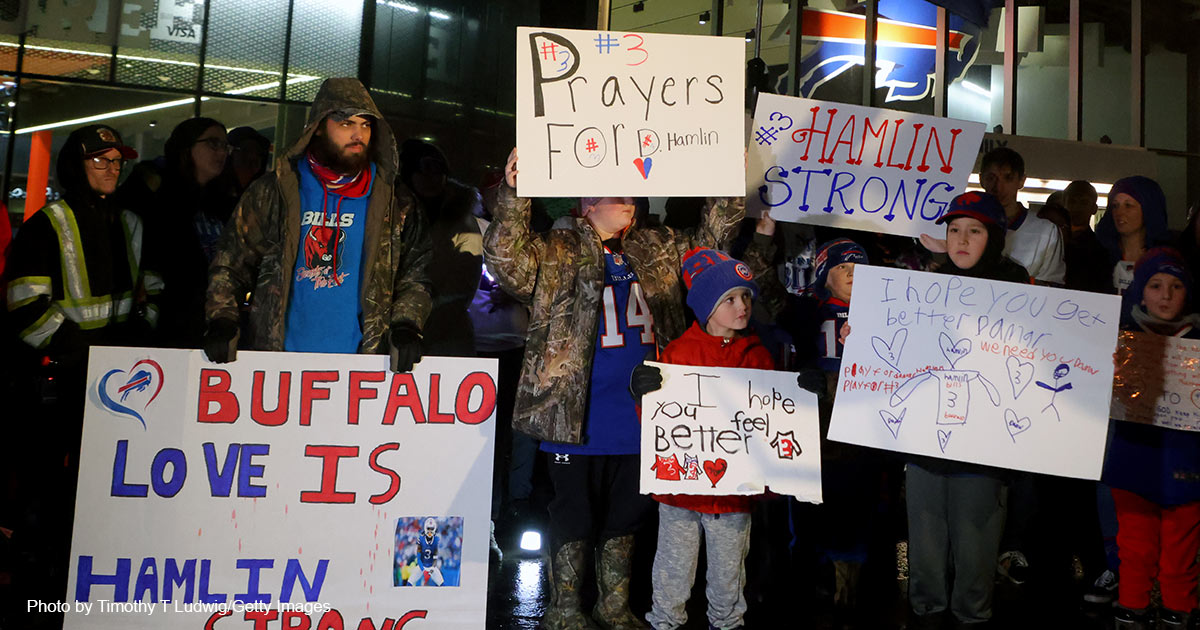 Nation Unites in Prayer for Damar Hamlin after On-Field Collapse

American sports fans and others experienced a rare moment of unity on Tuesday, unanimously calling for prayer for 24-year-old Damar Hamlin. Hamlin, a safety for the Buffalo Bills, collapsed on-field from cardiac arrest after making a tackle during a Monday night game against the Cincinnati Bengals. After medical personnel revived him by performing CPR, Hamlin was transported to the University of Cincinnati Medical Center, where he remained in “critical condition” as of Wednesday morning.

In a statement issued on Tuesday, the Hamlin family asked fans and well-wishers, “please keep Damar in your prayers.”

That’s exactly what has happened. At noon on Tuesday, dozens gathered to pray for Hamlin at Crossroads Uptown, a church situated only blocks away from the hospital, with hundreds more tuning in online. Tuesday night, a prayer vigil outside the hospital saw Bills fans and Bengals fans join together in prayer for Hamlin’s recovery. His teammates joined in; “Please pray for our brother,” tweeted quarterback Josh Allen. Offensive lineman Rodger Saffold even prayed himself, “I pray God gives him mercy and brings him back to us.”

The outpouring of prayer was only beginning. Said the Associated Press, “the Bills changed their social media avatar to that of Hamlin’s No. 3 jersey with the words ‘Pray For Damar.’ The other 31 teams and the NFL quickly followed suit.” (The NFL indefinitely suspended the Monday Night Football game between the Bills and the Bengals after Hamlin’s 1st-quarter collapse.) Even on Wednesday morning, “Praying for Hamlin” was trending on Twitter, featured in more than 50,000 tweets.

The most dramatic moment came on Tuesday night, when ESPN analyst Dan Orlovsky prayed for Hamlin during NFL Live. “Maybe this is not the right thing to do, but it’s just on my heart that I want to pray [“It is,” interjected fellow analyst Marcus Spears] for Damar Hamlin right now. I’m going to do it out loud. I’m going to close my eyes. I’m going to bow my head. And I’m just going to pray for him,” said Orlovsky.

And then Orlovsky prayed this prayer of lament:

God, we come to you in these moments that we don’t understand, that are hard, because we believe that you’re God, and coming to you and praying to you has impact. We’re sad, we’re angry, and we want answers, but some things are unanswerable. We just want to pray, truly come to you, and pray for strength for Damar, for healing for Damar, for comfort for Damar, to be with his family, to give them peace. If we didn’t believe that prayer didn’t work, we wouldn’t ask this of you, God. I believe in prayer. We believe in prayer. We lift up Damar Hamlin’s name in your name. Amen.

Perhaps most striking of all, Orlovsky’s prayer, broadcast nationwide, has met with encouragement, not the scorn and ridicule typically heaped upon prayer in the aftermath of tragedy. The same is true of other outpourings of prayer. The NFL, although extremely divided over taking a knee for the national anthem, has unanimously approved taking a knee for Hamlin’s recovery. Even people who confess that they don’t pray, in this shocking moment, are praying or calling for prayer. Anyone who disagrees with this outpouring of prayer has kept his thoughts to himself.

This moment demonstrates that Christianity still maintains incredible cultural influence in America, despite decades of routine mockery and secular infiltration. When unexpected, unexplained tragedy strikes, ordinary citizens and influential people across America’s institutions alike turn to prayer. In matters of life and death, finding distraction in an entertaining ball game is inappropriate, insignificant quarreling is inappropriate, emotionless detachment is inappropriate. What is appropriate in a crisis is prayer, as thousands of Americans have recognized this week.

The outpouring of prayers to God also demonstrates that irreligion cannot adequately equip a person to deal with life’s inevitable hardships. We might pray that the medical team treating Hamlin are skillful, careful, and successful, or we might offer thanks for the blessings of modern technology, but no one would imagine praying to the hospital and its staff. They cannot control life and death, illness and health. With all our scientific, humanitarian accomplishments, we each remain helpless against our appointed day of death. Even those who prefer not to think about it know, deep inside, who has power over death. When agnostics and humanists offer prayers, they tacitly admit the existence of a power higher than they are willing to admit.

These reflections should greatly encourage Christians but soberly warn unbelievers. In calamity, we all recognize our own helplessness and need for salvation, and we lift up prayers to heaven. But if I refuse to listen to God in good times, what right do I have to demand that he listen to me in bad times? If I choose to live my life without God, I may just find myself without God when I most need him. God exhorts sinners, “Seek the Lord while he may be found; call upon him while he is near; let the wicked forsake his way, and the unrighteous man his thoughts; let him return to the Lord, that he may have compassion on him, and to our God, for he will abundantly pardon” (Isaiah 55:6-7). When calamity strikes, it may be too late.

However, this same sober warning fills the Christian with joy and gladness because our position before God is different. We have trusted in the Lord, who is mighty to save. So, when calamity strikes and we lift up prayers to heaven, we know to whom we pray. We are not ignorant of God, and we know he will answer us.