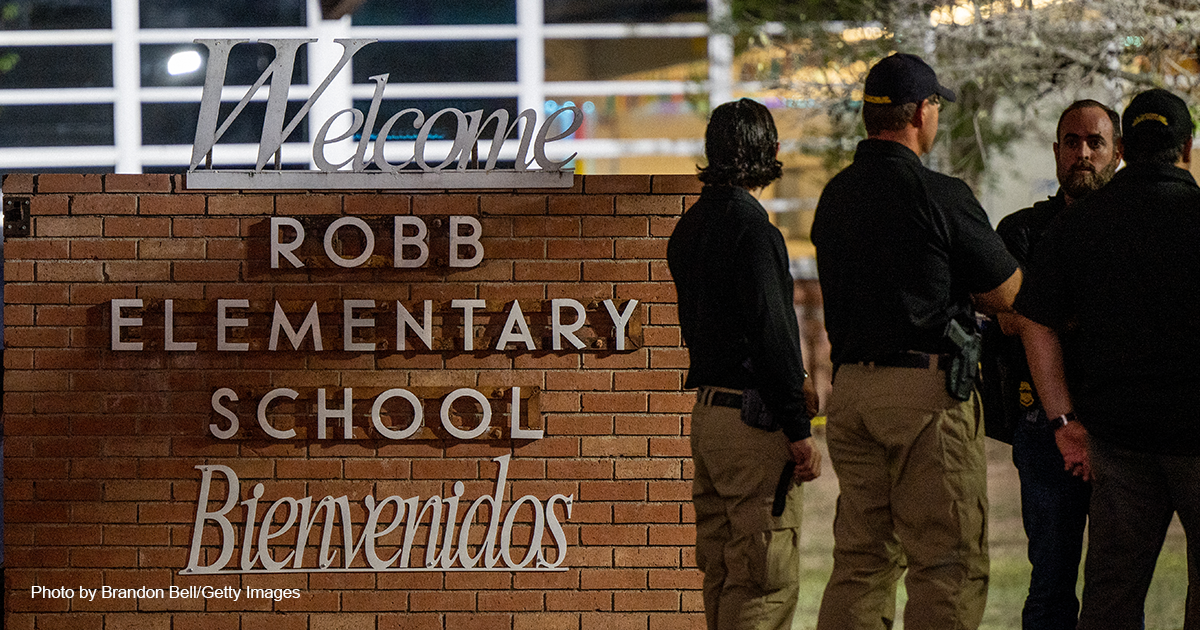 It was the last conversation they would ever have. On May 24, sometime between 11:44 a.m. and 12:50 p.m., 44-year-old Eva Mireles called her husband, Ruben Ruiz, and told him “she had been shot and was dying,” in the words of Texas Department of Public Safety Director Colonel Steven McCraw, who testified at a Texas Senate hearing on June 21. No one knows what else passed in that last, private moment between husband and wife — were there tears? Did he say, “I love you?” Did they recall their favorite memory? — and it’s best to leave it that way.

Mireles taught 4th graders at Robb Elementary School in Uvalde, Texas, when an 18-year-old entered the classroom and began shooting. Both teachers and 19 students died. Ruiz, her husband, is a police officer for the school district. He was on the scene that day.

As a state investigation continues untangling the truth from initial, false reports, one thing about the Uvalde situation is clear: law enforcement’s unreasonable delay amounted to an “abject failure,” said McCraw. Instead of standing around and waiting for more gear, in active shooter situations, law enforcement officers are trained to hunt down and take down the perpetrator. “I don’t care if you have on flip-flops and Bermuda shorts,” McCraw exclaimed, “you go in.” Children inside kept calling 911, but the police didn’t move. On top of this, state investigators “have great reasons to believe” the classroom door wasn’t even locked; the police didn’t bother to try.

As a result of the investigation, the school district chief of police, the “incident commander,” was placed on leave Wednesday. A month after the Uvalde massacre, the police’s dereliction of duty — one might even say cowardice — seems to be a major factor.

But not all the police. Not Ruben Ruiz.

Can you imagine getting such a terrible phone call from your wife, on a Tuesday like any other? “I’ve been shot. I’m dying. Please come help me.” What would you do in that situation? Gun or no gun, badge or no badge, official capacity or none, you should charge the classroom! Classroom? You should single-handedly charge the Kremlin if you had to. And it should take more than ordinary force to restrain you. “Love is strong as death/ Jealousy is fierce as the grave. …/ Many waters cannot quench love/ neither can floods drown it” (Song of Songs 8:6-7).

And that’s just what Ruiz did. “And what happened to him, is he tried to move forward into the hallway,” narrated McCraw. “He was detained, and they took his gun away from him and escorted him off the scene.”

Ladies and gentlemen, I give you: Ruben Ruiz, a real man.

Besides his official capacity, which authorized him to use force in all sorts of situations, Ruiz was husband to Mireles. As her husband, Ruiz had both the duty and the right to protect her. He loved his wife (Ephesians 5:25) enough to lay down his own life for hers (John 15:13).

How many police officers did it take to subdue Ruiz? They hemmed him in. They rendered him powerless. They forced him away from where his duty lay. They targeted him, instead of aiding him to take down the real threat. He alone stood up, and they knocked him down. That’s how our society treats real men. And we wonder why young men drift without purpose, embrace toxic characteristics, or turn violent. If only their masculinity was allowed a proper outlet.

Now, I’m sure the police officers in the hallway believed they were doing Ruiz a favor. He was emotional — perhaps even distraught — he would thank them later, when he had calmed down.

I’m equally sure they did Ruiz no favors. I’m confident Ruiz’s only regret is that they managed to stop him. I’m sure he would prefer anything that could have happened to him — death, permanent injury, imprisonment, termination — if he could have saved his wife’s life, or even seen her once more before she died. But he was denied even the opportunity to try and save her by the same over-protective instincts that barred hospital visitors during COVID, forcing patients to die alone. How can society not understand that some things are more important than life?

Thankfully, our culture is not the final judge. Even if our culture prevents real men from acting on the courage and boldness within them, it doesn’t follow that their manly qualities are thus wasted or worthless. Even if they are outwardly restrained from doing good, and feel helpless against a hostile culture, their manhood is measured by how they respond. God sees. Their worthiness may be unrequited by our foolish culture, but those who persist in doing good will receive their reward in heaven.