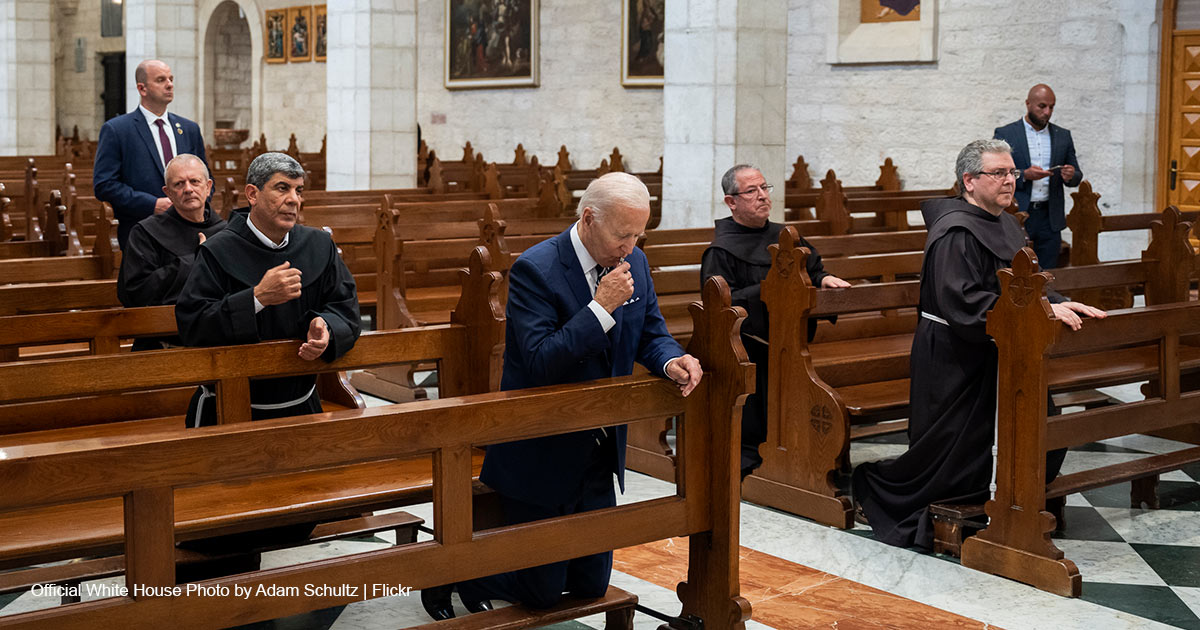 On Friday, it came to light that during a Democratic National Committee fundraiser held in New York this week, President Biden made the following comment in reaction to pro-life legislation introduced by Senator Lindsey Graham (R-S.C.) that would limit elective abortion at 15 weeks gestation:

Think about what these guys are talking about. No exceptions — rape, incest — no exceptions, regardless of age. I happen to be a practicing Roman Catholic. My church doesn’t even make that argument now.

In the space of just 33 words, Biden uttered two outright lies. The first is that Graham’s bill does not include exceptions in the cases of rape and incest — the bill’s language explicitly does allow for abortion in those cases.

The second lie is the contention that the Catholic Church has somehow changed its position recently with regard to abortion. By saying the church “doesn’t even make that argument now,” Biden seems to be implying that the church was once against abortion in the cases of rape and incest, but is now in favor of abortion in these exceptional cases, because, you know, that’s what is popularly acceptable. This is false.

Human life must be respected and protected absolutely from the moment of conception. … Since the first century the Church has affirmed the moral evil of every procured abortion. This teaching has not changed and remains unchangeable. Direct abortion, that is to say, abortion willed either as an end or a means, is gravely contrary to the moral law (CCC 2270-2271).

In the Catechism’s entire section on abortion, which spans six separate segments, there is no mention of abortion being acceptable in the cases of rape and incest.

Mary Szoch, director of the Center for Human Dignity at Family Research Council and a Catholic, told The Washington Stand that the current pope and his two predecessors have reiterated the church’s position on multiple occasions.

“As the Catechism clearly states, the Catholic Church has always been opposed to the grave evil of abortion,” she noted. “This is a church teaching that has not and cannot ever change. Pope after pope has reiterated this, with Pope John Paul II urging Americans to ‘stand up for life!’ Pope Benedict made it clear that there may be diversity of opinion among Catholics about waging war and the death penalty, but ‘not however with regard to abortion.’ Pope Francis said abortion was like ‘daily murder.’ Despite what he says, President Biden has clearly rejected the teachings of the church he claims to be a part of. We should all pray for his conversion.”

This isn’t the first time Biden has muddied the waters about the doctrine of the Catholic Church regarding abortion. During his long history of flip-flopping on his position on abortion over his four-decade career in Congress and in the White House, Biden wrote in 2007 that he is “personally opposed” to abortion but that he does not feel he has the “right to impose [his] view on the rest of society.”

But this view is also directly contrary to the Catholic Church’s teaching regarding the responsibility that lawmakers have to protect unborn life in the law:

The inalienable right to life of every innocent human individual is a constitutive element of a civil society and its legislation:

“The inalienable rights of the person must be recognized and respected by civil society and the political authority. These human rights depend neither on single individuals nor on parents; nor do they represent a concession made by society and the state; they belong to human nature and are inherent in the person by virtue of the creative act from which the person took his origin. Among such fundamental rights one should mention in this regard every human being’s right to life and physical integrity from the moment of conception until death.”

“The moment a positive law deprives a category of human beings of the protection which civil legislation ought to accord them, the state is denying the equality of all before the law. When the state does not place its power at the service of the rights of each citizen, and in particular of the more vulnerable, the very foundations of a state based on law are undermined. ... As a consequence of the respect and protection which must be ensured for the unborn child from the moment of conception, the law must provide appropriate penal sanctions for every deliberate violation of the child’s rights” (CCC 2273).

By publicly advocating for legislation and enacting executive orders that allow abortion on demand, Biden is not only disregarding his own church’s teaching, but is actively working to undermine it.

Let us pray that President Biden will undergo a deep and profound conversion of heart and develop the courage to actually live by the teachings of a faith that he publicly professes.