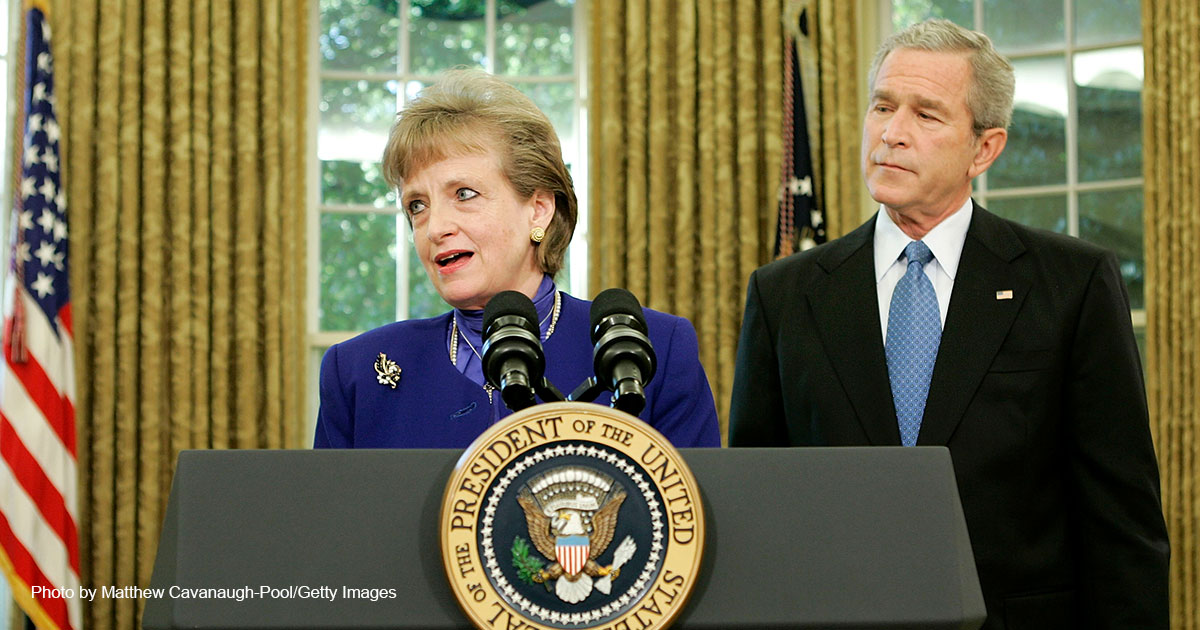 The Road to Dobbs: The Inside Story of How Pro-Lifers Held the Line against SCOTUS Moderates

Pro-life advocates won an indelible victory on June 24 when the Supreme Court overturned Roe v. Wade. But they may have forgotten one of the most important skirmishes that paved the long road to this historic victory: Seventeen years ago, pro-life Christians defied a Republican White House pressure campaign and insisted the president withdraw his first choice for the court.

The flashpoint came in 2005, when then-President George W. Bush selected Harriet Miers to fill the seat once held by Sandra Day O’Connor. Miers, a corporate attorney with no judicial experience and no clear legal philosophy, in no way resembled the constitutionalist judges Bush promised to appoint during his reelection campaign one year earlier. Pro-life Christians, evangelicals, and values voters who powered Bush to victory publicly broke with the party — and historians can draw a straight line from the Miers fight to the fall of Roe v. Wade. “The overturning of Roe v. Wade is a testament to the politics of principle and perseverance,” columnist, presidential adviser, and three-time presidential candidate Pat Buchanan told The Washington Stand.

“Such opposition from within the conservative movement was all but unheard of before Miers was nominated,” wrote NPR (at your expense). Until that time, the relationship between Christians and the GOP had been one of misplaced trust, betrayal, and growing impatience.

A Generation of Disappointment

The 20th century’s wave of judicial activism, which influenced judges in both parties, crested in Roe. “I have been in this fight since 1973, since the start of Nixon’s second term when Roe v. Wade came down, and three of the justices we had successfully elevated” to the court “voted for Roe, with only the youngest Nixon appointee, Bill Rehnquist, joining Kennedy Justice Byron ‘Whizzer’ White in dissent,” Buchanan told me.

While the pro-life movement had opposed O’Connor over her abortion voting record, and conservative activist Howard Phillips presciently testified that Souter would serve as a liberal, most Republicans’ SCOTUS nominees gave no indication they supported Roe. The mercurial power-broker Justice Anthony Kennedy, who ascended to the court after Robert Bork’s vicious confirmation hearings in 1988, exemplified the “stealth” pro-life justice who would “grow in office” after his appointment. Republican presidents routinely gave pro-life leaders a “kind of wink-and-a-nod” that their appointees were rock-ribbed originalists, “and they never worked out,” Family Research Council President Tony Perkins told TWS.

The pro-life movement suffered its worst loss in 1992’s Casey v. Planned Parenthood decision when the majority-Republican court, which many believed would overturn Roe, affirmed abortion instead. All five of the justices who upheld the “right to choose” were Republican appointees. Bill Clinton then named two justices to the court (replacing pro-life White with Ruth Bader Ginsburg). While every justice appointed by a Democrat for the last half-century has supported Roe v. Wade, so did half of the justices named by Republicans from Ronald Reagan through George W. Bush. Decades of conservative votes yielding liberal victories suggested conservatives should change their strategy.

Suddenly in 2005, George W. Bush had an opportunity to fill two Supreme Court vacancies. He nominated John Roberts as chief justice before announcing his second appointee: Harriet Miers. Since she had no judicial record, the White House’s outreach focused on her faith, noting that she attended a pro-life church in Texas and once endorsed a pro-life amendment while running for office in Texas in 1989. But some raised their eyebrows when then-Senate Minority Leader Harry Reid (D-Nev.) announced he had recommended Bush appoint Miers, adding she would bring a “different and useful perspective” to the Supreme Court. His support made Republicans wonder: Useful for whom?

While a handful of faithful evangelicals supported Miers nomination, most told the Bush administration they could no longer accept an unknown quantity as justice — and suffered the fallout. “I had some very loud phone calls with Karl Rove over that nomination,” Perkins reminisced. “There was a great deal of pushback from the White House,” former presidential adviser and candidate Gary Bauer told The Washington Stand. “They were not happy and felt we should take the president at his word on this. But we as pro-life voters had taken the word of a president before only to be deeply disappointed.”

The Bush family brought pressure to bear on the holdouts, questioning their loyalty. “That’s exactly what we appealed to,” said Bauer. “Without pro-life voters, George W. Bush would not be president. Millions of them were not even Republicans. The loyalty needed to be to the people who invested in President Bush and expected him to fulfill his promises.”

Rather than bend, several members of The Arlington Group — a coalition of evangelical and pro-life conservative leaders, including FRC — wrote a letter publicly opposing Miers’s appointment. “She was not a nominee that these co-signers could support. They had grave concern about her nomination,” Shannon Royce, who was then-executive director of The Arlington Group and is now president of the Christian Employers Alliance, told The Washington Stand. “There was no paper trail, but she didn’t have the credentials to make her an appropriate choice. She had no judicial background. She just wasn’t the right choice.”

A growing chorus of conservatives — including the evangelicals, Buchanan, Richard Viguerie, Ambassador Alan Keyes, Don Feder, and the late Phyllis Schlafly — took the intraparty fight public. “Ms. Miers’s qualifications for the Supreme Court are utterly non-existent. She has not only not ruled or written on any of the great controversies of our time on religion or faith [or] morality, she has shown no interest in them in 40 years,” said Buchanan on “Meet the Press.” Her lack of track records makes her nomination “a faith-based initiative.” Similarly, the choice seemed a slap in the face to rising scholars who embraced original intent. “By passing over the many clearly qualified persons, male and female, to pick a stealth candidate, George W. Bush has sent a message to aspiring young originalists that it is better not to say anything remotely controversial,” wrote Bork in the Wall Street Journal.

Evangelicals, by now more seasoned at the art of politics, did not reserve themselves to media appearances and memoranda. “The other thing — and I think this might have been more important — we talked to pro-life senators on Capitol Hill and shared with them our concerns. When those senators met with her and asked her some fairly fundamental questions about constitutional law, and related issues, there was much concern with her inability to handle those questions,” said Bauer. Miers told one senator she would need to “brush up” on constitutional law before her hearings.

At the White House, panic set in. Former Senator Dan Coats (R-Ind.), whom Bush tapped to lead Miers’s nomination to victory, said he first knew she would fail when his fellow Republicans began saying she may not “perhaps have the experience and the values” they would need to support her, echoing the Arlington Group. Then-Senator Sam Brownback (R-Kan.) said conservatives harbored “a deep concern that this would be a Souter-type candidate” on social issues. “The circumstances seem to be similar: Not much track record, people vouching for her, yet indications of a different thought pattern earlier in life.”

Soon, additional facts would bubble to the surface about Miers. She had made donations to the Democratic National Party and Al Gore’s 1988 presidential campaign, and a year later she sought the favor of an LGBT group. Then, The Washington Post found the smoking gun: a 1993 speech Miers made before a women’s group, in which she said, “Abortion clinic protesters have become synonymous with terrorists, and the courts have been the refuge for the besieged.” America long ago “gave up … legislating morality.” When it comes to abortion cases, “the more I think about these issues, the more self-determination makes sense.” Miers’s words convinced the leader of an abortion industry pressure group that she was one of their own. “If you take what she said at face value, you would conclude that she recognizes the right of a woman to choose an abortion as a matter of self-determination,” said Kate Michelman, then-president of the NARAL Pro-Choice America.

That speech encapsulated every disquieting thought evangelicals harbored about her. “Our concern with Miers was that she didn’t need to evolve; she was already there,” said Perkins. As the evidence trickled out, even many of her former supporters changed their minds. Her candidacy ended just one day later.

“Fortunately, President Bush felt the heat — I don’t know if he saw the light, but he felt the heat,” said Bauer, who had questioned Bush’s commitment to judicial appointees during the 2000 primaries. Miers officially withdrew her own candidacy, sparing everyone the embarrassment of having Bush withdraw her or losing a Senate confirmation vote.

Samuel Alito’s interactions with senators could hardly have differed more. “Justice Alito was brilliant and had all that experience,” said Coats. “I sat through all these interviews,” and “even the people who opposed him … were just celebrating what a brilliant career he’s had and how articulate he was.” He sailed to confirmation. Bush’s “second attempt at the nomination ended up being Samuel Alito, the author of the decision to overturn Roe v. Wade,” said Bauer.

From Despair to Dobbs

Samuel Alito’s ascension to the court taught evangelical Christians that uncompromising, principled engagement with GOP leaders pays off. “The Left never guesses where their nominees stand, and so it was time for us to quit having to guess,” said Perkins. Evangelical Christians, who made up 26% of the electorate in 2016 and represent the margin of victory in many swing states, began to demand power proportional to their influence.

During private meetings with then-candidate Donald Trump in 2016, pro-life leaders laid down “some clear markers,” including putting “good, strong constitutionalists on the court,” Perkins remembered. Trump took the unprecedented move of promising to name Supreme Court justices from a public list of originalist judges.

A vacancy soon opened with the death of Justice Antonin Scalia on February 13, 2016. Senate Majority Leader Mitch McConnell (R-Ky.) refused to bring Barack Obama’s nominee, now-Attorney General Merrick Garland, up for a vote, saying voters should settle the matter in that year’s presidential election. The move brought McConnell, a dedicated supporter of judicial reform, heat from inside and outside his own party. Some Republicans counseled him to confirm Garland quickly since Garland, who was widely touted as a “moderate,” was the best deal he would get; if Hillary Clinton won the presidency, as the bipartisan Beltway intelligentsia assumed, she would appoint a fire-breathing liberal. McConnell stood his ground until Trump’s jolting victory eight months later. In the end, Trump kept his campaign promise to select every justice from his list — and all three voted to overturn Roe v. Wade. “For the final victory, Donald Trump (and Mitch McConnell) deserve immense credit. They were the indispensable men of the Dobbs decision,” Buchanan told me.

Ultimately, principled opposition had prevailed in the Grand Old Party. “We would not be here had pro-life conservatives not stood up to the typical Republican establishment and said, ‘We’re not doing this anymore,’” said Perkins. “We now have a majority on the court that understands the Constitution.” Decisions rendered during this Supreme Court’s term show greater fidelity to the Constitution than any time since 1935, according to legal adviser and expert Ken Klukowski.

As the Dobbs decision begins the process of ending the abomination of abortion, it closes a vicious historical loop. In 1988, Democrats replaced Robert Bork, an originalist judge who would have voted pro-life, with the slippery jurisprudence of Anthony Kennedy. Seventeen years later, conservatives reversed the process by substituting Alito for Miers. Seventeen years after the Miers showdown, Alito wrote the decision overturning Roe v. Wade.

Pro-life leaders should never forget the power of standing on principle. Samuel Alito, like King David, may have been a second choice, but he accomplished greater things for the Lord than those selected before him — and conservatives, constitutionalists, and generations of unborn children are reaping the benefits.