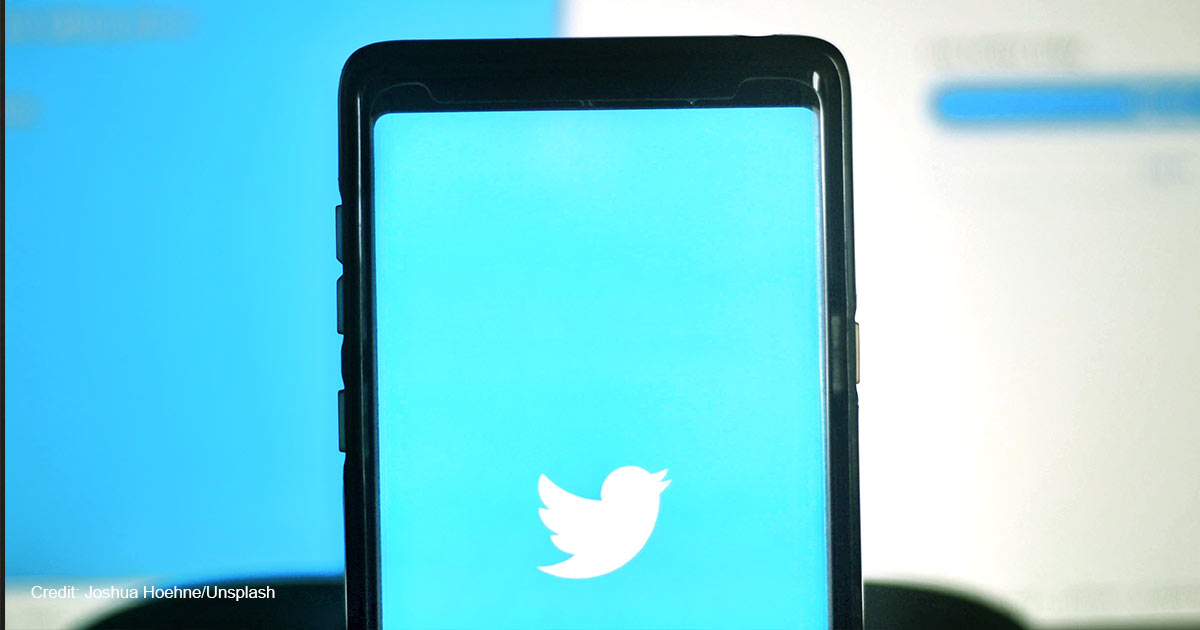 Twitter kept secret blacklists of conservatives, according to new information published as part of “The Twitter Files,” confirming longstanding conservative complaints. The detail and organization of Twitter’s blacklist system went far beyond what anyone had imagined, with individualized blacklist profiles for a wide array of public voices, specifying whether the figure was on the “Trends Blacklist,” “Search Blacklist,” or on the “Do Not Amplify” list, among others.

New owner Elon Musk has gradually publicized the social media giant’s misdeeds as he has uncovered them, granting credible but canceled reporters exclusive access to publish the findings on Twitter. The latest discoveries were published by liberal reporter Bari Weiss, founder and editor of The Free Press, and a former New York Times editor who was pushed out after the paper renounced its publication of an op-ed by Senator Tom Cotton (R-Ark.). (She had complained, “Twitter is not on the masthead of The New York Times. But Twitter has become its ultimate editor.” Yet two years later, while the now-freelance Weiss was getting a huge exclusive scoop on the social media site her coworkers had used to cancel her, they were picketing their own employer.)

“A new #TwitterFiles investigation reveals that teams of Twitter employees build blacklists, prevent disfavored tweets from trending, and actively limit the visibility of entire accounts or even trending topics — all in secret, without informing users,” wrote Weiss. 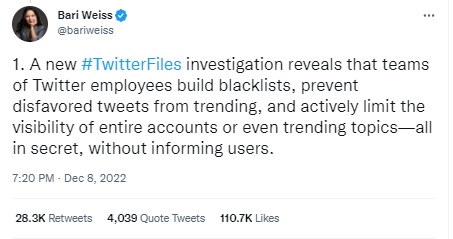 Among the secretly censored accounts was that of Dr. Jay Bhattacharya, a professor at the Stanford School of Medicine, “who argued that Covid lockdowns would harm children,” Weiss summarized. “Twitter secretly placed him on a ‘Trends Blacklist,’ which prevented his tweets from trending.” To reinforce the illusion that expert consensus supported the lockdown policies, Twitter had to deliberately suppress dissenting experts, like this respected professor with 240,000 followers, who appeared often on “Washington Watch” to get his message out. Two years later, history has incontrovertibly vindicated him. 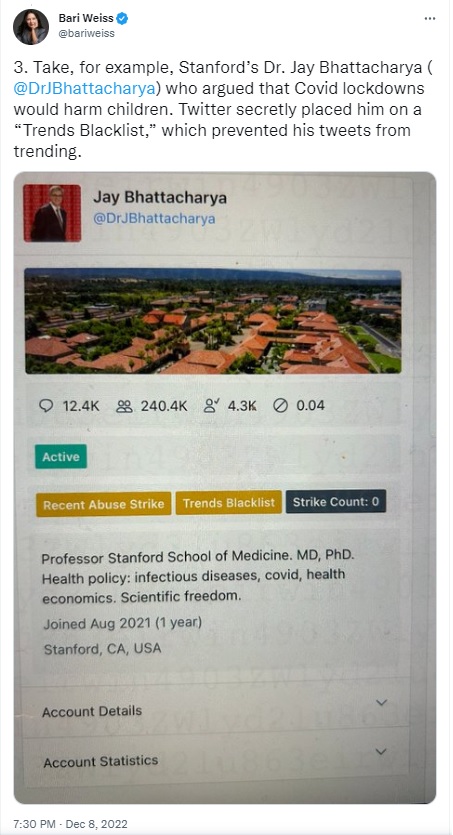 Twitter moderators had a wide variety of tools to hide conservative opinions from users. A popular talk-show host made it onto the “Search Blacklist,” while another conservative activist made the “Do Not Amplify” list. 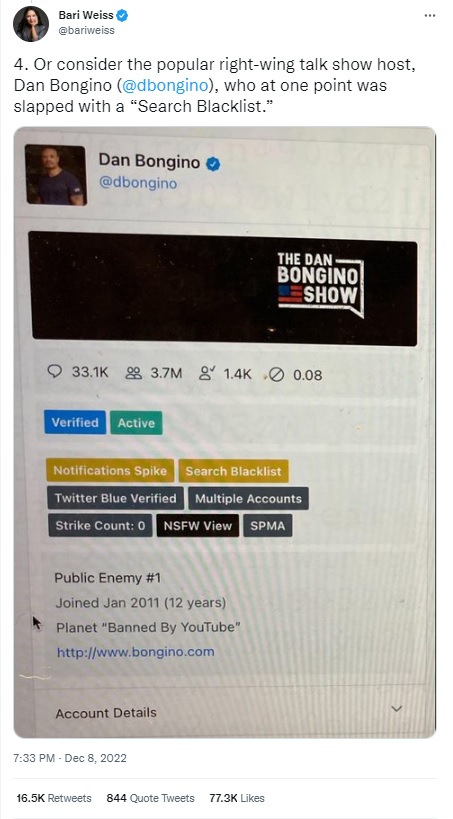 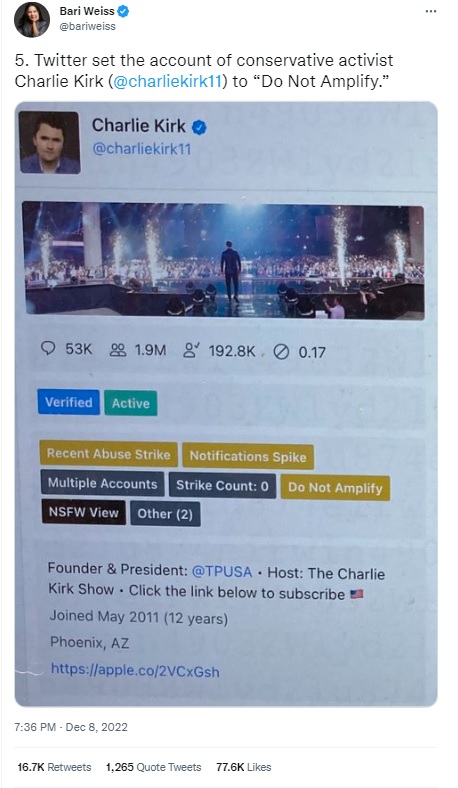 “Twitter denied that it does such things,” Weiss continued. “In 2018, Twitter’s Vijaya Gadde (then Head of Legal Policy and Trust) and Kayvon Beykpour (Head of Product) said: ‘We do not shadow ban.’ They added: ‘And we certainly don’t shadow ban based on political viewpoints or ideology.’” She explained, “What many people call ‘shadow banning,’ Twitter executives and employees call ‘Visibility Filtering’ or ‘VF.’ Multiple high-level sources confirmed its meaning.” Changing its name doesn’t make it right. “Think about visibility filtering as being a way for us to suppress what people see to different levels. It’s a very powerful tool,” one senior employee told Weiss.

Especially high-profile accounts, including Libs of TikTok, got their own, special attention. Explained Weiss, “But there existed a level beyond official ticketing, beyond the rank-and-file moderators following the company’s policy on paper. That is the ‘Site Integrity Policy, Policy Escalation Support,’ known as ‘SIP-PES.’” She added, “This secret group included Head of Legal, Policy, and Trust (Vijaya Gadde), the Global Head of Trust & Safety (Yoel Roth), subsequent CEOs Jack Dorsey and Parag Agrawal, and others.” Gadde, Roth, and Agrawal were all fired when Musk took over.

For these particularly sensitive cases, Twitter operated with special secrecy. “This is where the biggest, most politically sensitive decisions got made. ‘Think high follower account, controversial,’ another Twitter employee told us. For these ‘there would be no ticket or anything,’” Weiss wrote. That’s a convenient way of covering up politically motivated censorship. Even if, say, Congress, wanted to investigate, there would be no paper trail. Weiss added, “One of the accounts that rose to this level of scrutiny was @libsoftiktok — an account that was on the ‘Trends Blacklist’ and was designated as ‘Do Not Take Action on User Without Consulting With SIP-PES.’” 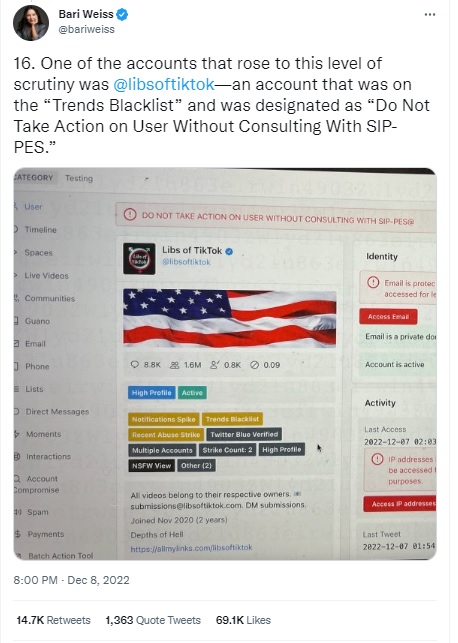 Weiss also uncovered that Twitter’s special animosity towards Libs of TikTok (LTT) was groundless. An internal SIP-PES memo from October 2022 recommended an eighth suspension for LTT, even though they admitted “LTT has not directly engaged in behavior violative of the Hateful Conduct policy.”

Weiss emphasized that Twitter performed shadow-banning — or “visibility filtering,” as they preferred to call it — “all without users’ knowledge.”

Now conservatives know what they had long suspected. “Imagine how many views conservatives would have if we weren’t on blacklist,” said one investigative reporter. Another conservative media figure asked whether reporters would “release the full list of people who were affected” — although such a list may be so extensive that it takes weeks to compile.

The Twitter Files also caught the attention of Congress. “The 2nd batch of Twitter files are explosive & seem to prove its execs lied to Congress when they testified the platform did not ‘shadow ban’ conservatives,” wrote Rep. Mike Johnson (R-La.). “Other big tech platforms, too? [Our] House Judiciary Comm[ittee] will get the answers in the new Congress!” If convicted of lying to Congress, Twitter officials could serve jail time. 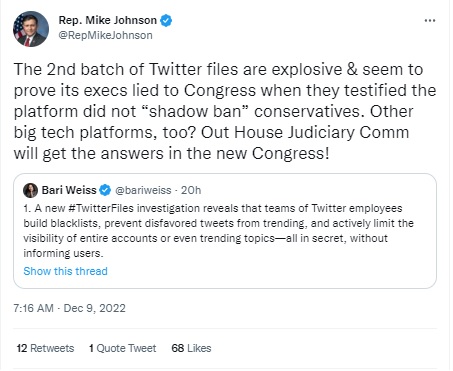 Rep. Pat Fallon (R-Texas) agreed, “I look forward to hearing Twitter’s testimony before @GOPoversight. They owe the American people answers.” Republican representatives clearly plan to call for testimony on the shadowbanning in the next Congress.

If it is proven that Twitter officials lied about shadowbanning disfavored political views, it won’t be the only deception they were willing to commit. Twitter whistleblower Peiter Zatko, the social media company’s former head of security, told lawmakers in January that Twitter “chose to mislead” regarding its security flaws.