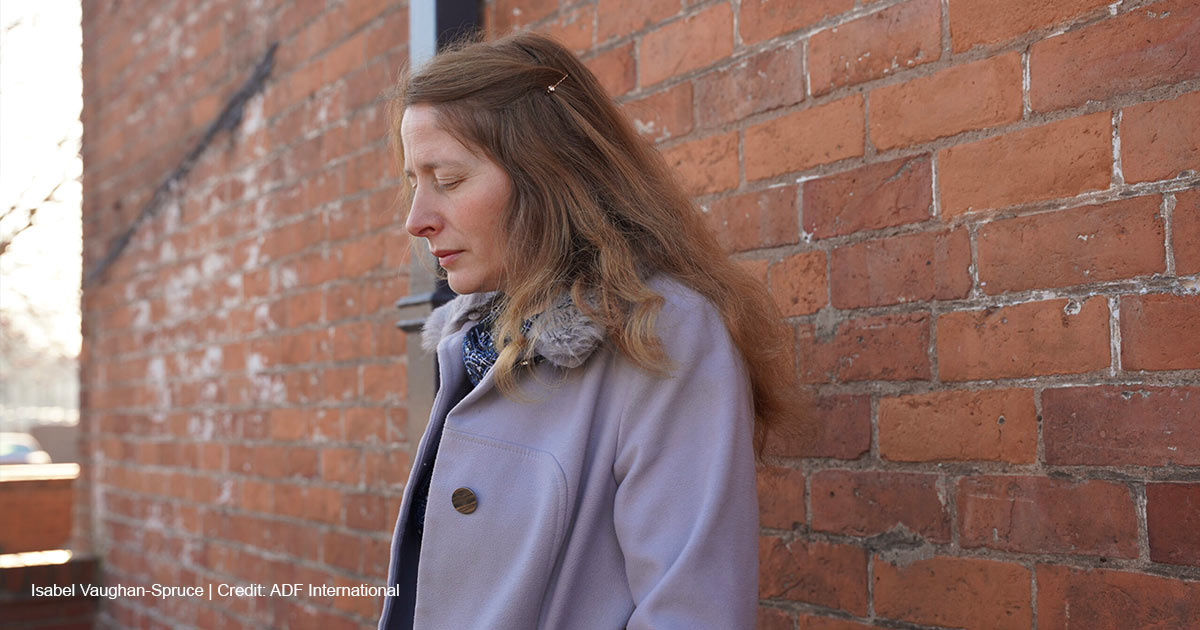 Just before Christmas, a stunning video showing the arrest of one U.K. citizen who was silently praying near an abortion facility in Birmingham, England went viral on social media.

Isabel Vaughan-Spruce is a committed Christian, and for years she has made it a habit to pray for the protection of innocent human life in the womb as she walked past, or stood outside, abortion facilities. In November, police received a complaint about Vaughan-Spruce and arrived on the scene to question her. Though Vaughan-Spruce and the police officers involved were calm and respectful, the video of their conversation depicts a chilling violation of free speech and religious freedom.

A police officer asks Vaughan-Spruce, who is standing quietly on the sidewalk, “What are you here for today?”

Police officer: “Okay. Why here of all places? I know you don’t live nearby.”

Vaughan-Spruce: “This is an abortion center.”

Police officer: “Is you standing here part of a protest?”

Vaughan-Spruce: “No, I’m not protesting.”

Police officer: “Are you praying?”

Vaughan-Spruce: “I might be praying in my head, but not out loud.”

It is after this admission — the admission that she was silently praying in her head — that Vaughan-Spruce was asked to go to the police station for questioning. When she declined, she was arrested.

Birmingham’s PSPO expressly prohibits various free speech activities within a certain restricted area around the abortion facility, including peaceful assembly and giving women information on alternatives to abortion. Among the activities prohibited are, “Protesting, namely engaging in any act of approval or disapproval or attempted act of approval or disapproval, with respect to issues related to abortion services, by any means. This includes but is not limited to graphic, verbal or written means, prayer or counselling …”

This measure, like others implemented or being considered as legislation across the U.K., is a grotesque violation of basic rights that we expect to be protected in any Western country. Free speech on public sidewalks, including prayer, should have no geographical restrictions. The purported purpose of these measures is to prevent harassment for women seeking abortions. Of course, harassment is always wrong and should be illegal, but of course harassment already is illegal in the U.K. Make no mistake, the goal here is not to end harassment — it is to marginalize (in this case literally) any speech or religious belief that might disapprove of abortion or offer hurting women an alternative to abortion.

ADF International, a religious freedom legal advocacy group, is representing Vaughan-Spruce. ADF’s Lois McLatchie told Nigel Farage on GB News that, “whether this PSPO itself is lawful under international human rights law which protects freedom of religion, freedom of thought, conscience, and belief, and freedom of speech, is another really important question in this case.” It is disturbing that the insistence of some U.K. politicians on making sure women do not see or hear the thoughts or prayers of pro-lifers and Christians is leading them to potentially violate international human rights law.

Pro-abortion activists have claimed that it is not Vaughan-Spruce’s silent prayer that provoked her arrest, but rather her violation of the PSPO. Yet, merely standing in the PSPO area is allowed. It was specifically the act of prayer that was not allowed under the PSPO, and that resulted in Vaughan-Spruce’s arrest. This is without question a religious freedom case.

At its core, religious freedom encompasses the ability to hold and live out your faith. That naturally includes praying in public — especially when your public prayer is done in the privacy of your own head. Free countries must diligently avoid the business of punishing Orwellian thoughtcrimes. After her arrest, Vaughan-Spruce stated, “Nobody should be criminalised for thinking and for praying, in a public space in the U.K.” Quite right.