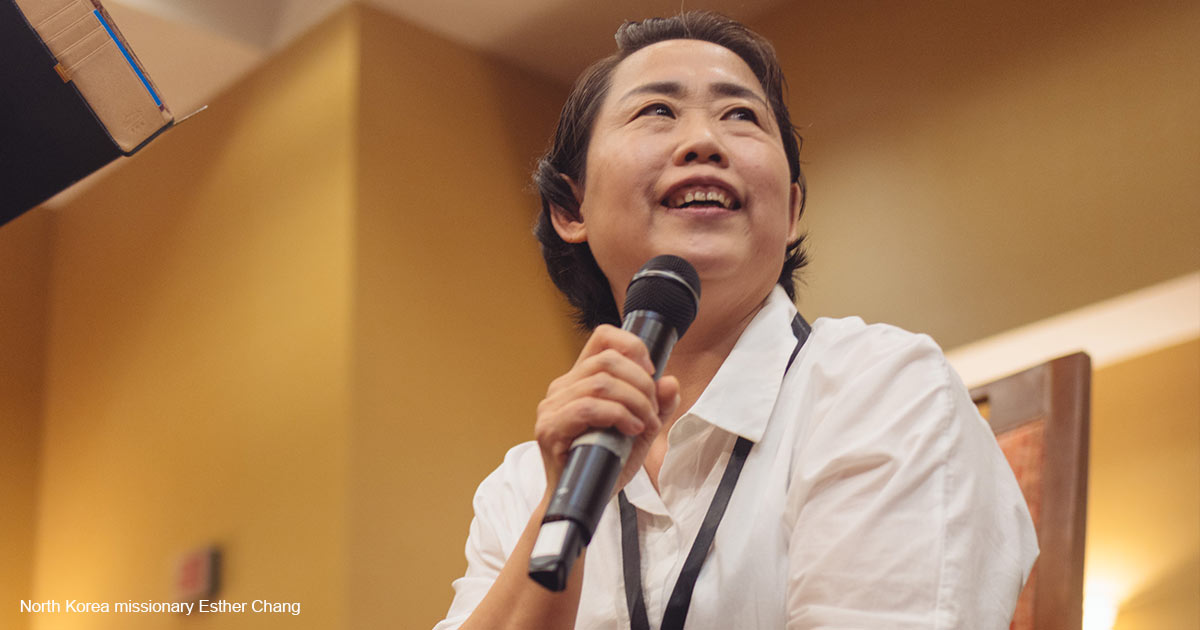 Voices of the Persecuted Church (Part 2): Christianity in North Korea

Read part one on the Chinese underground church.

North Korea is a land wrecked by totalitarianism. The country has been at the top of the Open Doors World Watch List for the past 20 years as the government actively targets Christians. Korea once offered a thriving Christian community before the Korean War in the early 1950s, but there is now only an estimated 2% of Christians in the country.

Why does the country hate Christianity and religion generally? Freedom of religion means freedom of conscience and freedom from an oppressive, outside force like the North Korean government which operates an atheist, socialist state that promotes Juche, the socio-political ideology of Kim Il-sung, the country’s founder. It functions like a mandated religion that deifies the Kim family, and the government uses this as a tool to indoctrinate and control its citizens. North Korea’s regime has sought to replace Jesus as Lord and Savior with the Kim family as the lords and saviors.

North Korea’s constitution describes Kim Il-sung and Kim Jong-il as “saviors of the nation” who “created a history of miracles” with “their noble benevolent politics” and “immortal exploits” to “turn the whole society into a large family which is united in one mind.” The “great leaders” with their “great ideas” and “great achievements” have been enshrined in the Kumsusan Palace of the Sun, Kim Il-sung’s massive residence that was converted to a mausoleum in 1994, where they “are preserved in their lifetime appearance [with] a grand monument to their immortality and a symbol of the dignity and eternal sanctuary of the entire Korean nation.”

The media acts as an extension of the government’s schemes and also promotes cultish behavior. In 2007, the state media reported a story of a man named Kang Hyong-kwon escaping a flood holding his daughter in one hand and portraits of King Il-sung and Kim Jong-il in the other. Due to the power of the current, he lost the grip of his daughter who drowned in the flood, but he managed to hold onto the sacred portraits. The media praised Hyong-kwon for his bravery and urged others to imitate him.

In addition to teaching Kim family worship, the government slanders Christians. According to Korea Future Initiative’s report “Persecuting Faith,” many children hear the fable of an American missionary hunting down a child who stole an apple and using acid to brand the word “thief” into the child’s forehead.

According to the country’s constitution, the government guarantees the free exercise of religion that is contingent upon loyalty to the state. Or in other words, there is no guarantee of the free exercise of religion. Kim Il-sung, as part of classic Marxist thought, taught that religion is a “reactionary and unscientific view of the world” used by the ruling class to exploit and oppress the masses. Il-sung’s regime is dedicated to the eradication of all religion, particularly Christianity because of its association with Western civilization.

North Korea has state religious organizations like the Roman Catholic Jangchung Cathedral, but this acts as a smokescreen to deceive the outside world. North Korea’s songbun system divides its citizens into classes based on loyalty to the state, and religious believers are regarded as enemies of the state and “counter-revolutionaries” deserving discrimination, punishment, or execution. As one North Korean defector put it, “In North Korea, you can get away with murder if you have good connections. However, if you get caught carrying a Bible, there is no way to save your life.”

The “Ten Principles for Establishing a Monolithic Leadership System,” a document outlining the teachings and political theory of the Kim family, is the government’s playbook. The reigning party in North Korea, the Workers’ Party of Korea (WPK), uses the 10 principles to determine what is socially and politically acceptable.

Back to Jerusalem’s Voices of the Persecuted Church Conference hosted one North Korea missionary named Esther Chang. After the team introduced her, a small Asian woman walked on the stage, grabbed the microphone, and asked if she could begin her story by praying and calling on the name of the Lord three times. With great power, she exclaimed at the top of her lungs, “Oh, Lord Jesus!” and began praying for God’s Spirit to speak through her.

Chang grew up in a rural Chinese village on the North Korean border, and her grandfather, the only Christian in her family, served as a doctor to the poor community of Korean-Chinese citizens and North Korean refugees. She was not a Christian growing up. In fact, she resented her grandfather’s faith and resolved to never follow Christ. After being pronounced dead by doctors as a young child, Chang came back to life after her grandfather prayed for a miracle. Even this wasn’t enough to open her heart to Christ. Her classmates mocked her in school for her family’s Christian identity, and she left her village to pursue a career in the big city of Shenyang in the 1980s at the age of 19.

Through God’s sovereign arrangement, she stayed with an older relative, a devout Christian whom Chang called grandmother. At that time religious persecution began to decline (although religious gatherings were still monitored by the government) when Deng Xiaoping replaced Chairman Mao Zedong in the late 1970s, and church buildings finally reopened.

After many failed attempts, Chang’s grandmother persuaded her to go to church. Walking into an old steeple for the first time in her life softened Chang’s heart to Christianity. She found a Korean Bible and began to devour the Scriptures.

Eventually she was invited to an underground church meeting. After attending her first meeting, she gave her life to serve God and His people. The life she tried to escape now became her pursuit.

Chang’s ministry brought many to the underground church, but seeing their lives destroyed because of their faith tortured her. This burden became too much to bear, so she found a job in Saipan, a small island over 2,000 miles from Shenyang with beautiful mountains, religious freedom, and economic opportunity. Reflecting on this, she clearly saw the story of Jonah being played out in her life.

Saipan was a season of spiritual growth. She knew no one there, and outside of work she spent her time praying and studying the Bible. She found a church and began taking seminary courses, and after several years there, she came back to her home in China, married a Christian man, and returned to the underground church. She simply wanted to settle down, raise her family, and live a normal life — but God had other plans.

Meanwhile, North Korea’s struggling economy suffered from the Soviet Union’s collapse in the late 1980s, and North Korean refugees flooded China, particularly in the region where Chang lived. The more time she spent with these refugees, the more she felt a calling to North Korea. But she couldn’t stand the country or the people. She resented the thought of leaving her life of stability in China to go into a hopeless country filled with persecution, famine, and godless people.

So, she left her home and went right back to Saipan to work in a factory for several years. She continued to wrestle with God. After having a dream of sharing the gospel in North Korea, she rushed home to China and prepared for whatever the Lord had for her.

She began receiving North Korean refugees into her home to clean, feed, and clothe them. Many brought lice-infested hair, fungus-stricken skin, and severe diseases with them because of the treacherous journey across the border.

At first most of the refugees were women and children, and nearly all of them embraced the gospel and joined the local churches in China. However, as more male refugees flooded the country, the situation became more dangerous.

In one terrifying episode, a fellow refugee Chang had been serving grabbed her six-year-old son, stuck a knife to his throat, and demanded all her money. She complied, and that same day, a group of refugees betrayed her to the authorities, falsely accusing her of abuse. This was one of multiple dangerous encounters, but God preserved her through the flames of trial and tribulation.

One day Chang met a North Korean refugee with the same surname. The refugee legally identified Chang as a family member so that she could enter the country without heavy restrictions. North Korea encouraged this practice; foreigners typically brought outside gifts into the country which benefited an otherwise impoverished nation. This was her ticket into the motherland.

Her first trip to North Korea shattered her understanding of reality. The people lived in extreme poverty, and their homes were dark, empty, and dirty. Except, of course, for the Kim family portraits. The government required every home to present these in pristine condition.

Unspeakable and horrifying conditions were normal. Dead corpses in town squares were common, and the bodies seemed as lifeless and emotionless as the people living there. Border authorities were cold and shamelessly demanded bribes after stealing her belongings. She witnessed local authorities arresting a man accused of kidnapping a child and cooking her body parts for food.

In an act of God’s providence, multiple outside investors hired Chang as a consultant to run businesses in the country, and the government granted her a special visa with minimal restrictions for operating in the country. She built a reputation as a mysterious yet beloved ally among the people and the government as she passed out supplies and food from China to the locals during her visits.

Her contributions to North Korea’s society attracted attention from some of the government’s leaders, and they invited her to a dinner at the Chinese Consulate to recognize her achievements.

On her way to the event, she faced her greatest test of faith yet. The officials stopped at a giant, beautiful statue of Kim Il-sung arrayed with freshly trimmed bonsai trees and bright lights that illuminated the grandeur of the masterpiece, and they were going to bow down to pay their respects.

At first, she was filled with terror thinking about what might happen if she refused. But suddenly, God filled her with a spirit of righteous indignation. A mile down from the statue were corpses, starving peasants, and homes without electricity, all the while the government spent millions on building and preserving an idolatrous statue of its dead leader.

Her time came. In a classic Shadrach, Meshach, and Abednego moment, her group approached the memorial, stood up straight, and bowed down multiple times before the idol while Chang remained standing. The rest of the group finished their ritual and began marching off, and when a few around her asked why she didn’t bow down, she said that doing something for your leaders means much more than bowing before a mute statue. The officials never questioned her refusal to bow again.

A Land of Revival

Through Chang and many other believers, God has established dozens of underground churches in North Korea. They’ve smuggled Bibles, established secret fellowship meetings, and mimicked the practices of the early church. They gather in homes for prayer, Bible study, meals, and coordination, they give money and food to the poor, and they admonish each other to trust in God’s provision for their needs. The sick are healed, the hungry are fed, and the lost saved.

Chang was clear: North Korea is not a land of hopeless suffering. It is a land filled with the blood of martyrs that God has used to water the seeds of revival. Chang said that like the dry bones of Israel in Ezekiel, God is bringing resurrection life to the nation of North Korea.

To learn more about Chang’s story, check out her book “Smuggling Light.”