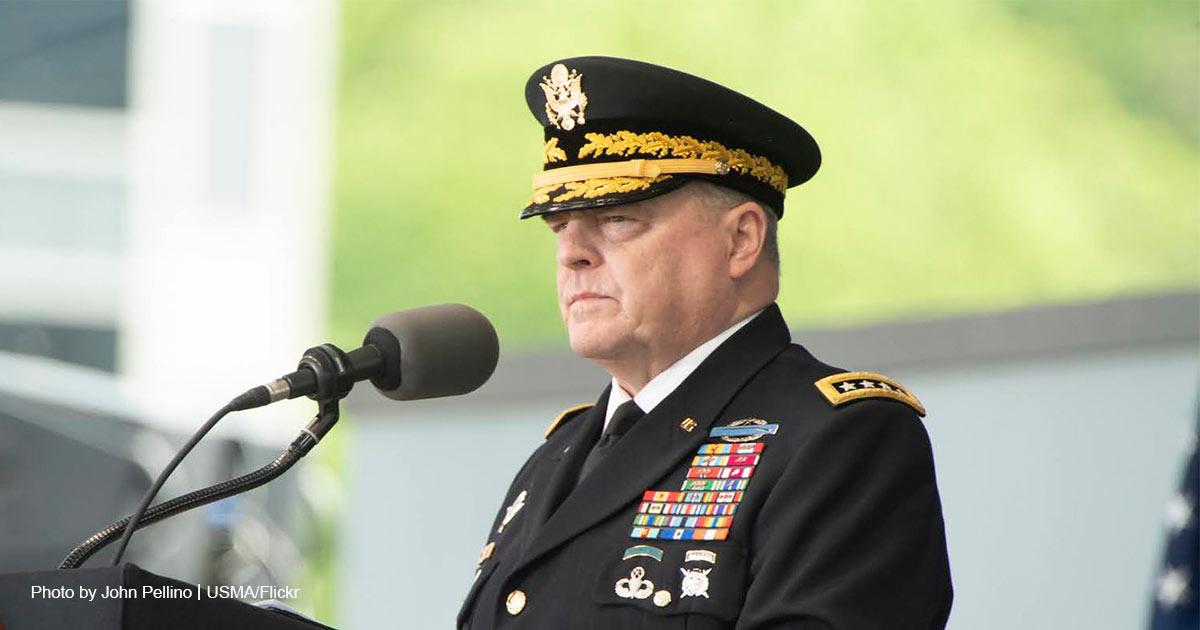 General Mark Milley misled Congress, under oath, about the way firing hundreds of thousands of soldiers who refuse to comply with the Biden administration’s vaccination mandate will harm America’s national security, a Republican congressman revealed Tuesday.

The Biden administration has required all service members to receive both doses of the vaccine by July 1 or face disciplinary measures up to and including discharge. It has largely closed its ears to those requesting a religious exemption from the jab. The Department of Defense classifies 266,532 service members as only partially vaccinated, not counting 50,710 civilians and an unknown number of enlisted men who refused to take a single dose of the COVID-19 vaccine.

“I challenged him on this recently” during a congressional committee hearing. “He said, ‘It’s all going to be okay. It’s only a small number of our troops’ — which is just a bald-faced lie,” insisted Jim Banks (R-Ind.) on “Washington Watch with Tony Perkins.”

If Biden maintains his strident stance, he will expel “a significant group” of enlistees, Banks said. The National Guard reports 40,000 unvaccinated reservists, and the Army Reserve reports 22,000 — more than a tenth of each force’s total enrollment.

At least 12,000 members of the U.S. Air Force enjoy temporary protection from adverse events, thanks to a nationwide restraining order issued by U.S. District Court Judge Matthew McFarland, a Trump appointee. But the order expires on July 28.

Purging the service of its unvaccinated members reflects “a political motive” that comes from “the very top and from the president,” Banks stated. “They know that, by and large, the vast majority of men and women who serve in the military lean to the Right. And those 260,000 soldiers, sailors, airmen, and Marines who did not take the vaccine are probably far more conservative.”

Recruits have “a total disconnect with this administration, because they have so highly politicized this vaccination. We’ve never had a vaccine [that] has been politicized as much as this one has.”

The potential mass firings come as the military has failed to meet recruiting goals for the year. The Army met a mere 40% of its recruitment goal by late June, as the combined armed forces face the worst recruiting deficit since the Vietnam War. Yet Milley, the chairman of the Joint Chiefs of Staff, has focused much of his efforts on promoting LGBTQ niche issues and critical race theory inside the military. (Milley, who is fully vaccinated, announced he tested positive for COVID-19 in January.)

“The Biden DOD is poised to fire 240,000 servicemembers right after the Army was forced to downsize because of low recruitment,” Banks tweeted Monday (when estimates were lower). “Leftism is a national security risk.”

Paring down conventional forces even further will erode America’s national security. “The U.S. military today is not positioned” to fight a two-front war, wrote Heritage Foundation scholars James DiPane and Octavian Miller earlier this year. “It is too small and too old to fight on numerous fronts.” The mass discharges will also carry unknown, but not insignificant, economic consequences. The Army spent at least $11 million to dismiss just 173 unvaccinated trainees, according to The Military Times. Milley’s blithe statements account for none of these realities.

“When we get the gavel back and Republicans are in the majority again, I hope we fix this and fix it very quickly, and welcome these men and women back into the military,” said Banks, who chairs the conservative Republican Study Committee.

Falsehood marks every aspect of the Biden administration, as Banks poked holes in White House efforts to redefine the meaning of the word “recession.” Traditionally, a recession has meant two quarters (six months) of economic contraction, known as “negative economic growth.” The U.S. is expected to meet that metric when the government releases official figures on Thursday — and some economists say our economy already qualifies as a recession. “It’s a soft recession, but the economy is not doing well,” former Trump adviser Stephen Moore told Perkins earlier this month.

The Biden administration contends that “it is unlikely that the decline in GDP in the first quarter of this year — even if followed by another GDP decline in the second quarter — indicates a recession.” The president and his spokespeople have repeatedly described the recession-era economy as a great “transition” to a Green economy.

Yet worldwide economic data from the International Monetary Fund immediately undercut Biden’s PR blitz. “The world may soon be teetering on the edge of a global recession, only two years after the last one,” announced the IMF’s chief economist, Pierre-Olivier Gourinchas, Tuesday.

“You can’t message your way out of this economic picture,” Banks told Perkins.

Both attempts to pull the wool over Americans’ eyes hold profound consequences for the safety, security, and prosperity of the United States. Still, even in this environment, the truth sometimes dribbles through the cracks of the Biden administration’s stonewalling.

During a trip to Jakarta on Sunday, Milley admitted, “The Chinese military, in the air and at sea, have become significantly more and noticeably more aggressive” in recent years.

“The world is less safe here because of the policies of this administration,” concluded Banks.

Clarification: The original version of this story stated that COVID-19 vaccines received only an emergency use authorization. This is true of the Janssen and Novavax COVID-19 vaccines, while the FDA has authorized the Pfizer and Moderna vaccines. We regret any confusion.