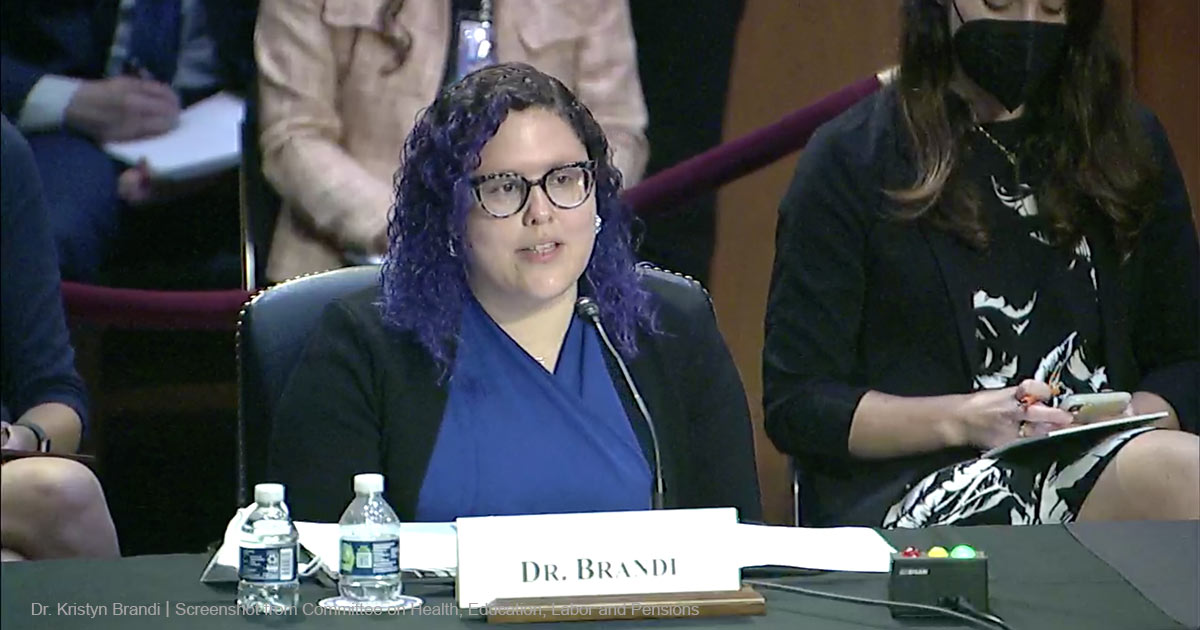 A video of a self-described “pro-abortion doctor” telling the U.S. Senate “abortion is liberation … and I want to celebrate that” went viral on Wednesday. But the Democrats’ star witness proved equally untrustworthy when she asserted a new wave of post-Roe, pro-life protections might threaten the care women receive when suffering from threatening ectopic pregnancies. In reality, she has personally advocated for policies that could — and have — killed women suffering from such life-threatening complications.

Kristyn Brandi, the chair of Physicians for Reproductive Health, began her testimony by saying, “I use she/her pronouns” and “identify as a bisexual woman and proud member of the LGBTQ+ community.” Her written testimony used the word “folx,” a gender-neutral neologism similar to “Latinx,” twice.

“I am a pro-abortion doctor. I say pro-abortion not to be antagonistic, but to point out all of the good that abortion can provide for people,” Brandi continued. “Abortion is liberation for some. There is a lot of good that comes from people’s ability to access abortion, and I want to celebrate that.”

The comments brought swift rebuff. “Women’s rights are not built upon the dehumanization and blood of our children,” said Students for Life Action. Her “liberation” language mirrored terminology used by the radical Left; for instance, a chapter of the Democratic Socialists of America held a fundraiser for the “Abortion Liberation Fund of Pennsylvania.”

But in her less provocative moments, Brandi repeated a dishonest tactic increasingly used by supporters of abortion: equating abortion-on-demand with care for ectopic pregnancies and miscarriages.

“Abortion can be necessary to save someone’s life,” she said, telling a story about a mother about to die due to a ruptured ectopic pregnancy. In most ectopic pregnancies, the newly conceived child implants in the fallopian tubes instead of the uterus; it is always fatal for the child and can prove deadly to the mother if not caught early enough. “We have heard people question whether bans on abortion will impact care like ectopic pregnancy management … or if miscarriage management will be allowed.”

This much is true: We have heard people raise such baseless questions. Rep. Alexandria Ocasio-Cortez (D-N.Y.) justified protests against Justice Brett Kavanaugh even after an assassination attempt by claiming he decided “half the country should risk death if they have an ectopic pregnancy.” Democratic leaders in both chambers of Missouri’s statehouse called Monday for a special session to allow treatment of ectopic pregnancies, although the existing pro-life law already allows abortion in “cases of medical emergency.” CBS News reporter Li Cohen wrote that “people will die” after Dobbs, because “ectopic pregnancies” will “threaten lives without abortion care.”

“So that’s their scare tactic: They’re trying to scare women,” Senator Roger Marshall (R-Kans.) told “Washington Watch with Tony Perkins” on Wednesday. “Every trigger law out there that maintains protection for the life of the mother.”

For instance, a Louisiana law — which was signed by Democratic Governor John Bel Edwards and which White House spokesperson Karine Jean-Pierre called “radical” and “extreme” — explicitly states it “is not an abortion” to “[r]emove an ectopic pregnancy.” Texas, Oklahoma, and other states have similar provisions. “The state laws that restrict abortion allow treatment of ectopic pregnancy,” agreed Dr. Ingrid Skop of the Charlotte Lozier Institute on “Washington Watch.”

“I've never performed an abortion,” said Marshall, an OB/GYN who delivered more than 5,000 babies. “But I’ve taken care of hundreds of women with ectopic pregnancies and hundreds more with miscarriages.” The senator, who clashed with Brandi during Wednesday’s Senate hearings, stated, “In our residency training, we were taught, ‘Don’t let the sun set on an ectopic pregnancy.’”

None of the medical procedures doctors use to end an ectopic pregnancy is classified as an abortion. Nor do state pro-life laws prohibit doctors from dealing with miscarriages — in which the child has already died of natural causes — or from saving the life of the mother.

“The mother is the first patient,” explained Perkins. “You’re trying to help the mother. And, if in the process the baby expires, that’s not an abortion.”

While pro-life laws do not threaten women with ectopic pregnancies, permissive abortion policies favored by the abortion industry in general — and Brandi in particular — do.

The abortionists’ preferred regimen of prescribing abortion-inducing drugs via telemedicine has already caused women to die from undetected ectopic pregnancies, said Skop. “It is impossible to know, without doing an ultrasound, whether a woman has a pregnancy in her fallopian tubes, so giving these chemical abortion pills without supervision means that women will have ectopic pregnancies undiagnosed. The medical abortion does not work on an ectopic pregnancy, and those can rupture. And women have died undergoing abortion when the ectopic [implantation] was not diagnosed.”

The fact that a doctor must personally examine a woman to confirm an ectopic pregnancy is hardly a right-wing talking point. The nation’s largest abortion business, Planned Parenthood, admits, “Getting checked out by a doctor is the only way to know for sure if you have an ectopic pregnancy.”

Yet Brandi has repeatedly claimed ultrasounds are medically unnecessary before any abortion, including one that is chemically induced. Brandi praised the Biden administration’s FDA when it announced on April 12 it would “exercise enforcement discretion … with respect to the in-person dispensing requirement of” mifepristone, one of two drugs used in a chemical abortion. “Medication abortion care is safe to administer via telehealth,” Brandi asserted, lamenting that “many states still have bans on telehealth” chemical abortions. Brandi has repeatedly praised telemedicine abortions and those who carry them out.

Brandi’s organization has a financial stake in the issue. Physicians for Reproductive Health, Brandi’s group, revealed in April that more than one in five of its members who provide telemedicine abortion “provide the entire visit via telehealth,” with no in-person check-up. And Planned Parenthood sued the state of Ohio last year over a law requiring a physical examination before carrying out a chemical abortion. “Requiring that a patient see a physician in person to obtain the medication for a medication abortion does not improve patient safety, no matter what might be said by legislators who ignore science,” said Planned Parenthood CEO Alexis McGill Johnson.

Her statement was released on April Fool’s Day.

Legislative efforts to save babies and mothers from predatory abortionists have more profound ramifications for the pro-life movement, the senator declared. “This is a spiritual battle for the soul of the nation right now,” Marshall told Perkins. “God’s going to give us a chance.”