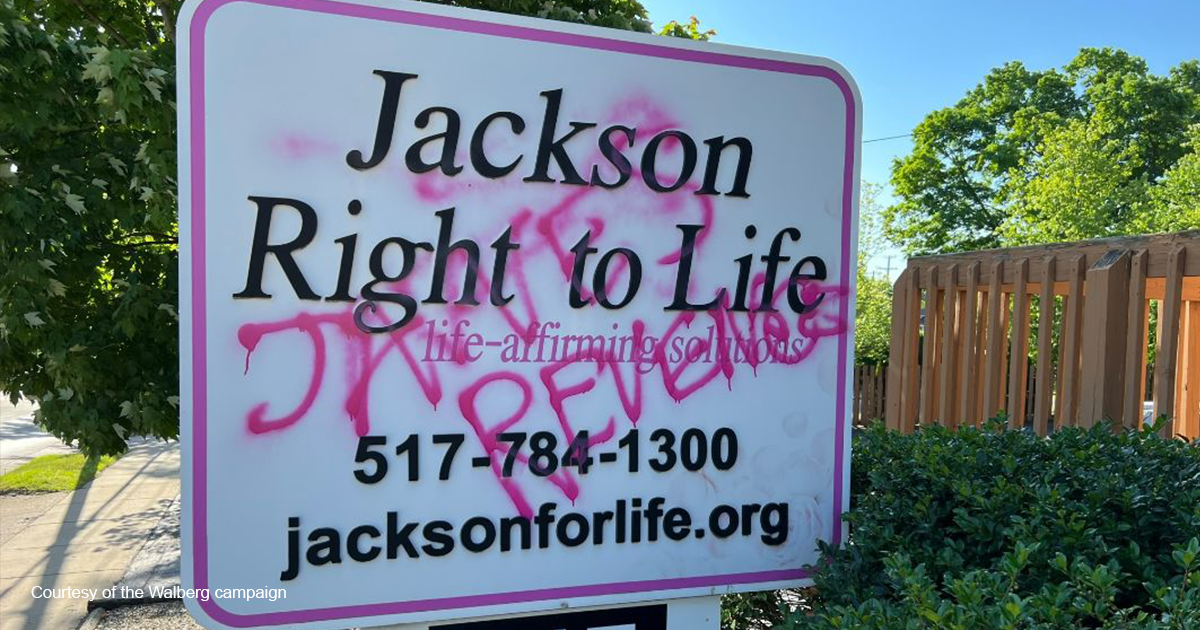 In a seemingly unprecedented escalation of the ongoing violence against churches and pregnancy centers, abortion activists have attacked the offices of a pro-life U.S. congressman.

On Tuesday night, vandals targeted the campaign office of Rep. Tim Walberg (R-Mich.) in Jackson, Michigan — smashing numerous windows, hammering through a “Tim Walberg for Congress” bumper sticker on the door, and leaving a spray-painted message identifying themselves as the abortion extremist group Jane’s Revenge.

“My office and Jackson [Right to Life] were the latest to fall victim to the disgusting domestic terrorism targeting pregnancy centers and pro-life groups across the country,” said the congressman.

The overnight attack marks the first time someone has caused property damage to the office of a member of Congress since the leak of the Supreme Court’s Dobbs decision on May 2. However, two men attempted to commit arson at the office of Washington State Rep. Andy Barkis, a pro-life Republican, on June 13. Someone also left a harassing chalk message outside the home of Senator Susan Collins (R-Maine), a Republican who supports abortion and voted against banning a partial birth abortion ban, on May 10.

The latest actions also damaged Jackson Right to Life, which shares its offices with the Walberg campaign, as well as “a random person who lives nearby,” according to Michigan Right to Life. Jackson Right to Life spokesperson Kathy Potts said the victims “don’t hate” the perpetrators and are praying for them but felt it’s “a sad state of affairs that groups like Jane’s Revenge are resorting to … domestic terrorism and hate crimes” over policy disagreements.

Abortion activists seem to have ratcheted up the intensity of their attacks as the Supreme Court draws closer to overturning Roe v. Wade. Last week, Jane’s Revenge vowed to take “increasingly drastic measures” which “may not come in the form of something so easily cleaned up as fire and graffiti.”

The wrecking of Walberg’s office is the 63rd assault against pro-life targets, according to a list compiled by the Family Research Council — including 15 attacks on churches, 31 on pro-life pregnancy resource centers, and 17 directed against individuals or groups of people. It came days after Jane’s Revenge vandalized two other pro-life facilities approximately an hour’s drive from Jackson.

“Despite this intimidation, I will continue to fight for our principles and will stand strongly against the culture of violence and death,” vowed Walberg in a statement emailed to The Washington Stand on Wednesday.

“It is shameful that President Biden and Speaker [of the House Nancy] Pelosi (D-Calif.) have both refused to condemn these intimidation tactics from radical pro-abortion activists,” continued Walberg, an ordained pastor who once worked for Moody Bible Institute, earned a 96% score from FRC Action’s Scorecard, as well as a perfect voting record from National Right to Life and a 98% score this session from Heritage Action for America. “This wave of violence across the country against pro-life organizations and individuals has got to stop.”

Others also highlighted the indifference and incendiary rhetoric of abortion supporters during this crime wave. “Meanwhile, Governor Whitmer continues telling her supporters to ‘fight like hell,’” noted Michigan Right to Life. “And still not a word from Biden,” noted SBA Pro-Life America, as it shared photos of the latest crime scene on social media.

Some Democratic officials have gone so far as to claim that pro-life advocates are the real danger. New York Governor Kathy Hochul (D) bestowed $35 million on abortionists, including $10 million to increase security at the state’s abortion facilities.

“They have no threats. They’re not the ones whose facilities are burning,” said Jim Harden, CEO of CompassCare, whose Buffalo office was firebombed. “We need equal protection for pro-life people and organizations,” he insisted on Wednesday’s episode of “Washington Watch with Tony Perkins.” But conservative legal experts view the odds of that happening with pessimism.

Biden administration officials won’t even assure “the protection of high-level government officials, so obviously, they’re not tripping over themselves to protect ordinary people,” Andy McCarthy, a former federal prosecutor, told Perkins later in the program. When Americans no longer believe that the courts produce even-handed justice for everyone, he warned, “then they’re going to reject the system … and then you lose everything that allows us to have an orderly, flourishing society.” Referring to the Book of Judges, Perkins said, “Our whole republic teeters when we get to this point where basically everybody does what’s right in their own eyes.”

“I quite agree,” said McCarthy. “We are teetering on the brink of losing something that’s so fundamental.”

In spite of the uneven scales of justice, and acts of physical intimidation, pro-life advocates say they will not back down from supporting society’s most vulnerable. “I hold the sanctity of life in the highest regard and will continue to work diligently and support legislation that protects the rights of the unborn,” the congressman noted. “Knowing the people at Jackson Right to Life, this will only strengthen their determination to protect the unborn.” Harden also promised to continue to stand for life.

“We’re not going to stop. This is God’s call on our lives,” said Harden. “Our job is to fear God and nothing else.”