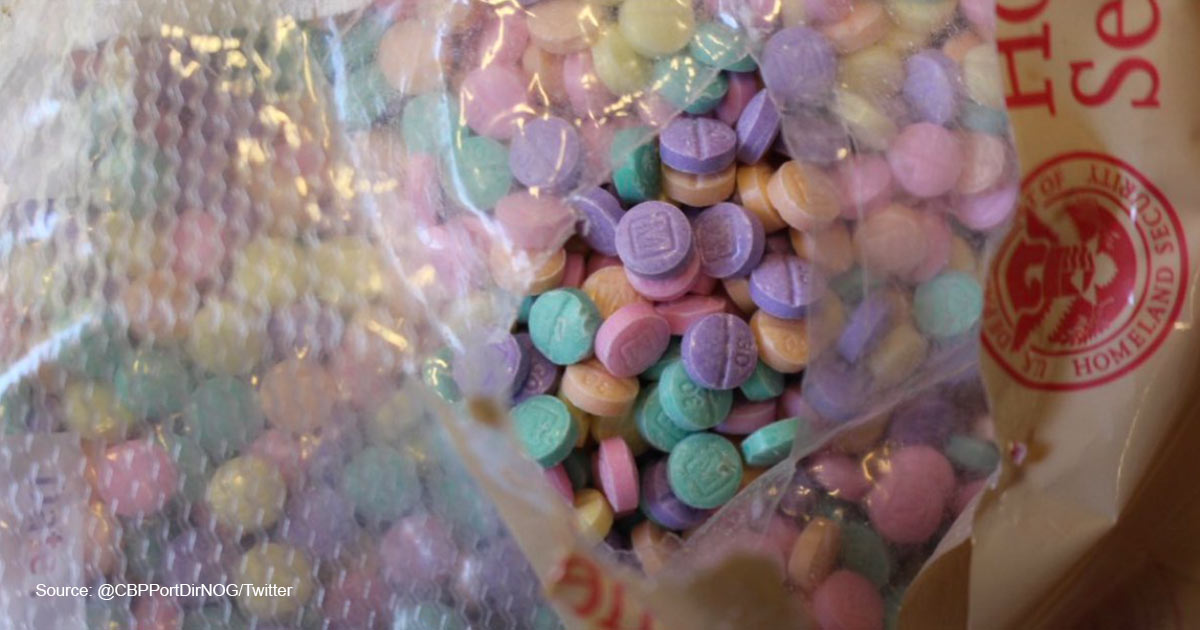 There’s no way to sugarcoat the facts — recent drug seizures at the southern border reveal dangerous narcotics that appear to be targeting children with their deceptively candy-like appearance. Last week in Arizona, border patrol agents intercepted 250,000 “rainbow fentanyl” pills busted from a vehicle on Tuesday, and 15,000 of the lethal multicolor pills strapped to a person’s leg last Wednesday.

This disturbing drug trafficking coincides closely with National Fentanyl Prevention and Awareness Day on Sunday, August 21. What was initially introduced as a painkiller by pharmaceutical companies in the nineties has increasingly spiraled into a rampant epidemic, declared a public health crisis in 2017 under the Trump administration. Fentanyl is a highly addictive narcotic with 50-100 times the potency of morphine. As a synthetic opioid, it is often cut with other drugs, meaning users may not be aware that they are ingesting the lethal substance. A lethal dose of fentanyl is only two miligrams.

Every day, approximately 115 American lives are claimed by fentanyl overdose. The Department of Health and Human Services reports sobering statistics on the harm this drug has affected on Americans in the past few years. According to the Drug Enforcement Administration’s official press release, “Fentanyl is the single deadliest drug threat our nation has ever encountered. … From large cities to rural America, no community is safe from the presence of fentanyl.”

Family Research Council’s Connor Semelsberger says that attempts from Congress to decriminalize marijuana and other drugs work directly against keeping young people away from drugs. “Candy-looking fentanyl pills are just the latest example of a dangerous trend to promote high potency drugs to children,” he told The Washington Stand. “This comes directly out of the playbook of Big Marijuana which has spent tons of money advertising high potency marijuana products like gummy bears to children, all while lobbying Congress to allow further drug legalization in the U.S. This is now one more thing that parents need to be extra diligent to ensure their children are not unknowingly exposed to high potency illicit drugs.”

This candy-like fentanyl seizure comes on the heels of record-high amounts of the drug seized at the border this past July — a 203% increase from the previous month. The opioid crisis has worsened as synthetic drugs and narcotics flood over the border from Mexico. As the war on drugs wages and the Biden administration provides funding to crack down on youth drug overdosing and abuse, critics of their handling of the border believe that they are exacerbating, rather than helping, the drug problem in America. With this year’s attempt to overturn Trump-era Title 42 and this month’s successful overturn of Trump-era Mexico City Policy, record numbers of migrants and drug trafficking has been flooding the border.

“The open border policies of this administration betray the American people, especially children who are targeted by candy like drugs,” FRC’s Meg Kilgannon told TWS.

With youth drug dealing, abuse, and overdoses on the rise, parents are right to be wary. “Parents are always concerned about the dangers of drug addiction and the availability of drugs in the communities and even schools,” Kilgannon continued. “The movement to legalize drugs makes this challenge even greater. And with fentanyl, the danger is deadly.”

Many resources exist to help concered parents seeking to protect and prevent their children from getting involved with harmful drugs. On high alert for youth drug abuse, the DEA put out an emoji drug decoder for parents to understand the popular emoji codes that young people are using to buy and sell drugs, among other resources.

Beyond federal attempts to combat the opioid crisis, nonprofit organizations such as Adult & Teen Challenge USA help those who are struggling with addiction get well through their recovery programs. President and CEO Gary Blackard offers his advice to parents, having seen the world of drug addiction up close through his Christian nonprofit. He told TWS, “Nothing replaces engagement with your children including educating them on the dangers facing them today. If parents don’t educate their kids, others will and most of the time that ends very wrong.”

“Most parents understand the negative effects of drugs and that kids explore them. I don’t know if parents really understand the targeting that is happening,” Blackard told TWS. “Dealers are specifically targeting children these days with ‘fun’ pills and drugs that are made to look harmless.”

For Christians, the topic of drug trafficking, dealing, abuse, and addiction runs deeper than open borders, drug legalization, or fentanyl awareness. Blackard says believers ought to do away with the stigma around addiction, as it is indicitave of a deeper root cause. “Every believer has struggled with a form of addiction — also known as idols in the Bible — in their life. While we may be discussing drugs and alcohol, there are many other forms of addiction just as damaging. Porn, gambling, technology, and internet gaming are all strong types of addictions. Shopping, sports, money and other elements of life can be addictive.”

Despite knowing the grave dangers of addiction, Blackard holds firm that there is hope for those who find themselves involved with drugs. “At Adult & Teen Challenge, we see lives transformed daily,” he told TWS. “Over 10,000 people enter our doors every year in North America … those who stay in our programs see their lives restored. This is done through spiritual formation (biblical teaching, prayer, and chapel services), counseling sessions (one-on-one and group sessions), education (GED, Diploma and college courses), and developing work skills. We have thousands of testimonies of those who are living strong, sober lives.”

“This is why Jesus came. He transforms lives. We need to be the hands and feet of Jesus to those who are hurting, who are struggling in life. We need to pray, love, feed, encourage, and pray some more for these people. Engaging those in addiction is not easy. There will be frustration, pain and hurt. But we are all called to be ‘Good Samaritans’ to those deeply hurting.”