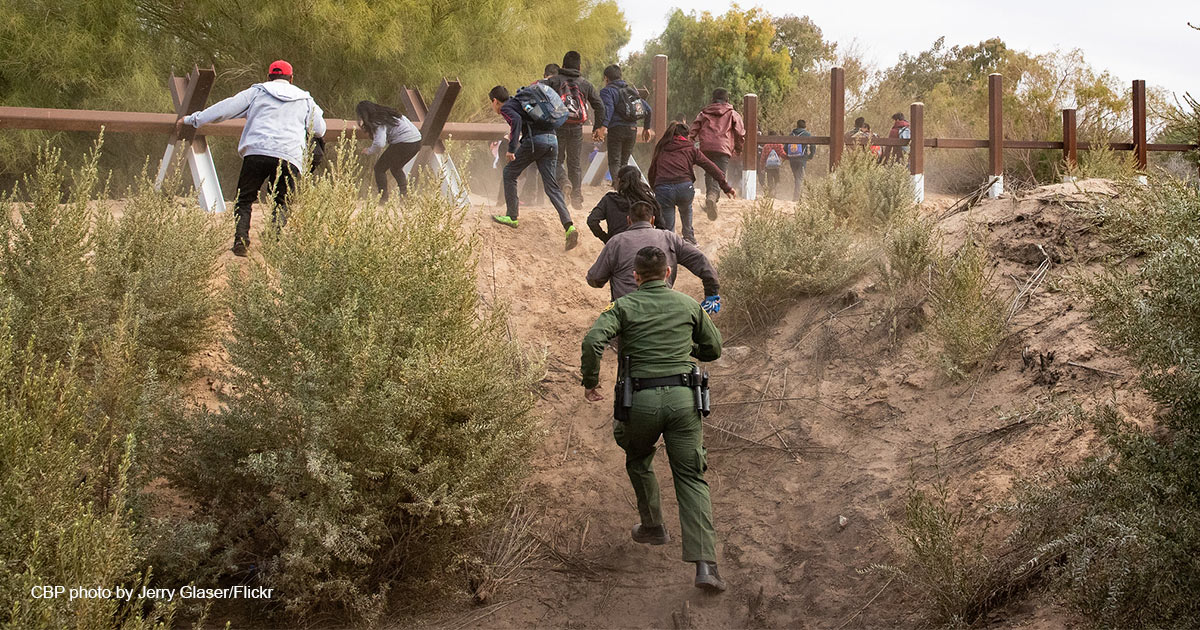 The Biden administration has set another national record on illegal immigration: For the first time in U.S. history, more than two million illegal border crossings took place in one year at the southern border, according to new government statistics released Monday afternoon.

Border Patrol agents experienced 203,597 illegal border encounters in August, U.S. Customs and Border Protection (CBP) reported on September 19 — bringing the total number of illegal border crossings this fiscal year to a record-breaking 2,150,639. Although there is another month before the fiscal year comes to a close, that number already exceeds the previous record of 1,734,686 illegal encounters set by the Biden administration last year.

“President Biden created the executive orders that made for an open border, and Latin America is simply responding to these policies,” Rep. Andrew Clyde (R-Ga.) told “Washington Watch” guest host Joseph Backholm on Monday. Biden rescinded President Donald Trump’s Remain in Mexico protocols, did away with Title 42, and at times during his administration reduced the number of deportations by as much as 90% over pre-pandemic levels. In 2019, candidate Biden said Americans “have an obligation” to provide “free” health care for illegal immigrants, provoking would-be border crossers to arrive wearing Biden t-shirts.

The latest statistics belie Vice President Kamala Harris’s contention that “the border is secure.” The number of illegal border crossings more than tripled this August compared to August 2019 (62,707), when the United States enjoyed broad-based economic prosperity and a 1.7% inflation rate. The Border Patrol has arrested more illegal immigrants in less than two years of the Biden administration than in the eight years of the Obama-Biden administration, according to the Washington Examiner (3.48 million under Biden vs. 3.38 million under the Obama administration).

Despite surging levels of illegal immigration cresting across the southern border, much of the U.S. debate centers not around how to stop the flow but about which part of the country will feed and shelter them. Democratic mayors have cried foul as Republican governors transported small numbers of illegal immigrants to such sanctuary cities as Chicago, San Francisco, and Washington, D.C. New York City Mayor Eric Adams (D) told CBS2 that his “legal team is looking at legal challenges we could do with Texas.”

Adams tried to blame the uncontrolled border crisis, which coincides almost perfectly with Biden’s presidency, on the Republican governors. “This is an American crisis that we need to face — the humanitarian crisis that were [sic] made by human hands, by some of the governors in our southern states,” Adams told “ABC This Week” on Sunday.

“It is a crisis, and it’s a manufactured crisis because of Biden’s failed policies,” retorted Florida Governor Ron DeSantis (R) before a capacity crowd in Kansas on Sunday. It is certainly a costly undertaking. Texas Lt. Governor Dan Patrick (R) revealed late last week that the Lone Star State spends $400 million a year on border security.

Adams said Republican governors DeSantis, Texas Governor Greg Abbott (R), and Arizona Governor Doug Ducey (R) used the caravans as “their way of covering up what many people have been really concerned about, the erosions of basic human rights,” specifically the Republicans’ support of the right to life and the Second Amendment.

DeSantis made news late last week, when he chartered two flights containing approximately 50 illegal immigrants to Martha’s Vineyard. “Don’t send 50; send 500, because they need to [feel] the pain that the border states are feeling,” Clyde told Backholm, “because it’s the policies of the Left that have created this crisis and disaster.”

The same day, Abbott sent two busloads of illegals to the Naval Observatory, where Vice President Kamala Harris lives. “I think that they should be commended, because if a city is going to declare themselves a sanctuary city, then I think that they’ve just said to the entire country: ‘We are a magnet; send the illegals here. We’re a sanctuary city. We’ll take care of them,’” said Clyde, who sits on the House Homeland Security Committee. “I think it’s a great idea,” because the tactic effectively drew attention to the plight of border towns experiencing an influx of up to 2,000 illegal immigrants a day, he said.

Abbott attempted to bring Mayor Adams and D.C. Mayor Muriel Bowser (D) toward a political solution that would span the nation’s partisan divide. “I also ask you to join me in requesting President Biden secure the border and put an end to this disastrous crisis,” Abbot wrote in an August 1 letter.

Some Democrats have voiced concerns about the unsecured border, and the problems that flow from it: the nation’s fentanyl epidemic, human trafficking, transnational narcotrafficking gangs, potential terrorist infiltration, and lower American wages. “We can all agree that the situation of the illegal immigrants is a painful one, and that we should keep them in our constant prayer. Nevertheless, we must also acknowledge the plight of the American citizens due to these open borders and the influx of illegal crossings,” said former New York City councilman Rev. Ruben Diaz, a pro-life, pro-marriage Democrat. “I ask you to join me in prayer. We must unite and pray for God to Bless America and protect us from the treacherous path it is on.”

Clyde held out little hope that Democrats currently in office will reach across the aisle to stop the flow of illegal immigrants across the Rio Grande, because the Left hopes to weaponize the issue. “I think they have a nefarious end here, and that is that they want to increase the population of the blue states that are losing population,” Clyde stated.

The U.S. Census essentially rewards sanctuary cities and states with more votes than states that represent U.S. citizens. Federal law apportions federal funds, and how many congressional seats a state has, based on its population; however, the Census counts America’s non-citizen population, which researchers at Yale University have estimated as high as 22 million. President Trump attempted to add a question asking about the citizenship status of respondents to the 2020 Census, but the Supreme Court ruled against him.

Once the illegal immigrants are safely ensconced in the United States, Democrats “want to turn them into voters. They want to give them amnesty, and they believe that they’ll vote for Democrats,” said Clyde. Texas Attorney General Ken Paxton (R) agreed, telling Family Research Council President Tony Perkins in July that Democrats “had this plan before they were elected, to get as many people here to vote as possible. They want to give them amnesty.” Left-wing activists have long fantasized granting mass amnesty to a U.S. illegal immigrant population the size of Florida, creating a far-Left “governing coalition for the long term.”