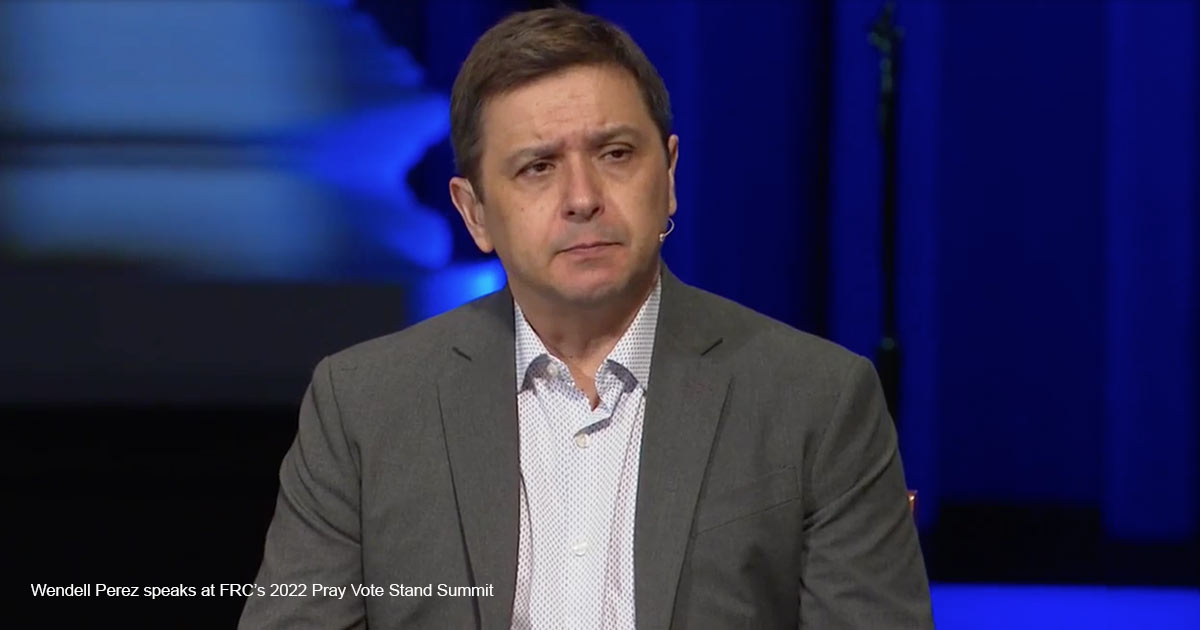 At the beginning of this year, Wendell Perez got a call that no father ever wants to receive — his elementary-aged daughter had attempted to hang herself in the school bathroom. Perez and his wife rushed to the school, where their daughter was whisked away by a police car to stay in a mental institution for a week. Searching for answers, the couple found out from school administrators that their “son” had been struggling with “his” gender identity. On top of that, the school had remained quiet about the issue as the student was concerned that “he” would not be accepted at home because of the family’s faith.

It was only until the child’s second suicide attempt in a matter of two days that Perez and his wife were informed of the situation. The school was secretly transitioning the young girl into a male identity, without the parents’ knowledge or consent.

At the recent Pray Vote Stand Summit in Atlanta, Georgia, Family Research Council’s Meg Kilgannon hosted a panel on Perez’s story, featuring the Florida father himself and his lawyer, Vernadette Broyles of the Child and Parental Rights Campaign (CPRC). With difficulty and a quivering voice, Perez shared his experience. “I’m going to be honest with you,” he told the room. “My blood still boils up to this day.”

From the outside, the Perezes are a normal family — a devout Catholic home with two parents and a 12-year-old in the Clay County school system. According to Perez, there was “no indication at home” that the girl was “questioning her biological sex.” He cites the religious discrimination of the school as a reason that the parents were kept in the dark. “Our faith was used against us. They decided [for us] that our faith — because we have a Christian faith — that was not safe for our daughter.”

“After that, we had to pick up the pieces and start a very painful healing process as a family,” Perez continued. “And part of that process was that we file a lawsuit against them for the violation of our parental rights and other constitutional rights. And that lawsuit is still active in federal court.”

CPRC’s Broyles is representing them in their lawsuit, despite Clay County School District dismissing the allegations and requesting that the judge drop the case. She maintains that both the United States and Florida constitutions protect parents’ rights. According to Broyles, Perez’s case is one of many instances of schools breaching parental rights and transgender ideology being forced upon children. Many parents across the country have found themselves as plaintiffs fighting school administrations that have helped their children begin quietly transitioning, such as a mother in California and a couple in Tallahassee, Florida, with similar situations. Other instances across the country have included the emergence of “gender transition closets” in communities and schools.

Kilgannon, who is senior fellow for Education Studies at FRC, commented to The Washington Stand, “It takes special grace to be able to function beyond a crisis in your family. The Perez family’s faith blesses us all by their example and by their lawsuit, which will protect other families from activist school policies. We need to pray for them, for our schools, and all other families struggling through a gender crisis.”

While the Biden administration attempts to redefine Title IX to include sexual orientation and gender identity, several elected officials are siding with parents through bold advocacy and legislation. This past week, Governor Glenn Youngkin (R) of Virginia released the state’s 2022 model guidelines upholding a parent’s right to their child’s education above all else. Virginia’s Loudoun County has notably made headlines with sexual orientation indoctrination scandals and school boards usurping parents’ agendas. Additionally, Florida’s Governor Ron DeSantis (R) has made friends among many parents and enemies among other citizens with his Parental Rights in Education bill.

“This is a spiritual battle that knows no geographic bounds … it’s coming everywhere,” Kilgannon told TWS. She maintains that if something like this can happen to the Perez family, no one is safe from transgender ideology targeting their kids.

As the power struggle persists across the country between parents and their local school boards, Perez is using his voice to speak out on behalf of parents who have daughters like his own. “As a parent, I am so grateful to Wendell and his family for taking legal action,” Kilgannon concluded. “This happened in Florida, after the Parental Rights Law went into effect. Wendell is a practicing attorney, who is active in his church. His family practices their faith. So if this can happen to Wendell’s daughter, it can happen to anyone.”