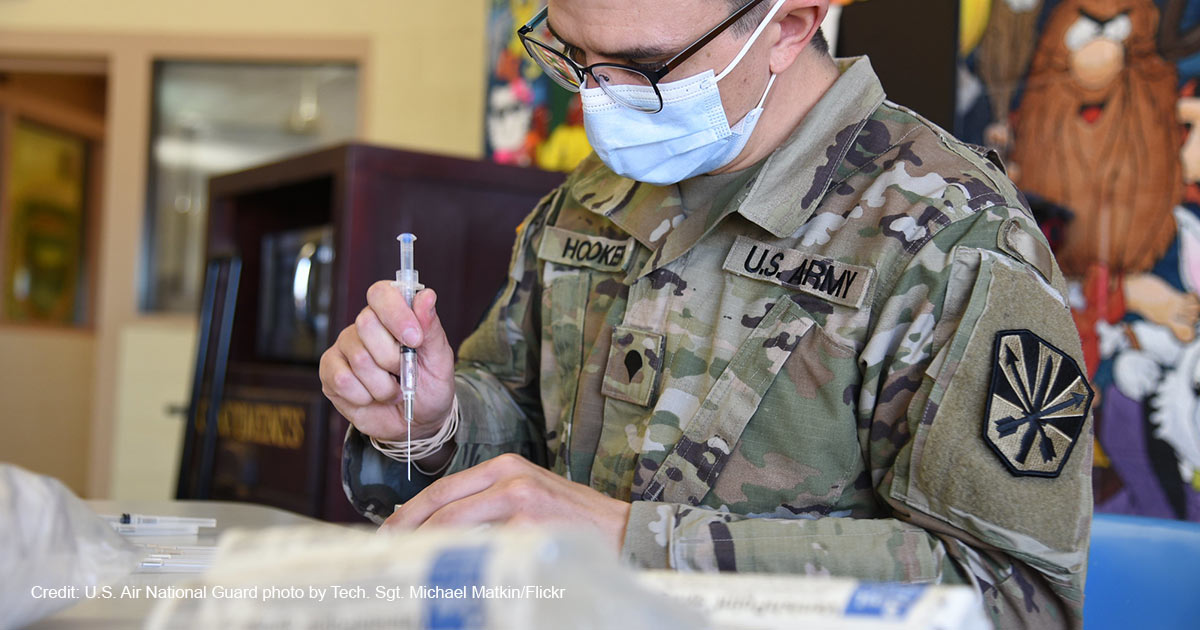 Although President Joe Biden declared that “the pandemic is over” last Sunday on “60 Minutes,” the Biden administration seems to hold the vaccination mandate more sacred than religious liberty — and America’s national security is paying the price. The Biden administration’s near-total refusal to grant exemptions for servicemembers with religious objections to the COVID-19 vaccine reflects pervasive “error if not outright fraud,” and has caused a recruitment crisis that imperils U.S. military readiness, a congressman said on Monday.

Even as the military faces its greatest enlistment crisis in decades, tens of thousands of Christian servicemembers face expulsion for refusing to take the COVID-19 shot. The largest branch of the services, the U.S. Army, announced it met only 52% of its recruitment goal this fiscal year, which ends Friday. “The Department anticipates we will collectively miss our recruiting mission despite accessing more than 170,000 remarkable young men and women,” the deputy assistant secretary of defense for military personnel policy, Stephanie Miller, testified before a Senate subcommittee last Wednesday. That leaves the Army with 466,400 soldiers on active duty — 10,000 soldiers shy of its reduced goal, a gap that will creep to 21,000 by next September.

“The reason is very simple,” said Rep. Michael Johnson (R-La.) earlier in the program. “It’s the vaccine mandate. They have eliminated, out of the gate, about 40% of the prospective recruits” among the target demographic of 18- to 25-year-old males. “That very demographic is the one that is least at risk from COVID, even at the height of the pandemic.”

In addition to flagging enrollment, up to “100,000 of our soldiers and military service persons are subject to being discharged from the military right now” for refusing to receive the coronavirus jab, explained Johnson — including a number of elite Navy SEALs. “Do you know how much money it takes to train and equip a Navy SEAL? You can’t put out a help wanted sign and just recruit new ones overnight,” he said. “This is serious business, and it’s putting our nation in jeopardy.”

“The whole system itself seems to be fraught with error, if not outright fraud,” Rep. Johnson declared.

The Coast Guard lawsuit — brought by three Christian Coast Guard members who object to receiving the vaccination, because all FDA-approved COVID-19 vaccines have been made with or tested on aborted fetal cells — argues that the Biden administration policy violates the Religious Freedom Restoration Act and the free exercise clause of the First Amendment.

Even if the administration does not respect religious liberty, its decision makes no sense according to its “ambitious, whole-of-government equity agenda,” declared Biden on his first day in office. “There are five minorities and two Caucasian women that we have thrown out of the service when all of the services are repeatedly beating the diversity drum as hard as they can,” Vice Admiral (Ret.) William “Dean” Lee, the former commander of Coast Guard operations on the Atlantic coast, told Perkins on Monday. “It’s hypocrisy. If you really mean what you say about diversity, equity, and inclusion, treat these people like you mean it.”

The Coast Guard Academy feted one of the three lead plaintiffs, Lt. Jg. Alaric Stone, as its 2020 distinguished honor graduate, and his supervising officer described Stone as an “Exemplary Officer [who] embodies critical leadership skills.” Now, Stone said, “I find myself in a situation where I am being forced to choose between my faith and service to my country; it is truly heartbreaking.”

Johnson has consistently opposed efforts to punish military servicemembers with a faith-based objection to receiving the vaccination. He and Sen. Mike Lee (R-Utah) led 51 lawmakers in a letter calling on Secretary of the Army Christine E. Womuth to rescind a policy prohibiting unvaccinated members — including those with religious exemptions — from traveling off-base without receiving the express permission of Under Secretary Gabe Camarillo. The policy limits their career advancement, they stated. He and Rep. Thomas Massie (R-Ky.) penned a letter signed by a total of 41 lawmakers asking Secretary of Defense Lloyd Austin to reconsider the role vaccine mandates had in the current recruitment crisis.

“In a Republican-led Congress … this is going to be a top priority of ours,” Johnson promised. “We must do it to keep the country safe. This is not a game. We should not be playing politics with the military.”

Perkins concluded by telling his listeners, “I would encourage you to contact your members of Congress about this. This is a national security issue.”

Clarification: The original version of this story stated that COVID-19 vaccines received only an emergency use authorization. This is true of the Janssen and Novavax COVID-19 vaccines, while the FDA has authorized the Pfizer and Moderna vaccines. We regret any confusion.