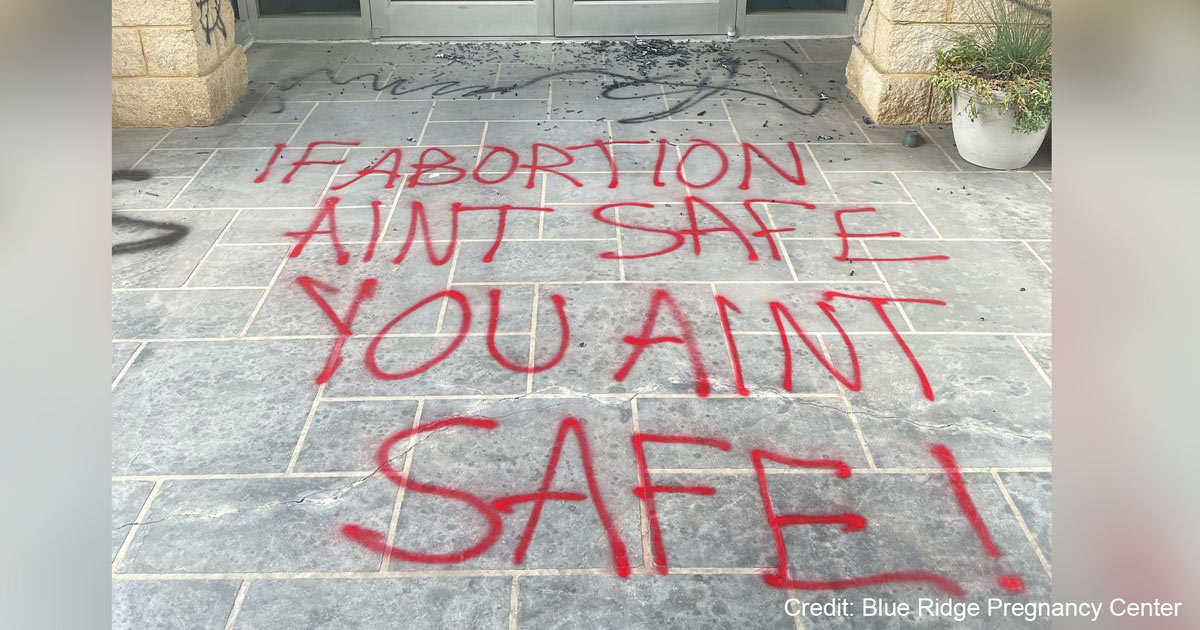 During a caustic speech in Washington’s crime-ridden Union Station Wednesday night, President Joe Biden declared all people of goodwill “must unite to make it absolutely clear that violence and intimidation have no place in America.” He could begin by protecting pro-life advocates, who are 22 times more likely to suffer violent attacks than abortion facilities, a new study has found.

Vandals and domestic terrorists attacked pro-life churches and pregnancy resource centers 135 times between May 3, when a still-unknown party leaked the Supreme Court’s Dobbs ruling, and September 24. Researchers verified six attacks on abortion facilities during the same period. “The bottom line is that after the Dobbs decision was leaked, there was over 22 times more violence directed against pro-life groups than pro-choice organizations,” said the study, performed by the Crime Prevention Research Center (CPRC).

“The overwhelming narrative in the media” holds that “those on the Right are responsible for most of the politically motivated violence in the U.S. It has been a theme in the news media after the Supreme Court’s Dobbs decision was leaked, with many claiming that there was disproportionate violence against pro-choice providers,” said John Lott, Ph.D., founder of the CPRC, in an email message to The Washington Stand. But that’s not what the data show.

The anti-life violence reached its apogee on September 24 with the shooting of an 83-year-old pro-life volunteer in Lake Odessa, Michigan, as she campaigned against the state’s controversial Proposition 3 ballot referendum.

Vandals firebombed a pregnancy resource center operated by Wisconsin Family Action and the Oregon Right to Life headquarters on May 8, and engaged in arson against CompassCare’s pro-life women’s center in Buffalo on June 7. They also set a Catholic bookstore in Houston ablaze on June 25. Those explosive acts of destruction amid dozens of acts of vandalism, including smashing the windows of pro-life churches, pregnancy centers, businesses, and nonprofits.

Some of the attacks were explicitly theological or blasphemous — potential violations of federal civil rights laws protecting Americans against religious discrimination. Criminals scrawled the message “Abort the church” on a Philadelphia Catholic church in June. In July, vandals spraypainted “F*** the church” on Holy Family Catholic Church in Hillsborough, North Carolina. Vandals wrote “God is a woman” on the exterior of the Compassion and Hope Pregnancy Center in Pocatello, Idaho this summer, as well.

Yet the legacy media have “uncritically accepted pro-choice claims of violence without asking for a list of cases,” noted Lott.

The media have reported that attacks on abortion facilities more than doubled in 2021, according to a report from the National Abortion Federation (NAF), which describes itself as “professional association of abortion providers.” NAF released the report on June 24 — the same day the Supreme Court overturned Roe v. Wade. NAF alleges 128 attacks on abortion facilities, which it ties to the D.C. riot on January 6.

Yet a CPRC researcher said, when they asked, NAF did not substantiate each of the 128 attacks. “When I called the operator at the NAF, they directed me to email the DC Abortion Fund [DCAF],” wrote the researcher. “I emailed the NAF and DCAF seven times between October 10th and October 25th. As of October 31st, while I got automated responses indicating they had received the messages, I never received any further response.”

“We felt it was important to identify and read each case,” wrote the CPRC researcher. Abortion activists have a storied history of lies and fabrications to advance their political aims, such as inventing the alleged rape of Jane Roe that precipitated the Roe v. Wade decision.

Although the Justice Department has arrested some who perpetrated threats or violence against abortion facilities, the Biden administration has yet to announce a single arrest involving anyone who attacked a pro-life pregnancy resource center or house of worship.

Much of the focus on “political violence” revolves around the disputed details of last Friday’s attack on 82-year-old Paul Pelosi, the husband of the Speaker of the House. Hillary Clinton told MSNBC host Joy Reid on Tuesday that the violence was egged on by “a whole political party.”

“There always been a streak of violence, of racism, misogyny, antisemitism,” in the United States, which “has certainly been thrown into very high relief by the horrific attack on Paul Pelosi.” She did not explain how an attack by one white male Gentile on another embodies racism, misogyny, or antisemitism.

“Donald Trump is 100% responsible for this” and “must be indicted,” agreed film director Rob Reiner.