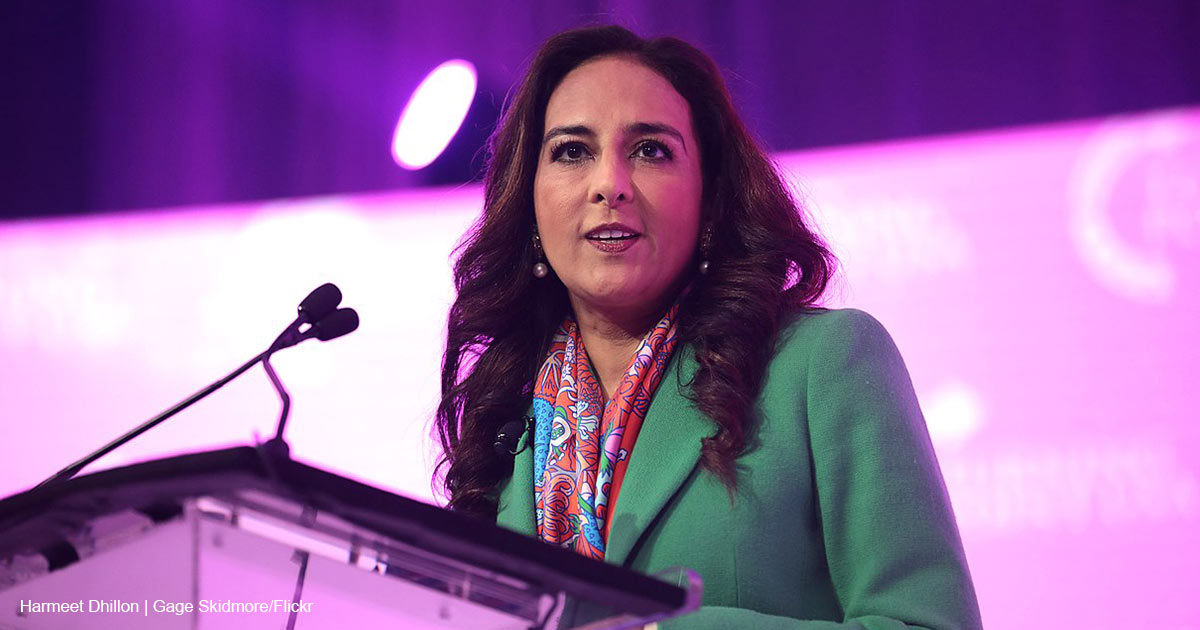 After a historically bad showing in this year’s midterm elections, Republican finger-pointing has become almost a contact sport. One of the biggest targets of GOP ire is the Republican National Committee (RNC), where some critics think shaking up the leadership could put conservatives back on a winning path.

Tuesday’s runoff loss in Georgia only intensified the frustration for Republicans, who’ve launched an internal RNC advisory committee with the express purpose of seeing where the party went wrong. One of the members hand-picked for the task was Harmeet Dhillon, who announced on Monday night that she’s challenging current chair Ronna McDaniel for the job.

Dhillon, a constitutional attorney who currently heads the Republican National Lawyers Association, told Fox News, “Republicans are tired of losing, and I think that we really need to radically reshape our leadership in order to win,” she said. “And we can’t keep running elections like we did in the 90s and the 2000s.” Her bid is widely considered McDaniel’s stiffest competition now that New York Congressman Lee Zeldin (R) has dropped out of the race. MyPillow founder Mike Lindell is also vying for the post.

Over her career, Dhillon has defended Christian students, pro-life journalists, and victims of the gender transition industry; she has also aligned herself with Republicans who identify as transgender, voiced evolving views on abortion, and said the government should have no role in sanctioning marriages.

Some of the heartburn over Dhillon’s candidacy, at least in conservative circles, traces back to her membership on the board of the northern California chapter of the American Civil Liberties Union after 9/11. Dhillon said she became “a card-carrying member of the ACLU during college,” because it defended her after Dartmouth College suspended her writers during the time she edited the Ivy League institution’s conservative publication. Dhillon, a confirmed civil libertarian, left the ACLU’s board in 2005.

Dhillon, 53, has long based her litigation in San Francisco, where she once made a $250 donation to Democratic city district attorney candidate Kamala Harris. She defended the 2003 contribution on the grounds that Harris was “the more conservative candidate” in the famously leftist city.

More recently, Dhillon has worked alongside LGBTQ activists in the GOP, serving as general counsel for Caitlyn Jenner’s failed race for governor in California’s 2021 recall election.

Raising the eyebrows of social conservatives, Dhillon directly facilitated the entrance of at least one transgender-identifying individual to official Republican planning and strategy events. Dhillon met Gina Roberts, a man who identifies as a woman, at the RNC’s quarterly meeting in February 2017. Roberts later contacted Dhillon, who sponsored his attendance at the RNC’s spring meeting in May 2017. Roberts is chapter president of the San Diego chapter of the Log Cabin Republicans and, as a member of the Transgender Leadership Caucus, “presented a report to the Department of Education on transgender student safety issues.”

Some see these working relationships as a sign that she believes LGBT activists should have a seat at the table in the Republican Party — and a hand in crafting party policy.

Dhillon’s public positions on such social issues as abortion and the definition of marriage seem to have “evolved” over the years.

In 2012, Dhillon took the libertarian view that the state should not regulate either issue. She described herself as “personally very conservative socially.” (“I would never have an abortion, and my religion does not recognize gay marriage,” she said.) Yet she continued, “What I believe, though, is that the government should not interfere in most private choices by individuals. I also don’t think the government should be taking a position on promoting particular religious values. I think that the idea that a social contract between a pair of consenting adults should be governed by religious themes and religious concerns — I think that’s anathema to a secular society such as we have.”

She made these remarks while running a doomed campaign against Democrat Mark Leno for the California State Senate seat ... representing San Francisco.

By 2018, she seemed to change her view on abortion. “Life begins at conception,” declared Dhillon. “Abortion should only be allowed in limited circumstances — life of the mother and rape.”

She also forced Inc. magazine to make a correction, which said: “An earlier version of this article described Harmeet Dhillon as opposing governmental discrimination against same-sex marriage and efforts to overturn the Roe v. Wade Supreme Court ruling on abortion. Those views were attributed to her in a 2011 article in the San Francisco Chronicle, but Dhillon says the author of that article misstated her positions.”

“She declined to clarify what her views on abortion and same-sex marriage are,” reported Inc.

Years earlier, Dhillon spoke out against the forced “resignation” of Brendan Eich as CEO of Mozilla in 2014, after it came to light that Eich had made a donation to California’s successful constitutional marriage protection amendment. At the time, Dhillon was vice chair of the California state Republican Party.

Since that time Dhillon, as CEO of the Center for American Liberty, has represented some of the most beloved figures in conservatism and become a fixture on Fox News. Dhillon acted as counsel for David Daleiden, the undercover reporter who exposed Planned Parenthood’s sale of aborted babies’ body parts. Dhillon is presently the lawyer of detransitioners Chloe Cole and Jessica Konen, who is suing teachers for advising her to undergo gender transition procedures at age 11.

Dhillon has defended religious liberty. In March, she became the legal advocate for a 14-year-old Christian who filed suit against Mater Academy, a public charter school in Florida, after educators told him to stop bringing his Bible to school.

Whether Dhillon’s mixed messages on social issues will doom her candidacy remains to be seen. As of Monday morning, McDaniel was reported to have secured the support of 107 of the 168 RNC’s voting members — well above the number she needs to be reelected.