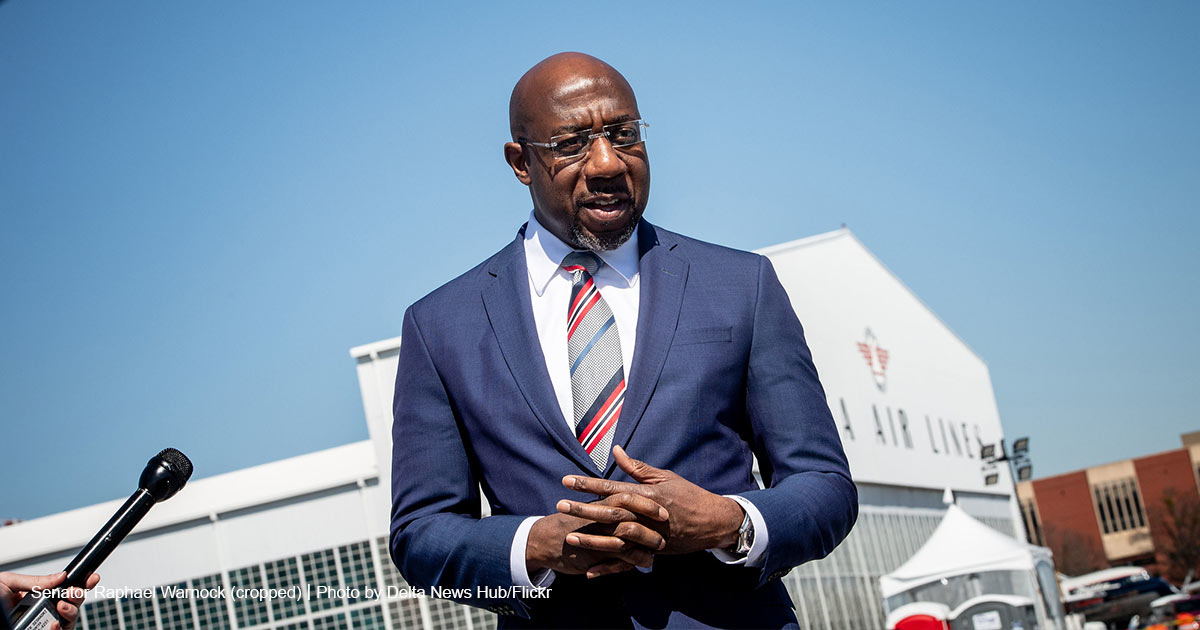 As Georgia voters go to the polls in Tuesday’s U.S. Senate runoff election, the overwhelmingly Christian state could again be represented by a pastor who will use the Senate to promote his “rejection of the Bible’s teachings” on issues ranging from abortion to the importance of the resurrection of Christ. Warnock has supported legislation to authorize abortion-on-demand until birth, strip Christians of conscience and religious liberty rights, and claimed Christians who oppose socialism need to “read the Bible” — claiming he holds a biblical position on each topic.

“Raphael Warnock has made his faith and pulpit ministry a central theme of his campaign. Politically, this is strategic, because most Georgia voters value their faith and respect the Christian ministry,” David Closson, director of the Center for Biblical Worldview at Family Research Council, told The Washington Stand. Polls show around two-thirds of Georgian voters consider themselves very religious. “But it’s important to examine the content of Warnock’s faith which is a distillation of textbook theological liberalism.”

Warnock graduated from liberal Union Theological Seminary. Warnock evaded questions about whether he attended a speech from Cuban dictator Fidel Castro, hosted by the Abyssinian Baptist Church in 1995, when Warnock served as its youth leader. As pastor of Atlanta’s Ebenezer Baptist Church, Warnock fills his sermons “with Scripture-specific anecdotes as well as calls for Medicaid expansion and turning out to vote,” the New York Times reported. Voting, he has said, is “a kind of prayer.”

“Like all forms of theological liberalism, Raphael Warnock’s theology tragically deviates in significant ways from historic Christianity. This is most prominent in his rejection of the Bible’s teaching on marriage, abortion, and sexuality,” Closson told TWS.

Warnock has stubbornly insisted abortion-on-demand is compatible with his role as a minister. When WGAU host Tim Bryant asked how Warnock’s support for abortion-on-demand fit with his position as a “minister, a leader of the church, [and] a man of God,” Warnock replied: “For me, reproductive justice is consistent with my commitment to that. I believe unequivocally in a woman’s right to choose.”

“I am a pro-choice pastor,” Warnock tweeted shortly after his election in 2020.

Warnock’s wholehearted support for abortion proved so scandalous that a coalition of black pastors rebuked him for his comments. “We believe these statements represent grave errors of judgment and a lapse in pastoral responsibility, and we entreat you to reconsider them,” they wrote. “As a Christian pastor and as a , you have a duty to denounce the evil of abortion, which kills a disproportionate number of Black children. Your open advocacy of abortion is a scandal to the faith and to the Black community. … We implore you to uphold the Biblical defense of life and to fight against the systemic racism of abortion.” Then-White House spokesperson Kayleigh McEnany also referenced a list of Bible verses opposing abortion — the historic position of the Christian church since the first century A.D.

As a senator, Warnock co-sponsored the so-called Women's Health Protection Act, which would strike down nearly every pro-life protection in all 50 states. “Instead of aborting those babies, why are you not baptizing those babies?” asked Walker at their debate.

Warnock has also controversially cited the Bible to justify his support of the LGBTQ agenda. “Here’s what I know from over 20 years as a Baptist pastor — while faith at its best can heal and bring us closer together, too often, I have witnessed it used to justify injustice against women, minorities, and especially LGBTQ people. Faith wielded as a cudgel to harm our neighbor has no place in our pews, in our streets, or in the halls of Congress,” Warnock wrote in The Advocate, an LGBT publication.

Most consequentially, Warnock supported the so-called Equality Act, which “would mandate government-imposed inequality and unfairness by requiring acceptance of a particular ideology about sexual ethics, while leaving no room for differing opinions and legitimate public debate,” said Mary Beth Waddell, director of Federal Affairs for Family and Religious Liberty at Family Research Council. “Simply put, the Equality Act mandates an anti-life, anti-family, and anti-faith agenda throughout federal law, and would be a disaster for all Americans.”

Warnock also sponsored a resolution declaring June LGBTQ Pride Month. “As we reflect on how far we have come, let’s remember how far we have to go to create a world where we *all* feel safe to be our authentic selves,” he wrote. (Emphasis in original.) “I’ll always be an ally of the LGBTQIA+ community.”

Warnock’s theological liberalism pervades his views of such fundamental doctrines as the resurrection of Christ. Warnock made statements seemingly contradicting the religious basis for Easter, as well as proclaiming a works-based salvation. “The meaning of Easter is more transcendent than the resurrection of Jesus Christ. Whether you are Christian or not, through a commitment to helping others we are able to save ourselves,” declared Warnock in a message he later scrubbed from his Twitter account.

He also preached from his pulpit that embracing a Marxist worldview “actually makes you a Christian.” Since “the early church was a socialist church,” Warnock asserted, “evangelicals who stand on the Bible” but reject socialism need to “go back and read the Bible.”

Christian leaders from Protestant, Roman Catholic, and Eastern Orthodox backgrounds have all declared socialism incompatible with Christianity. C.H. Spurgeon warned Christians not to “exchange the gold of individual Christianity for the base metal of Christian socialism,” and Rev. Billy Graham noted even the U.K.’s welfare state “created a thousand economic problems.” Pope Pius XI wrote in a groundbreaking encyclical on Catholic social teaching that “no one can be at the same time a good Catholic and a true socialist.”

Yet Warnock propounds his liberalism self-consciously as a man of the cloth. “I’m not a senator who used to be a pastor. You might as well know that you sent a pastor to the Senate,” Warnock told canvassers before the November election, which saw both him and Republican candidate Herschel Walker fall short of the 50% threshold needed to declare outright victory, leading to today’s runoff election.

As of this writing, more than 1.8 million voters cast early ballots in the runoff — 27% of all active voters.

The state has broken all prior records for the largest number of early votes cast in a day three times.

“Even though the senator retains the title of ‘reverend,’ his theological and political commitments differ in significant ways from most Christians in Georgia,” Closson told TWS.