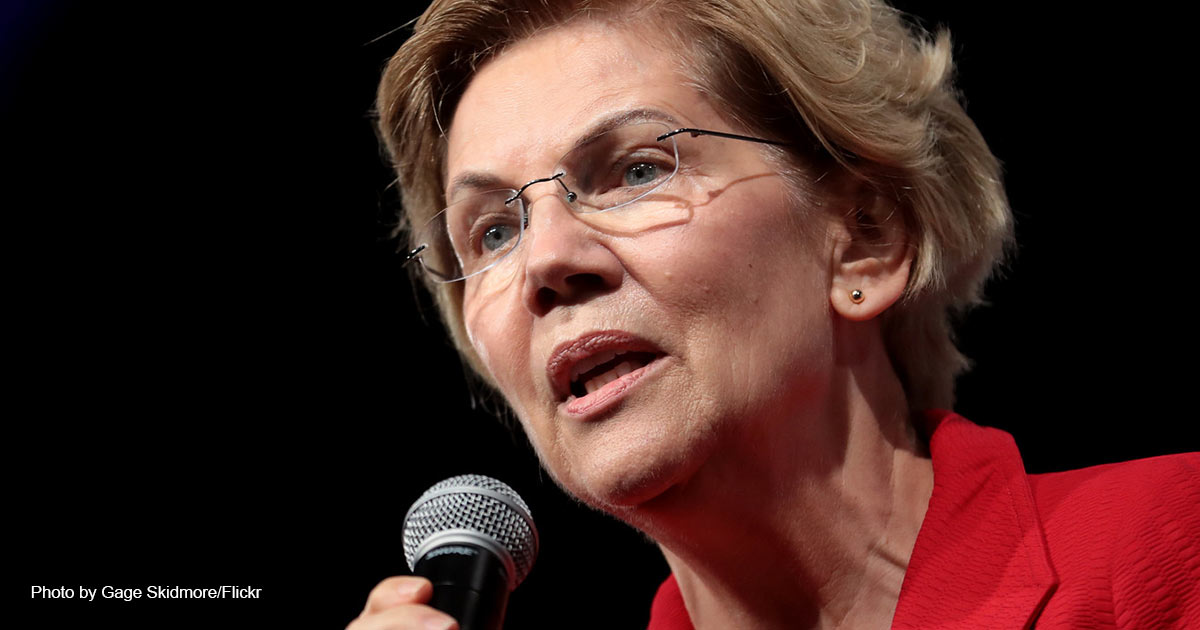 Why Does Elizabeth Warren Want To ‘Put a Stop’ to Pro-life Centers? ‘Follow the Money’

Pro-life advocates say Senator Elizabeth Warren’s (D-Mass.) plea to “put a stop” to pro-life pregnancy resource centers is a faith-based initiative: It’s based on abortion activists’ pursuit of the Almighty Dollar. While the nation’s largest abortion business stands to lose more than $1 billion in annual revenue if lawmakers recognize the right to life, pro-life advocates pay for their charitable actions out of their own pockets.

Warren recently went viral with a bitter diatribe directed against pro-life pregnancy centers. “Here in Massachusetts, these so-called crisis pregnancy centers outnumber genuine abortion clinics by 3 to 1,” Warren told local media last Wednesday. “They are giving it over to people who wish them harm. And that has to stop. We need to put a stop to that in Massachusetts.”

But the senator has also sought to squeeze Planned Parenthood’s rivals via public and private pressure.

Just before the Dobbs decision, Warren introduced the so-called “Stop Anti-Abortion Disinformation” (SAD) Act, which would “prohibit” pro-life centers “from advertising with the use of deceptive or misleading statements.” SAD would allow the Federal Trade Commission to sue pro-life centers, obtaining a fine of up to $100,000 or “50 percent of the revenues earned by the ultimate parent entity” of the charity in the past year.

Critics say the Left’s focus on “disinformation” infringes on the First Amendment by enabling the politically powerful to suppress disfavored viewpoints. Warren evinced a similar strategy last month when she joined 20 other congressmen in pressuring Google “at the very least” to label pregnancy resource centers in its search results, “[i]f Google must continue showing these misleading results” at all. The letter noted that approximately 11% of all search results for abortion centers turn up “fake” (i.e., pro-life) centers — and one out of 10 is apparently too much competition.

But Warren may face a disinformation problem of her own: Her SAD bill asserts that “most CPCs in the United States do not employ licensed medical personnel or provide referrals for birth control or abortion.” While it is hardly surprising that pro-life centers do not refer for abortion, “79 percent or 8 out of 10 [pregnancy help centers] studied provide pregnancy confirmation ultrasounds … by licensed healthcare professionals, free of charge to patients,” noted the Charlotte Lozier Institute in a recent report.

“We give accurate medical information, unlike the abortion clinics, who say, ‘Well, you’ve got a blob of tissue in there,’” said Donna Harrison, CEO of the American Association of Pro-life Obstetricians and Gynecologists (AAPLOG) on Thursday’s edition of “Washington Watch with Tony Perkins.” “Rather than giving women accurate information about how far along the baby is, what the baby looks like by ultrasound, what the real risks and complications are of an abortion, the abortion industry pushes abortion as the only option.”

But the real bottom line is the bottom line. “The pregnancy care centers don’t financially benefit from this outpouring of love and compassion,” Harrison told Perkins. “Compare it. Follow the money.”

Planned Parenthood reported $1.64 billion — including $618 million in taxpayer funding — in total revenue in its most recent annual report. Planned Parenthood carried out 354,871 abortions, compared to providing 8,626 instances of prenatal care and 2,667 adoption referrals.

Meanwhile, in 2019 approximately 2,700 pro-life pregnancy resources centers in the U.S. “served roughly two million women, men, and youth with services estimated at a value of over $266 million,” said the Charlotte Lozier Institute. Pregnancy resource centers saved an estimated 828,131 lives between 2016 and 2020. Of the 10,200 licensed medical professionals who provided services in pro-life women’s centers, 6,424 volunteered their time and services.

Abortionists do not donate their services, and even abortion funds refuse to pay the full amount of an abortion.

“We’ve got an outpouring of compassion and love and accurate information for women being given at pregnancy care centers across the nation. And that’s threatening to the bottom line of Planned Parenthood,” said Harrison. “If there’s any group of people who are empowering women and caring for their needs, it’s the pregnancy care center volunteers and the physicians who are helping them.”

Family Research Council President Tony Perkins called the SAD bill “a classic example of projection,” designed to stifle pro-life advocates just as the Dobbs decision opens the doors to redouble their support for struggling women and children. “I believe the pro-life community is going to step up,” said Perkins. “I think you’re going to see the creation of new adoption agencies. I think this is going to be an explosion of pro-life activity.”

Harrison noted that pregnancy resource centers provide a panoply of services, from ultrasounds, to baby clothes, to job and life-skills referrals for mothers to advance in their career as they grow their family.

The pro-life centers, which both sides agree are often faith-based, can provide another good the abortion facilities never can: the confidence that the woman can access strength from a Higher Power. “So many of these care pregnancy centers share the love of God, both in actions and in words, and it’s transformative,” said Perkins. “I cannot tell you the number of young women that I have seen whose lives have been transformed. Not only do they keep their children, the children that they were pregnant with, but they themselves experience new birth, which gave them a new lease on life and a whole new outlook addressing the underlying issues.”

Abortion facilities focus on “taking advantage of women in a vulnerable situation” for their own financial gain, said Harris. “What the abortion industry does is breathe out despair. And what the pregnancy care centers do is breathe out hope.” The difference between single-focus abortion facilities and comprehensive pro-life centers is “the difference between despair and hope,” said Harrison. “And the hope doesn’t disappoint.”