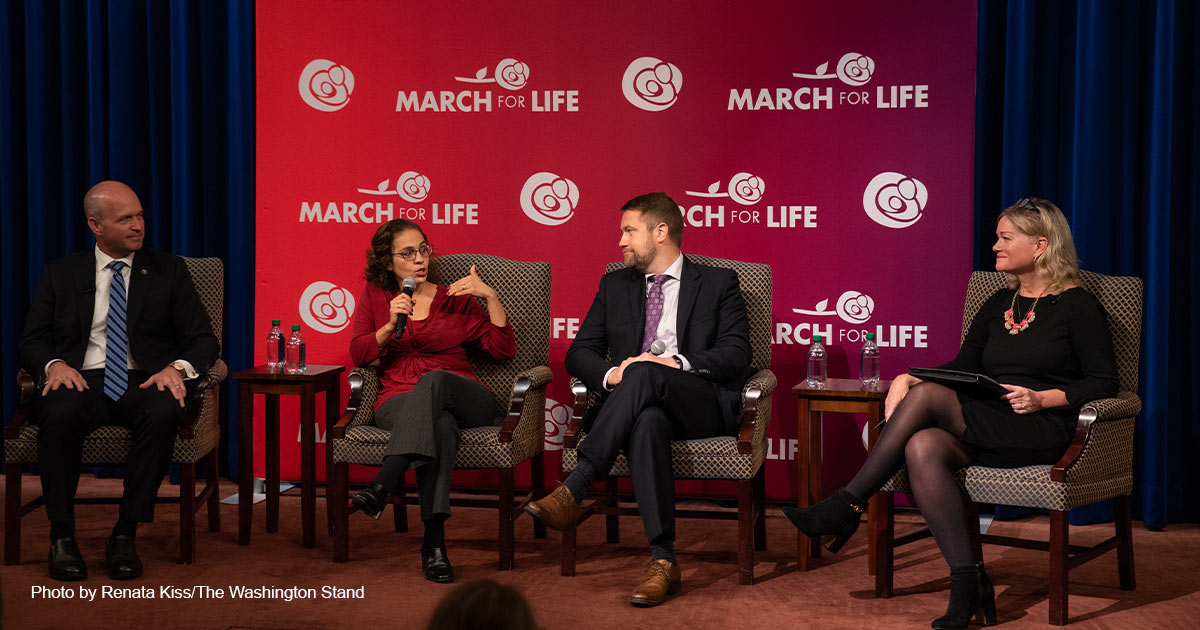 Why March for Life Post-Roe? The 2023 Theme Reveals There Is Still Work Ahead

Every year, hundreds of thousands of Americans have gathered in Washington, D.C. in the bitter cold of January for the national March for Life, marching toward the Supreme Court in commemoration of 63 million lives in the womb lost with energetic hope for the end of abortion. Men, women, children, and student groups — religious or not — from across the political aisle bundled up and poured down the streets of the nation’s capital to show solidarity with mothers in need and unborn life. After the historic overturning of Roe v. Wade on June 24, 2022, next year’s annual March for Life will be different.

This morning, March for Life president Jeanne Mancini unveiled the 2023 theme, “Next Steps: Marching in a Post Roe America.” This upcoming January’s national march will be the first of its kind in a post-Roe America, where the decision of abortion has been returned to the states and where the pro-life battle ground now lies. Instead of the traditional trek to the court, the march will now lead up to the U.S. Capitol, Mancini announced. The unveiling event was held in D.C. at The Heritage Foundation, where Mancini was joined by several pro-life advocates.

Mancini addressed a question that many have wondered about: why continue the March after Roe? She answered simply — the March is still needed, because there is still work to be done. Abortion is still legal in many states, even through all nine months in some. Mancini says she firmly believes that the Supreme Court’s Dobbs decision was made in part because they saw the faithful marching of Americans expressing their views on life. As the marching continues to where the legislative branch resides, Mancini explained that the strategic pro-life plan moving forward also includes marches across the U.S. at state capitals, and amplified support of pregnancy resource centers and care homes.

A yearly pro-life marcher herself, Mary Szoch, FRC’s director of the Center for Human Dignity, told The Washington Stand she agrees that the March is still crucial to the cause. “Since its founding in 1974, hundreds of thousands have come to D.C. to march in defense of the unborn,” she said. “With the overturning of Roe v. Wadein June, those committed to protecting life in the womb saw a great step toward victory, but still in many states unborn children’s lives are being destroyed until the moment of birth. This year, pro-lifers across America will march with the same goal as those who have marched before them — the defense of life beginning at the moment of conception.”

The Heritage Foundation’s president Kevin Roberts backed up Mancini’s call to continue marching, saying that the public witness of the pro-life movement is important on the streets of D.C. and in American institutional life. He emphasized that this is no time for pro-lifers to give up the fight in the nation’s capital just because Roe was overturned on the federal level.

A licensed, practicing, pro-life physician, Dr. Marguerite Duane took to the podium to offer her medical perspective on why the abortion issue is not a women’s issue, but a human rights one. Claiming that misinformation about pregnancy and women’s health care has been circulating since the Dobbs decision, she debunked some of the common fears touted in the media surrounding a post-Roe America. Duane addressed the common misconception that in post-Roe America, doctors would be forbidden from treating an ectopic pregnancy or miscarriage, claiming that it is a fallacy and not equivalent to abortion. She shared that since Dobbs, she has treated such cases in her own practice and still holds a medical license.

Now that several red states have enacted trigger laws that protect life from conception, some pro-lifers may be tempted to declare victory and sit this March out. Jonathan Keller, president of California Family Council, emphasized the opposite, stressing that every state has a role to play. “We cannot simply abandon blue states and retreat to red states,” he said.

“You may not care what happens in California, but California cares about you,” Keller warned, referring not only to California’s allowance for abortion through all nine months of pregnancy, but their campaign to recruit across state lines for abortions and reimbursing costs, including travel and child care. Recently, the state’s Governor Gavin Newsom (D) signed SB 107 to make their state a “data refuge” for those seeking out-of-state transgender surgeries on minors and abortions.

“Pro-lifers in states like Texas, South Dakota, and Mississippi cannot stand idly by as their fellow Americans in the womb in states like California, New York, and Maryland are killed up throughout the entirety of pregnancy,” FRC’s Szoch agreed. “So, once again, pro-lifers will march, and we will ask the members of Congress to act in defense of life. And to be clear, the pro-life movement will not be satisfied with half measures. Those who value babies in the womb will march until every unborn child, whether four weeks gestation or 40, whether conceived in Oregon or Oklahoma, is protected from the evil of abortion.”