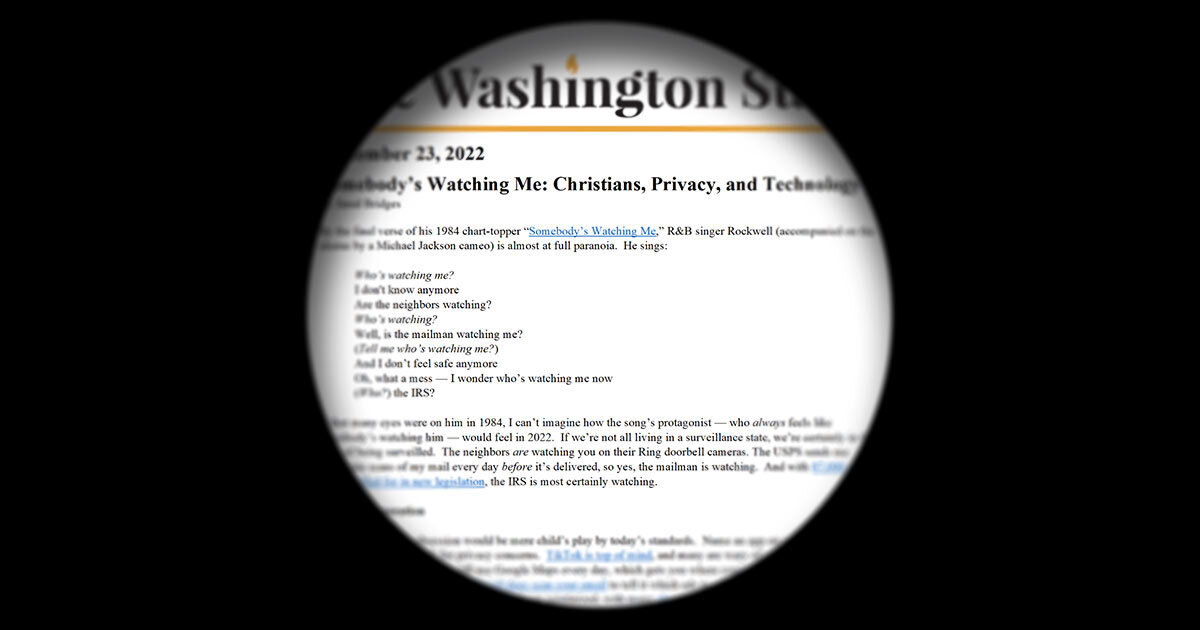 By the final verse of his 1984 chart-topper “Somebody’s Watching Me,” R&B singer Rockwell (accompanied on the chorus by a Michael Jackson cameo) is almost at full paranoia. He sings:

If that many eyes were on him in 1984, I can’t imagine how the song’s protagonist — who always feels like somebody’s watching him — would feel in 2022. If we’re not all living in a surveillance state, we’re certainly in the state of being surveilled. The neighbors are watching you on their Ring doorbell cameras. The USPS sends me electronic scans of my mail every day before it’s delivered, so yes, the mailman is watching. And with 87,000 new IRS agents called for in new legislation, the IRS is most certainly watching.

Rockwell’s privacy obsession would be mere child’s play by today’s standards. Name an app on your phone that hasn’t been taken to task for privacy concerns. TikTok is top of mind, and many are wary of using it. But I’ll bet many who have discarded it still use Google Maps every day, which gets you where you’re going, but also very much knows where you are. And yes, Gmail does scan your email to tell it which ads to place at the top. Facebook’s privacy considerations (or lack thereof) have long been scrutinized, with many abandoning the platform because of it.

And while social media is at the forefront of the national conversation on privacy, it’s not the only front. Recently a judge ruled that proctors were not allowed to scan students’ rooms (with the students’ own cameras) during remote exams. The Supreme Court’s overturning of the Roe v. Wade decision reminded us of the fact that one of the primary considerations in the 1973 case had to do with the court’s view of whether a right to abortion was included within a constitutional right to privacy. And don’t forget that it hasn’t been that long ago since some very public venues required proof of which vaccines were or were not entering your private bloodstream.

With such rampant prying eyes into so many areas of our lives, what are followers of Christ to think about this? After all, if we really believe Scripture, we have no privacy at all before the Lord.

In Luke 12:2, Jesus said, “Nothing is covered up that will not be revealed, or hidden that will not be known.” Likewise, Hebrews 4:13 reminds us, “And no creature is hidden from his sight, but all are naked and exposed to the eyes of him to whom we must give account.” And John tells us of Jesus in John 2:24–25 that, “… He knew all people and needed no one to bear witness about man, for he himself knew what was in man.”

The fig leaves which Adam and Eve used to cover themselves never fully did the job. The Bible is abundantly clear: we are naked and exposed, and the Lord knows what’s inside of us.

The fact that there’s no hiding from God informs how we ourselves should view our own privacy, but it’s not the whole story. The Bible also gives us plenty of instances of parts of our lives that are and should be private. Private property, for example, is amply evidenced in Scripture. We’re warned not to steal or covet someone else’s property, and we’re exhorted to give generously from our belongings. But the call to privacy doesn’t just end there.

There’s no doubt that our faith should be acknowledged and practiced in public. But our faith is not only public. Scripture also clearly points to an inviolate, private practice of faith that integrally reflects the public. In the Sermon on the Mount, Jesus says, “But when you pray, go into your room and shut the door and pray to your Father who is in secret. And your Father who sees in secret will reward you” (Matthew 6:6).

Likewise, Jesus explained things in private to his disciples that he didn’t in public. Even the first step for a Christian who is sinned against involves privacy: “If your brother sins against you, go and tell him his fault, between you and him alone. If he listens to you, you have gained your brother” ().

In each of these cases, privacy is granted or encouraged by God so that his good purposes might be fulfilled. Our private property should be managed in a way that brings God glory. Likewise, our private inner lives are for cultivation of a character that’s reflective of God’s nature. Any privacy we obtain should be used toward this end.

Never in Scripture is privacy encouraged for the cultivation of sin. To be clear, a wrong use of privacy would be for actions such as hiding illicit relationships, pornography use, substance abuse, illegal activity, etc. When you have sinned against the Lord, says Numbers 32:23, you can be sure your sin will find you out. Because we are always in the audience of the Lord, the end of privacy should always be pleasing to him.

If the above is true, then privacy functions for the Christian as a space for personal growth in faith. Therefore, a private environment that encourages such growth is important — if not necessary — for personal discipleship. A Christian needs space, both physical and mental, to pray, think, and reflect in secret. And that sphere of privacy is not necessarily limited only to the individual. The church, after all, has historically (COVID-era outside church gatherings notwithstanding) met in private or semi-private places. The door on the building may not be there to keep out interlopers, but it does keep out the wind and the rain and the noise of the outside world that would distract the church from focused worship. And if worship lacks focus, we quickly lose its focal point. Privacy brings us a needed focus for our discipleship.

The trouble is that increasingly, as noted above, our technological obsessions have us increasingly giving up our privacy voluntarily. Free things are never truly free, and even things that makes our lives easier — free email, for example — often cost us valuable privacy. It’s very handy (and often safer) to ask Siri for directions, but when our devices are always listening, they are always listening.

In his book “Live Not by Lies,” Rod Dreher interviewed Kamila Bendova, a Czech dissident under the communist regime, who warned,

Information means power. …We know from our life under the totalitarian regime that if you know something about someone, you can manipulate him or her. You can use it against them. The secret police have evidence of everything like that. They could use it all against you. Anything! (p.70)

This may seem far-fetched to Americans who’ve never experienced anything like this before, but it’s something that’s not too distant. Take, for example, during the first few months of the COVID crisis in 2020, when administrations like Virginia Governor Ralph Northam’s set up a website for citizens to report churches, gun ranges, and other venues who violated the governor’s executive orders on COVID. If your church had, for example, followed its convictions (and the state’s religious freedom law) to meet in person — and posted about it on social media, it could be easily reported to the administration. And while no such violations were ever prosecuted (as far as I know), the mechanism was there, and lessons for Christians remain for the future.

Even to this day, nearly any time you mention COVID on social media, the snooping platforms’ artificial intelligence will add content (written as “context”) to your post explaining where “approved” information about COVID can be found. Our phones may not be tapped by the KGB, but our phones are certainly listening.

Decrease dependency on your digital diet. There’s really no other way. It’s far too consuming to attempt to live fully “off the grid,” but there are choices we can make to guard our privacy. Our AI assistants are convenient, but does Alexa, Siri, or Google really have to be on 24/7? We did once live without them, after all. Free search engines and free email are great helps as well, but since nothing is truly free, consider some of the more privacy-conscious alternatives. DuckDuckGo may not yield the same results as Google, but for most searches, it gets the job done.

Resist the public pull. There is constant pressure — from digital social platforms, no less — to make all of our lives public. Every vacation, every meal, every passing thought that comes into our head isn’t necessarily fit for public consumption. The sooner we realize the truth in that, and shut down our own self-driven paparazzi, the sooner we’ll be on a path to preserving privacy.

At one point in his song, Rockwell asks, “Can the people on TV see me … or am I just paranoid?” A Christian practice of privacy should never drive us to paranoia — after all, the Lord has put us on display to a world in need of light. We should seek the private to cultivate our growth, that we might make public the gospel of the one who is always watching us.