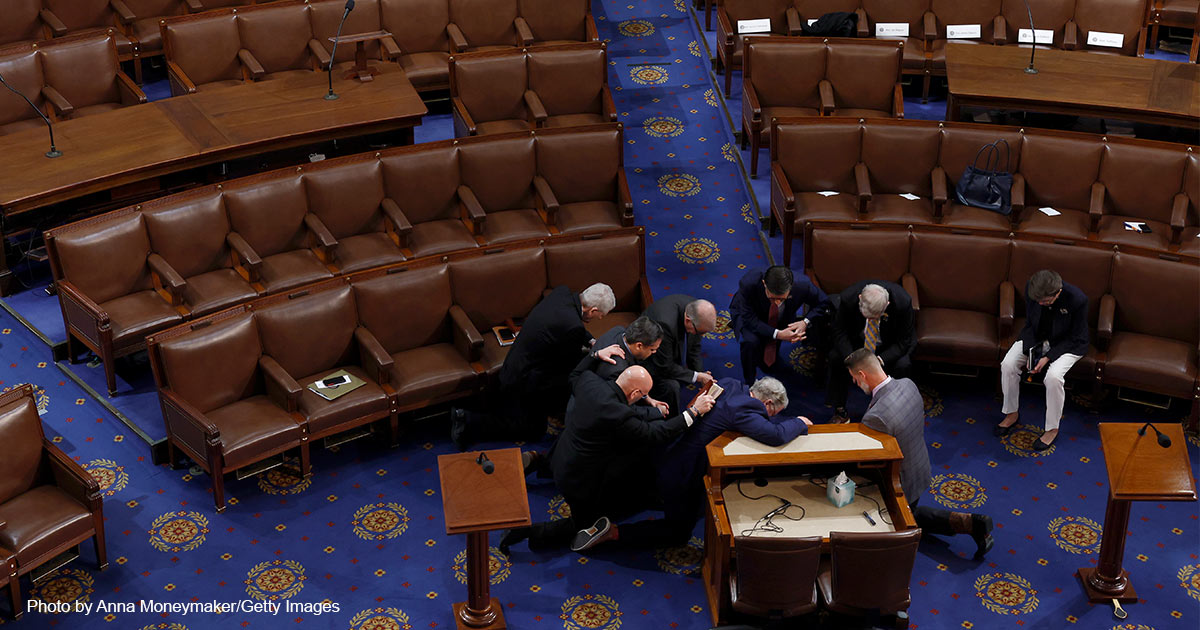 A House United: How Prayer Played a Central Role in Electing a Speaker

In the wee morning hours of Saturday, January 7, the 434 members of the House of Representatives swore an oath to “bear true faith and allegiance” to the Constitution. After 15 votes, they had finally chosen a House speaker and could all take the oath of office. A short time earlier, seven of their number had acted out their true faith and allegiance to a different, higher governmental authority.

“We have a prayer caucus in the House,” explained Representative Mike Johnson (R-La.) on FRC’s “Pray Vote Stand” (PVS) webcast. “We gather for prayer, for example, the beginning of each week … and ask the Lord for his wisdom and discernment and guidance.”

As Friday dawned with the House no closer to choosing a Speaker, “we were in a real bind,” Johnson confessed. So, the prayer caucus gathered to pray in the House chamber “in the early morning before the session began. … We repented to the Lord for our individual transgressions, and those collectively as a legislative body, and as a people, as a nation. And we asked for his divine guidance.”

“I believe the Lord has answered the prayers of many because there was an outcome in which I believe the Congress is stronger,” remarked FRC President Tony Perkins, who hosted PVS. “Last Friday, as the future looked questionable — there was a lot of angst, a lot of tension — you and your colleagues gathered on the floor of the House to pray.”

Johnson agreed. “My specific prayer in that circle was, ‘Lord, the House is divided. We know that a house divided cannot stand. And we ask you to unite this House.’ And in short order, that’s what happened. And I tell you, this morning at the meeting with all the House Republicans, I think this group has never been more united than it is right now.”

In four rounds of voting during the Friday session, 20 Republicans who had opposed Kevin McCarthy’s bid for speaker changed their votes to him or “present,” enabling him to win a majority with 216 votes on the 15th ballot.

“The core group that joined together on that floor for prayer [is] accustomed to praying together, because we do it routinely,” said Johnson. “We pray for individual prayer requests, often of our constituents and those that we know who are struggling. And it’s just a great time of unity and bonding.”

“Friday’s events proved the power of prayer in miraculous ways,” said Representative Greg Steube (R-Fla.), one the members who prayed on the House floor. “We lifted the speaker’s race up to the Lord, and immediately after the prayer of seven members, 14 members changed their vote. And, by the end of the day, it had concluded, and we had a speaker. My church and many others prayed together at the same time, and the power of the Holy Spirit was seen in the results thereafter. I want to thank Jon and Jolene Hamill of Lamplighter Ministries for the prayer.”

Steube’s office provided The Washington Stand with a copy of his prayer on the House floor, which read in part, “Father God, we lift up to you the seat of authority of the Speaker of the House of Representatives. We bring this seat literally before the Throne of the Ancient of Days, in the highest Court of the Kingdom of God. We ask for Your verdict of justice in favor of the saints. … Forgive the sins that have taken place by those stewarding this seat, including all sexual immorality, abuse of power, abuse of children, unjust bloodshed, occult sacrifice, betrayal of national interest, etc. Ultimately, they are all a betrayal of You. Please forgive these grave injustices. …”

Another member who knelt in prayer was Representative Tim Walberg (R-Mich.). “As a person of faith, I believe in the power of prayer — both in calm and challenging times,” he told TWS. “Before the vote took place, my colleagues and I bowed our heads and knelt on our knees in the well of the House to seek God’s guidance and ask that His almighty hand continue to watch over and sustain our great land.”

Johnson said that many “committed, solid believers” serve in Congress. “They’re not always the ones you see on TV, but they are the ones that I believe in many ways are holding the country together. And we’re seeking God’s providence, guidance, and direction every single day. There’s always been a remnant that God works through, and this group here believes that that’s still possible.”

Perkins noted this prayer on the House floor was “in sharp contrast to the efforts we’ve seen in recent years to remove God from Congress.” Last spring, in response to Rep. Greg Steube (R-Fla.) quoting from the book of Deuteronomy, Representative Jerry Nadler (D-N.Y.) retorted, “What any religious tradition describes as God’s will is no concern of this Congress.”

“This is a spiritual battle,” Johnson added. “When people of faith have their voices censored and silenced routinely and increasingly, it’s a threat to the survival of the republic. I mean it; this is not hyperbole.”

But no one interrupted the Friday morning prayer circle. “Desperate times lead people to turn to God,” said Perkins.

Last Wednesday, The Washington Stand reported on the unanimous outpouring of prayer for Buffalo Bills safety Damar Hamlin. In seeming answer to those prayers, Hamlin was safely discharged from the hospital this Wednesday, nine days after the 24-year-old suffered cardiac arrest on-field during Monday Night Football.