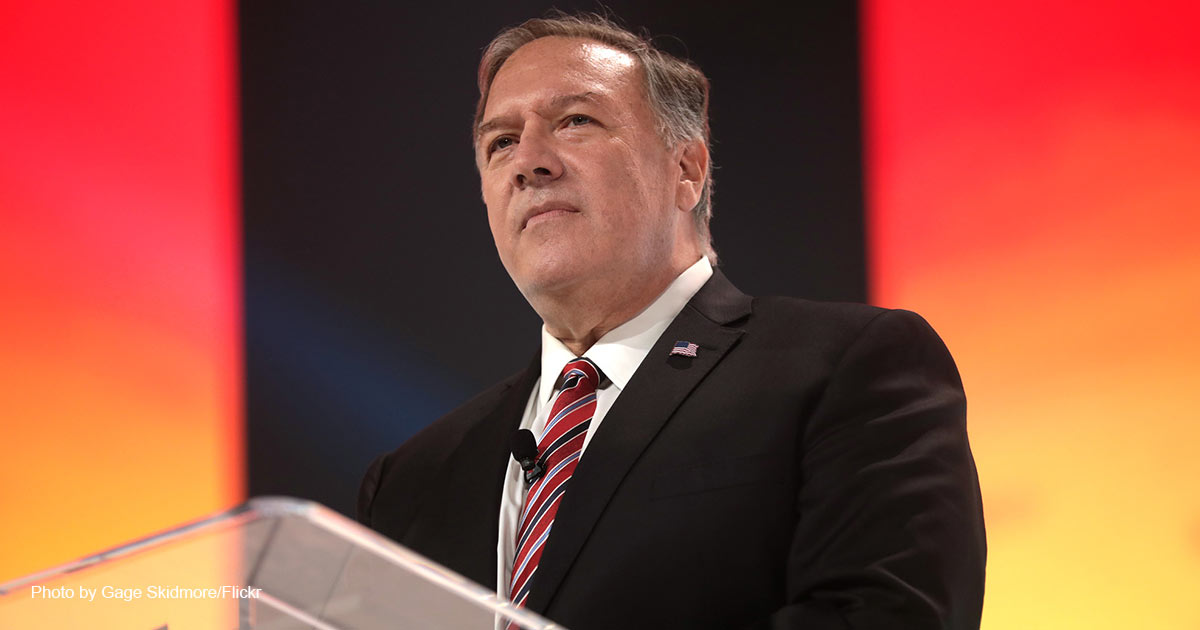 “These social justice warriors that are inside the gates, that are inside our bureaucracies, are working to undermine these institutions,” said Pompeo on “Washington Watch with Tony Perkins” Monday. “I saw it in my time of service as Secretary of State and as CIA director” in the Trump administration.

“I think it is an attempt by the progressive Left to undermine one more central institution. They came for our universities. They came for our K-12 schools. They’re doing it in our churches and synagogues,” Pompeo told Perkins. The military represents “just another place that they’re coming after the Judeo-Christian Christian heritage of our country.”

Pompeo’s account is not just based on his own observation; he’s asked soldiers to report the armed services’ attempts to indoctrinate them or dislodge their deeply held religious views. “We’ve had over 200 people already send us some of the most harrowing stories you can imagine about what they experienced in their time in service,” he said.

Until he can begin sharing autobiographical accounts shared through his website, TroopsSpeakOut.com, Pompeo launched a series of ads highlighting the Left’s erosion of the military.

“I get really sad when I hear our most senior leaders begin to adopt some of this toxic rhetoric as though it’s truth,” says Bill Brewer, a retired, African-American U.S. Air Force veteran, in one of the three ads featuring Pompeo. “I’ve had the chance to lead hundreds of people who didn’t look like me, and it didn’t matter to any of them.”

The Biden administration’s decision to promote critical race theory’s doctrine that the United States is “systemically racist” could hardly differ more from President Ronald Reagan’s call to tear down the Berlin Wall, which inspired a young Pompeo just beginning his service as an armor officer in mid-1980s West Germany. The Biden administration has also focused on mainstreaming transgenderism, a condition applying to 0.3% of the U.S. population according to U.S. Census Bureau data. “It’s a little worrying that we have more briefs about D&I [diversity and inclusion] than briefs about foreign adversaries, emerging technologies or current events across the world,” a cadet at the U.S. Air Force Academy told Fox News. The cadet cited the academy’s promotion of the Patti Grace Smith Fellowship — which only accepts black applicants — and the Brooke Owens Fellowship, which is open to biological women and “all gender minorities,” including “non-binary, agender, bigender, two-spirit, demigender, genderfluid, genderqueer, a transgender woman [male], or another form of gender minority.” But “if you are a cisgender man, this program isn’t for you,” the application says.

Woke segregation based on theoretical genders does not sit well with some veterans. “Nature, and nature’s God, have made it crystal clear that there are only two sexes: man and woman,” wrote Bill Donohue, president of the Catholic League and a U.S. Air Force veteran, in a letter last week to the academy’s superintendent, Lt. Gen. Richard Clark. Classifications such as “non-binary, agender,” and so forth “are concepts made up by academics,” he added. “They may exist on the blackboard, but in the real world they do not exist.”

Recent exposes from the Claremont Institute have showed that far-Left ideology also pervades military schools that teach the children of 66,000 U.S. soldiers stationed in 11 countries, run by the U.S. Department of Defense Education (DoDEA). Federally funded presenters encouraged DoDEA teachers that “the ideal time” to “talk about LGBTQ+ things [is] elementary school,” because it undermines children who are “already starting to develop a stable understanding of their gender identity.” They also teach CRT and “global citizenship.”

Critics fear the focus on ideological uniformity for those in uniform may shift the military’s focus away from waging war. “During the month of June, when China was launching a new aircraft carrier, the Navy was launching an ad campaign teaching sailors how to use the ‘proper’ pronouns” for people who identify as another gender, “completely oblivious to the threats that exist out there in a very dangerous world,” said Perkins. The widely panned video — in which two non-threatening presenters asked how soldiers can “go about creating a safe space for everybody” — went public days after the People’s Republic of China debuted its new Fujian aircraft carrier, its most advanced aircraft carrier to date.

Social engineering in the military, and the attendant “education” of soldiers to facilitate socially liberal policies, has seesawed between administrations for the last three decades. President Bill Clinton lifted the military ban on open homosexual service by instituting the “Don’t Ask, Don’t Tell” policy. President Barack Obama rescinded the ban altogether, instituting mandatory courses telling soldiers to accept men kissing other men. “If a Marine spots two men in his battalion kissing off-duty at a shopping mall, he should react as if he were seeing a man and woman, according to the training materials,” reported the Associated Press. President Donald Trump signed an executive order in September 2020 freezing all Defense Department teaching CRT concepts such as the holding that any “individual, by virtue of his or her race or sex, is inherently racist, sexist, or oppressive.” President Joe Biden, in turn, rescinded Trump’s prohibition via another executive order Biden signed on his first day in office.

As these policies have come to light, military recruitment has plummeted. The U.S. Army fell 25% short of its annual recruitment goal in the last fiscal year, which concluded last week; the army recruited only 45,000 of its 60,000 goal, the Associated Press reported. The Air Force barely met its goal by dipping deeply into its delayed entry pool.

Pompeo believes fewer people are signing up as the Biden administration focuses on fighting for leftist causes instead of fighting America’s enemies. He cited a moment last June when Biden told Air Force servicemen stationed in the U.K. that, when he visited the Pentagon as vice president in 2009, “this is not a joke — you know what the Joint Chiefs told us the greatest physical threat facing America was? Global warming.”

“If we forget the central thesis of what our military is designed to do,” warned Pompeo, “our Army, our military, our Marines will lose its capacity to wage and win our wars.”

“We can’t let that happen,” he told Perkins. “That’s why I’m engaged in this fight.”

“You’ve got to raise up a new breed, a new generation” of “battle-hardened” leaders “who focus on the men and the mission, not just a woke agenda — or any other agenda outside of winning the nation’s wars.”