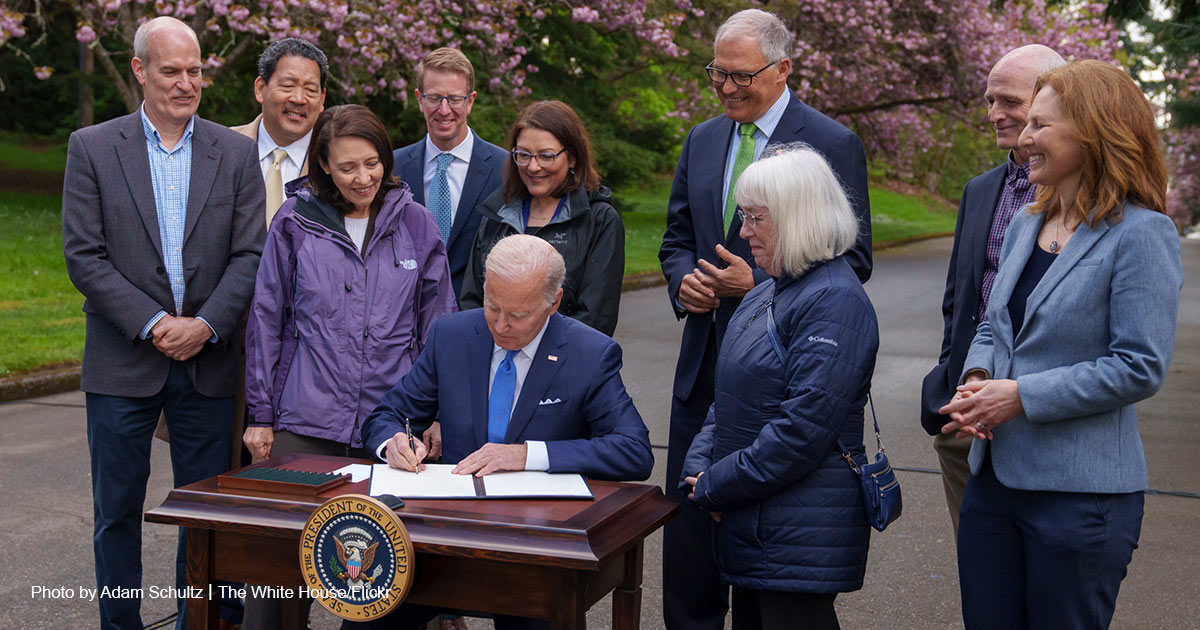 Watching his environmental legislation stymied by popular will and the democratic process, President Joe Biden on Wednesday announced he would implement some of his Green agenda through executive actions. But legal experts tell The Washington Stand that the president has overreached the limits of his constitutional authority — and that his policies will make Americans pay even more for energy.

Speaking in Massachusetts in front of a former coal-fired plant that’s transitioning to wind power, Biden called climate change an “emergency” and “literally an existential threat to our nation and to the world.” He chastised Congress for refusing to pass his sweeping environmental legislative package, which has languished for months. “Since Congress is not acting as it should … as president, I’ll use my executive powers to combat the climate crisis,” Biden said, announcing he would detail his executive actions “in the coming days.” But he stopped short of declaring a “national emergency” over environmental concerns, as many in his party had called on him to do.

On Wednesday nine senators, including Elizabeth Warren (D-Mass.) and Bernie Sanders (I-Vt.), asked the president to declare a national “climate emergency to unlock the broad powers of the National Emergency Act.” That law would allow the Biden administration to “rapidly develop a bold array of rules” to impose on private industry, they said.

Proponents say declaring a state of emergency — and perhaps stretching the laws on the books a bit beyond their recognized authority — might let President Biden bar all imports and exports of fossil fuels (oil, gasoline, and liquefied natural gas [LNG]), end offshore drilling, and prohibit investment in overseas energy projects. Or he could shorten or eliminate the 30-day public comment period on federal regulations, unshackling the bureaucracy from public opinion.

The progressive wing of the Democratic Party has increasingly called on Biden to enact top-federal executive orders and executive actions as a substitute for passing legislation. Rep. Judy Chu (D-Calif.), whose bill to strike down nearly all regulations of the abortion industry seems destined to stall in the Senate, has called on Biden to declare “a public health emergency” for abortion. One day before the Supreme Court’s decision, members of the Congressional Black Caucus pleaded with the president Biden to “use every tool at your disposal to protect” abortion-on-demand, “including by declaring a public health and national emergency.”

The 1976 National Emergencies Act codified the president’s ability to declare a national emergency. When the president makes this unilateral declaration, he gives himself 123 new statutory powers. “Emer­gency powers cover almost every imagin­able subject area, includ­ing the milit­ary, land use, public health, trade, federal pay sched­ules, agri­cul­ture, trans­port­a­tion, commu­nic­a­tions, and crim­inal law,” according to the Brennan Center. The president would gain only 13 additional powers if Congress made the emergency declaration.

Roughly three dozen of the 75 national emergencies declared under the NEA remain in effect today, including the very first such emergency decree promulgated by President Jimmy Carter in 1979.

“Obviously, something that began with good intentions has gotten way out of whack,” Andy McCarthy, a former U.S. attorney and a contributing editor at National Review, told “Washington Watch with Tony Perkins” on Wednesday. He said Congress had steadily ceded its constitutional duties and prerogatives to the executive branch, allowing the president — and nameless, faceless federal regulators — to take the heat.

Congressmen “seem to think more and more that their job is to abdicate their authority or delegate it, and then go on cable TV and complain how bad things are,” McCarthy told Perkins. “They’re elected to be accountable, and then being accountable is the last thing they want.”

But unitary power may well be what the president wants. McCarthy noted that the Supreme Court ended its term by limiting an environmental overreach from the Biden administration.

Biden tried and failed to pass legislation to curb fossil fuels through the budget reconciliation process, which requires only a majority of votes, but Senator Joe Manchin (D-W.V.) refused to sign on. That left the president without the unanimous support of his own party — and unable to achieve another piece of his legislative agenda. Forecasters expect the 2022 midterm elections to heavily favor Republicans, potentially by historic margins, diminishing the odds of Biden attaining another legislative victory during his first term. “If I were the president, I would be asking my staff for a list of all of my authorities,” confessed Senator Martin Heinrich (D-N.M.).

The president’s critics say, in addition to being unconstitutional, the actions forecast by the administration’s allies would also be bad policy, for the U.S. and its global allies. Artificially constricting global oil and gasoline markets to bolster renewable energy would leave Americans paying even higher prices at the pump.

“We have massive reserves of gas because of the shale revolution. We’re just going to say, ‘Let’s use more expensive forms of energy while we have these massive reserves?’ It doesn’t make any sense,” Myron Ebell, the director of the Competitive Enterprise Institute’s Center for Energy and Environment, told Perkins. Biden is “playing to his base and he’s against the interests of the American people, which are for affordable and abundant energy, not climate policies that make energy more expensive and Americans poorer.”

Similarly, denying Europe the ability to buy U.S. fossil fuels after it severed ties with Russian oil and natural gas would hit our allies hard while they suffer from an historic heatwave. “Closing off U.S. LNG exports in today’s geoeconomic context would be pure insanity,” Leslie Palti-Guzman of Gas Vista told Politico. “It would propel Europe into a recession, amplify its political challenges, worsen its energy crisis and hand a victory to Russia.”

Should Biden declare a national emergency, it can only be reversed by the president or an act of Congress. The good news is “there are many men and women in Congress who are frustrated [because] they want to take on these issues,” said Family Research Council President Tony Perkins. That’s “all the more reason we need to be praying for them. And pray for more of them.”