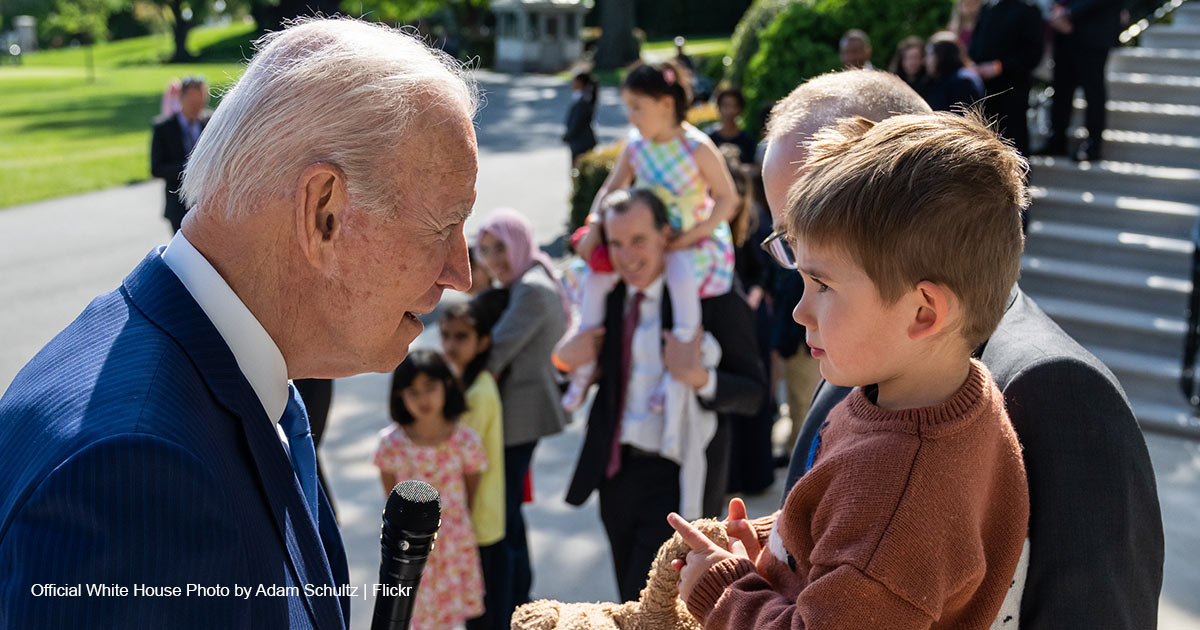 “It’s wrong” to protect minors from using puberty-blockers or undergoing life-altering surgeries “as a moral question and as a legal question. … No state should be able to do that,” said Biden during an interview with a man who identifies as female, which streamed online last weekend. “The trans part’s not immoral; what they're trying to do to trans persons is immoral,” he clarified.

“What is immoral is the president placing parents and their vulnerable children in the crosshairs of activists by advancing this dangerous LGBT narrative and attempting to foreclose avenues of real help for those struggling with same-sex attraction and gender dysphoria,” Mary Beth Waddell, director of Federal Affairs at Family Research Council, told The Washington Stand.

Biden’s views clash with the vast majority of voters; 79% of Americans believe minors should not be allowed to use cross-sex hormones or undergo surgical procedures based on their gender identity, a new Trafalgar poll found. Biden’s comments also came as the U.K.’s National Health Service banned the use of puberty blockers and transgender surgeries for anyone under the age of 18 out of concern that underage patients may be going through a “transient phase.” Studies have long shown nearly nine out of 10 children who struggle with gender dysphoria embrace their biological sex by adulthood. The NHS said a “watchful” approach would minimize the lifelong damage wrought by so-called “gender-affirming care.”

Detransitioners say the process to gender transition needs far greater legal and public scrutiny. “I literally lost organs,” said Chloe Cole, who had a double mastectomy at age 15 before accepting her birth sex less than a year later. “No child should have to experience what I have.” Similarly, Walt Heyer wrote his book, “TransLife Survivor,” for “others to catch a glimpse of the raw emotions and experiences of people who are harmed by the grand — and dangerous — experiment of cross-sex hormones and surgical affirmation procedures.” At its annual Pray Vote Stand summit last month, FRC hosted the CHANGED Movement, a grassroots organization of individuals who left the LGBT lifestyle to find spiritual freedom, joy, and healthy lives. “Many of these individuals did so via various forms of therapy, all of which the president would see made illegal,” Waddell told TWS.

‘Not in Communion with the Catholic Faith’

President Biden, who describes his opponents as immoral nearly as often as he calls himself a “devout” Roman Catholic, contradicts his faith’s moral doctrines on gender identity. The Catechism of the Catholic Church teaches that “directly intended amputations, mutilations, and sterilizations performed on innocent persons are against the moral law,” and that “everyone, man and woman, should acknowledge and accept his sexual identity.” Yet the president has repeatedly implied that God designed people’s inclination to reject their God-given biology. Biden’s comments represent an “abject failure of catechesis,” commented Andrew T. Walker, managing editor of World magazine’s opinion section and a Christian ethics professor at a Southern Baptist seminary. “Misunderstanding church teaching is one thing; but praising that which is unjust is just a whole different level.”

“Mr. Biden is not in communion with the Catholic faith,” said Most Rev. Charles Chaput, the archbishop of Philadelphia, on Saturday concerning the second Catholic president’s views on social issues, particularly abortion. “And any priest who now provides Communion to the president participates in his hypocrisy.”

Conversion for Gender, But Not Sexual Orientation?

While Biden claims critics are wrong to prevent minors from attempting to change their gender, he has attempted to ban Americans of all ages from receiving counseling about unwanted sexual attraction. This June, in the middle of Pride Month, he signed an executive order to “reduce the risk of youth exposure to” reparative therapy (which its detractors call “conversion therapy”). The White House called the practice “harmful,” ordered the Federal Trade Commission to investigate whether it should be considered a “deceptive” practice, and ordered the United States Agency for International Development to “develop an action plan to promote an end to its use around the world.”

The White House did not say how trying to eradicate the use of counseling worldwide dovetailed with its claim to support patient autonomy.

“Everyone has the right to walk away from sexual practices and experiences that don’t work for them, and to have support to do so,” Dr. Joseph Nicolosi Jr., a licensed, clinical psychologist, told The Washington Stand. His late father pioneered reparative therapy; the younger Nicolosi now practices the slightly different reintegrative therapy at the Breakthrough Clinic. “In a client-therapist relationship, the client’s in the driver’s seat. They set their own goals, which the therapist helps them achieve. I meet people where they’re at and help them resolve the issues that are causing them conflict, affirm them in their journey, and help them achieve their goals.”

Yet the Biden administration calls these forms of psychological or behavioral therapy harmful, while lauding irreversible surgery. “This has nothing to do [with] caring for individuals. This is all about a political agenda,” said Family Research Council President Tony Perkins on Monday’s “Washington Watch.”

David Reaboi, a 2012 Lincoln fellow at the Claremont Institute, called Biden’s answer “a far lower moment for the United States morally and spiritually than the botched withdrawal in Afghanistan. It’s hard — probably impossible — to make sense of this without religion.”