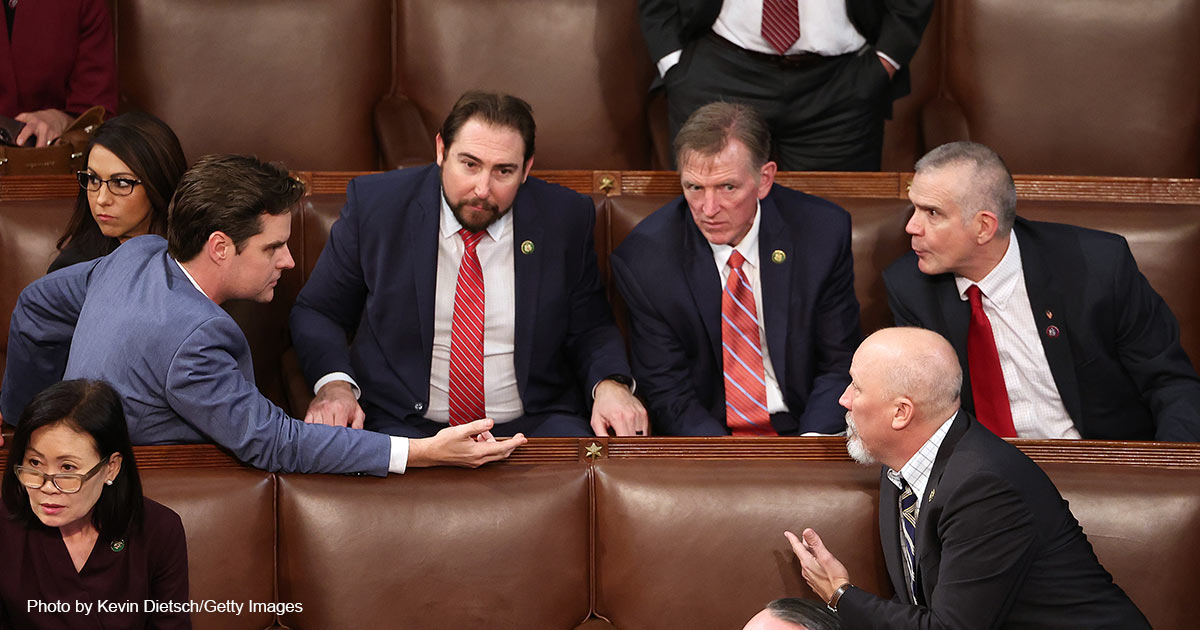 While the chaos over the next House speaker roared into its third day, the band of conservative holdouts have managed to accomplish one thing: exposing the flaws they believe are destroying the current system. Rep. Chip Roy (R-Texas), who’s helped lead the counter-movement to former Minority Leader Kevin McCarthy (R-Calif.), insists the chamber is broken — and this is the best chance Republicans have to fix it.

On the House floor Tuesday, Roy insisted that the “only way” Americans are going to get an honest debate on everything from Ukraine spending to the border is “if you change the rules.” “Now, we’ve had a conversation for two months to try to advance the ball,” he said, “and we have had success in doing that. But we need to be able to guarantee that we’re going to be able to stand up in the face of the swamp that continues to step over the American people on a daily basis and spend money we don’t have.”

What does that sort of guarantee look like? Roy ticked off a number of specifics to Fox News’s Brit Hume. “I want to be able to have enough members on the Rules Committee so that we can block bad bills. That could be three — that could be four. And I want to make sure Republicans are the ones making sure that those bills get through the Rules Committee to the floor. And I want to be able to have the ability to make points of order on the floor if amendments aren’t going to be able to be relevant or germane, etc.”

Conservatives don’t have to look far in the rearview mirror to understand just how game-changing the lack of debate can be. In late December, Roy sat before the same Rules Committee pleading with Democrats to let him introduce a religious freedom amendment to the Democrats’ same-sex marriage bill — only to be told by then-Chairman James McGovern (D-Mass.) that he wouldn’t risk tanking the bill by holding an open discussion.

As for the global hysteria that this process is taking too long, Rep. Matt Rosendale (R-Mont.) shrugged. “The government is funded, and no one is losing sleep, I don’t think,” he told Family Research Council President Tony Perkins on “Washington Watch” Tuesday. “I would much rather take time and get a good speaker of the House that we can trust than to hurry up and get someone [who] does a terrible job.”

Perkins agreed, pointing out the historic nature of the delay. “I think it’s unprecedented,” he said. “… And a lot of people are wringing their hands. You know, the president today was asked about it and said, ‘Oh, this is embarrassing as the world watches.’ I don’t think so. I think this is the way our system is supposed to work.” He reiterated again, “I’m not against Kevin McCarthy. I worked with Kevin. He’s been on this program before. …It’s not about him. It’s about the process. And it’s about making this process work for the American people.”

Perkins pointed to Roy’s concerns and emphasized that “members need to come here and be able to represent their people by offering legislation and amendments on the floor. That’s not happened.” And what better time to make this course correction than now, Perkins asked? It may be “painful,” he admitted, but “the leverage is with the conservatives.”

Of course, not everyone believes McCarthy isn’t capable of the change conservatives demand. Roy’s Texas colleague, Rep. Pat Fallon (R), was on “Washington Watch” earlier in the week making the case for the Minority Leader’s promotion.

“[McCarthy] helped raise a whopping half billion dollars for Republican candidates [in the midterms],” Fallon said. “… We have dramatically improved the House rules [such as] no bill will be considered for 72 hours once it is posted, so you have 72 hours to read the bill. We have decentralized control of the steering committee, which selects what committee the members get on. [Also], any five members in the GOP … [can do] a ‘no confidence’ vote for Speaker at any time. … So I don’t understand why we’re going through this.”

Asked what he and the other 20 conservatives want in a speaker, Rosendale replied, “Someone that we could trust to actually provide the rules that we had worked so hard to get in place. And unfortunately, that person is not Kevin McCarthy. We gave him ample opportunity over the last two years to demonstrate leadership skills.”

Frankly, the Montana Republican said, “We’ve had more debate and discussion on the House floor over the last two days … than we’ve had over the last two years.” Before he arrived in Congress two years ago, Rosendale explained, the House had eliminated regular order. “And so, there has not been any true discussion, debate, or collaboration that has taken place on the floor.” Conservatives tried to address these problems last summer — to no avail. “This is exactly what many of us were trying to restore as we put together a list of amendments that needed to be placed on the rules that govern how the floor operates and brought that to Kevin last summer. And we wanted to have this discussion back then.” But he wasn’t interested, Rosendale explained.

Conservatives want leaders who will put up a fight, he argued. “[McCarthy’s] been part of a leadership team for the last 10 years now that has basically managed the demise of our country. He voted with the Democrats on legislation to pass budgeting and spending bills in 2015, 2017, 2018, and 2019. And when they passed that legislation, and he was playing a leadership role to increase all of this spending, there [weren’t] 20 or 30 Republicans that voted against those provisions. It was like 100 to 120 Republicans have voted against each one of those provisions.”

He pointed to the National Defense Authorization Act, the infrastructure bill, and the budget-busting continuing resolutions. “And each one of those opportunities gave him a chance to place some common-sense reforms on each one of those pieces of legislation — whether it was eliminating vaccination mandates or eliminating new Green Deal provisions. And he failed miserably and ended up negotiating with Democrats to pass legislation.”

At the end of the day, Roy insisted, the status quo isn’t what conservative voters want. “This country needs leadership that does not reflect this city. … And the argument that I would make is that they want a new face, new vision, new leadership.”