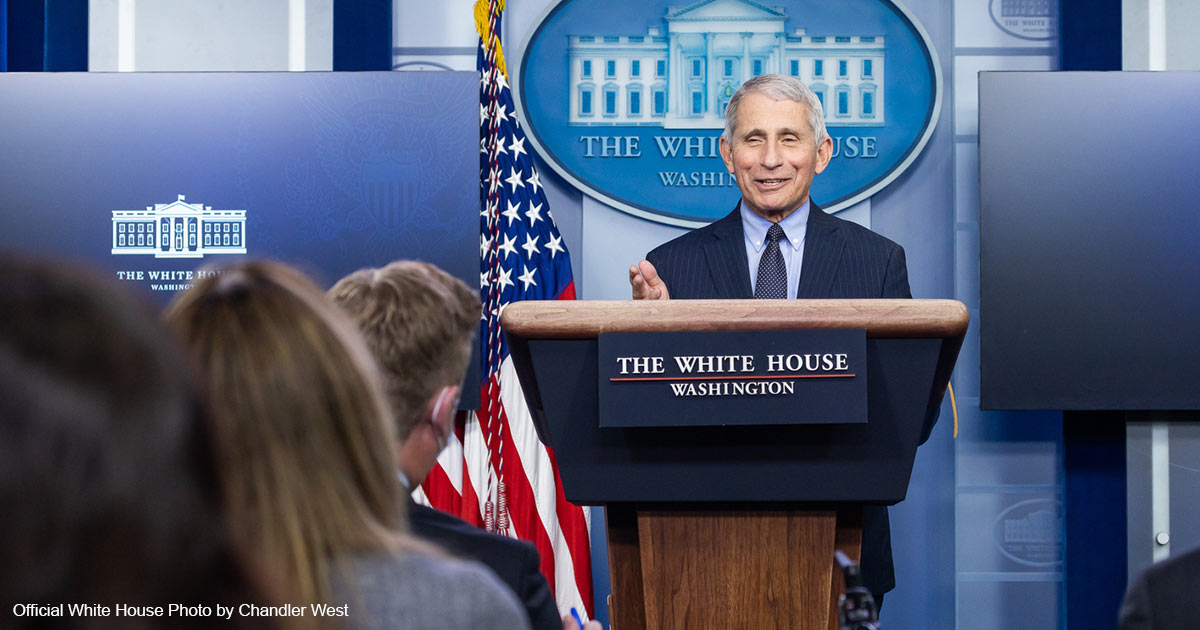 Shortly after Dr. Anthony Fauci gave his final public statement as a government official, one of the doctors Fauci tried to drive from public view gave his own assessment of Fauci’s tenure: “His advice turned out very badly,” said Dr. Jay Bhattacharya, a Stanford University professor of medicine and co-author of the Great Barrington Declaration. In his career overall, “He has not succeeded.”

Although Fauci formally steps down as director of the National Institute of Allergy Infectious Disease (NIAID) at the end of the year, the White House feted Fauci as the retiring voice of public health during a sometimes-contentious press conference Tuesday afternoon. “For close to four decades, and under seven Republican and Democratic presidents, Dr. Fauci has always led with the science. And our country is stronger and healthier because of his leadership,” asserted White House spokesperson Karine Jean-Pierre. As he bowed off the stage, Fauci promised to comply with House Republicans’ forthcoming investigations, stating, “We can defend, and explain, and stand by everything that we said. I have nothing to hide.”

Yet Jean-Pierre refused to let a reporter ask Fauci a question about the origins of COVID-19 during the conference, saying the reporter violated the “process.”

“He owes the American people an answer to questions about his management of the pandemic,” he continued. “The interventions that he’s put forward — the lockdowns, the school closures, the vaccine mandates — have created tremendous distrust in public health, have not protected vulnerable people from COVID, and have caused tremendous harm to the life prospects of children, for the poor, the vulnerable, the working class.” This fall, 34% of eighth grade students tested proficient in math and reading, respectively, according to a review of National Assessment of Educational Progress (NAEP) scores — a decline even the National Education Association ascribes to COVID-related learning loss.

Fauci waved off such reports in August, saying no American had been “irreparably damaged” by the lockdowns he advised. Last month Fauci eschewed responsibility, stating that he “had nothing to do” with school closures.

Yet on March 12, 2020, Fauci said, “The one thing I do advise — and I’ve said this in multiple hearings and multiple briefings — that right now we have to start implementing both containment and mitigation. And what was done when you close the schools, is mitigation.”

“His advice has turned out very badly,” assessed Dr. Bhattacharya. “And I think that will mark his reputation forever.”

The credibility issue extends to the efficacy of COVID-19 shots and boosters, which Fauci denied saying, although he led a chorus of public pressure and vaccine disinformation:

The CDC’s most recent statement, updated on June 23, says simply: “People who get vaccine breakthrough infections can spread COVID-19 to other people.” Fauci would confess this summer that “vaccines, because of the high degree of transmissibility of this virus, don’t protect overly well, as it were, against infection.”

“I think the vaccines were oversold,” replied Dr. Bhattacharya. “The science did not show at the time that the vaccines would stop transmission.”

“Even if you got the vaccine, you could get COVID, and they did. And people saw that. And I think that the trust in public health is at an all-time low,” he added.

Fauci also admitted moving the goalposts on what constitutes “herd immunity” in December 2020. “When polls said only about half of all Americans would take a vaccine, I was saying herd immunity would take 70 to 75%” of American residents taking the shot, Fauci told The Times. “Then, when newer surveys said 60% or more would take it, I thought, ‘I can nudge this up a bit,’ so I went to 80, 85.”

In his final statement, Fauci still attempted to sell COVID as a pandemic of the unvaccinated. “The real danger isn’t the people who have not been vaccinated. So that’s where we expect, if we’re going to see a problem this winter, it’s going to be among those people,” he said.

“That’s a vast overstatement based on no evidence,” retorted Dr. Bhattacharya. “For the vast majority of people, unvaccinated or vaccinated, they’re protected by dint of immunity from COVID, based on COVID recovery.” The omicron variant generally produces a more mild illness in those infected, he added.

Still, Fauci left office as he held it: Proselytizing with the single-minded goal of convincing Americans to receive the COVID-19 shot. “The final message I give you from this podium is that please, for your own safety, for that of your family, get your updated COVID-19 shot as soon as you’re eligible to protect yourself, your family, and your community,” Fauci closed. Only 10% of Americans have opted to receive the bivalent booster against COVID-19 and the mild omicron variant as of November 9, according to the Kaiser Family Foundation.

That problem will recede as Americans put Fauci’s failures into perspective — such as his multiple flip-flops on wearing masks with no change in the underlying science. “I think there may be a very small minority of people who continue to wear masks. But for the vast majority of the population, five years from now, it’ll be a bad memory,” Dr. Bhattacharya predicted. “We moralized the wearing of a mask. I think five years from now, we’re going to look back on that as a black moment in public health, a dark moment in public health, where we overstated the evidence about the efficacy of this intervention and then allowed it to be politicized and moralized.” That process further “diminished the authority” and trust in public health.

The doctor said Fauci should answer at least the following questions about his tenure as top COVID adviser to two presidents:

Why did he recommend lockdowns? Did he actually think that lockdowns worked?

Did why did he recommend school closures? Was he aware of the harms done to children as a consequence of it?

Why did he recommend vaccine mandates? Was he aware at the time that the vaccine didn’t stop transmission?

Who really needs to be boosted?

Will N95 masks at scale work to protect vulnerable people?

To call Fauci averse to criticism understates the problem. That came to a head in June 2021, when Fauci asserted that anyone who criticized him actually attacked science. After Fauci’s exit, “I don’t think I want anybody to fill the role of science itself,” Dr. Bhattacharya said. “There is no high pope of science.”

Throughout the pandemic, Fauci “made statements at odds with the evidence from on high and expected everyone to go along with him. And distressingly, very large parts of public health have done exactly that,” Dr. Bhattacharya said.

That habit extends throughout Fauci’s career in public health, which began in 1984. During the AIDS crisis, Fauci speculated on camera that the deadly HIV virus may be transmitted by “household contact,” or “just the ordinary close contact that one sees in normal interpersonal relations.” Men having sex with other men accounted for 71% of all new HIV infections in 2020, sexual contact accounted for 93% new cases, and intravenous drug use accounted for the remaining 7%, according to CDC statistics.

“He has not succeeded” in his 38-year public health career, Dr. Bhattacharya concluded.

Fauci retires as the highest-paid employee in the federal government. He earned $456,028 in salary in 2021 in addition to receiving an impressive suite of benefits — a $38,420 raise or 9% increase over his prepandemic income, according to the government watchdog OpenTheBooks.com.

The final word on Fauci’s success or failure will be given “by people who are harmed, especially the poor, by the vulnerable and children who are harmed by the advice that he gave,” said Dr. Bhattacharya.

National leaders have a much greater need for humility going forward, he added. For instance, President Joe Biden has threatened to veto a Senate measure, introduced by Senator Roger Marshall (R-Kan.), to end the COVID-19 national emergency under the National Emergencies Act. The bill, which passed the Senate by a bipartisan vote of 62-36 on November 15 — nearly two months after President Joe Biden declared “the pandemic is over” — still needs House approval. Biden “does not need emergency powers. Any powers that he’s currently using for the COVID emergency would better be handled by normal democratic processes,” replied Bhattacharya. “He is not a king. He’s a president. He should act like one.”

Bhattacharya expressed the hope of millions that, after Fauci’s exit, government health decrees — and daily life — could return to normal.

“Unless you are deeply immunocompromised,” or “you somehow managed to avoid getting COVID up to now, I tell almost everybody else: Live your life,” said Dr. Bhattacharya. “It’s far past time to stop thinking that the avoidance of a single infectious disease is the sole purpose of your life. You’re hurting yourself if you hide yourself away from your grandkids, your children, your interactions with others.”