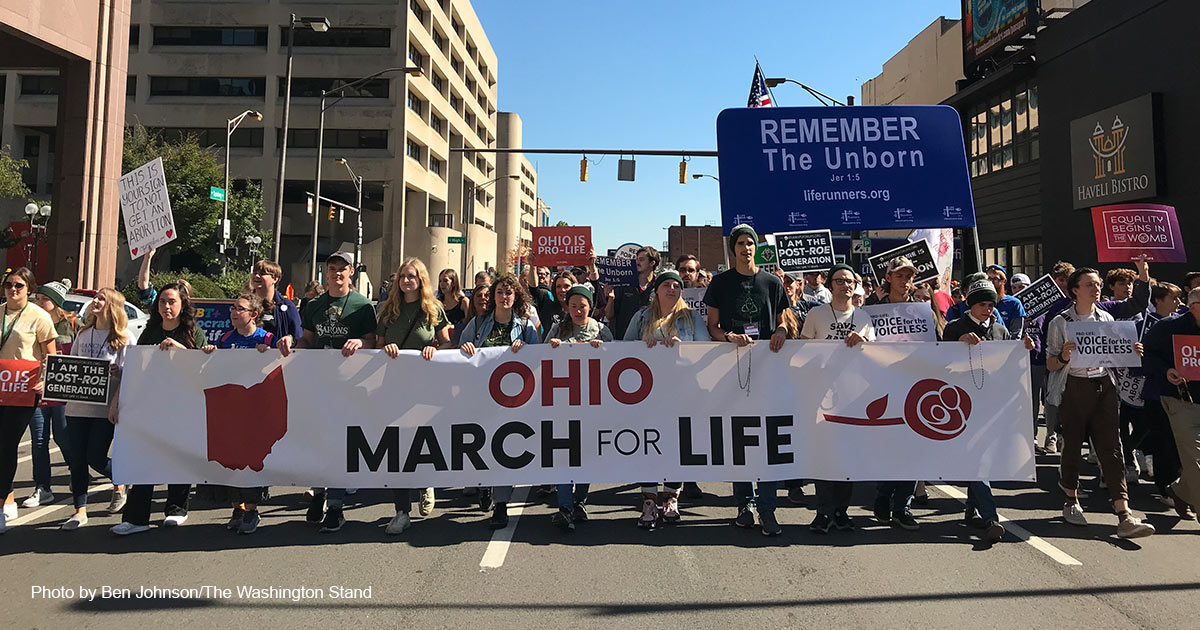 It was a March for Life like no other: For one thing, it took place on a beautiful fall afternoon. For another, it took place outside Washington, D.C., in the quintessential middle American city of Columbus, Ohio.

Thousands of people from every corner of the Buckeye state stood outside the statehouse before pouring into the streets of the state capital Wednesday for the first-ever Ohio March for Life.

“What a beautiful day!” exclaimed many, who contrasted the weather with the frequently subzero conditions in Washington at the national march, which takes place near the January anniversary of the now-overturned Roe v. Wade decision.

But if the weather differed, the message remained the same: The pro-life movement must be “rooted and grounded in love” for every person: born or unborn, pro-life or post-abortive — and those in the abortion industry whose consciences gnaw at them as they commit the chief sin of their industry thousands of times over their careers. And that love must manifest itself in legally protecting all life from the moment of conception, making abortion unthinkable, and empowering women who choose to give their children life.

“The fight here in Ohio is just beginning,” said 28-year-old State Rep. Jena Powell (R-Arcanum). She noted that science proves that “life does not just begin at the time the heartbeat is detected. Life begins at conception.”

“Although we have moved the mountain and overturned Roe v. Wade, we still have so much work to do,” said Aaron Baer, president of the Center for Christian Virtue, a state affiliate of the Family Research Council and a cosponsor of the Ohio March. “If we really want to see an end to abortion, to see women protected and unborn children saved, we can’t stop now. First, we need to ensure Ohio prohibits abortion at the very point of conception.”

In 2019, Ohio enacted a law protecting life from the moment doctors can detect a fetal heartbeat, which took effect shortly after the Supreme Court overturned Roe v. Wade in June. But abortion is currently legal in the state until 20 weeks, since Hamilton County Court Common Pleas Court Judge Christian Jenkins issued a temporary restraining order against the law, which he extended last week.

“We need to pass legislation this year to end all abortion in Ohio,” insisted Peter Range, the executive director of Ohio Right to Life. ”And make no mistake, we will get it done.” Jeanne Mancini, president of the national March for Life, also said the state needs a law protecting “life from conception” forward — but all the speakers agreed that laws will never go far enough to create a culture of life.

“Passing legislation is actually the easy part,” said Baer. “If we want to purge abortion from society, we must get to the root cause. We have to transform the way we see sex and family and each other,” he said. “We have to purge the lies that tell women [they] are not strong enough to raise a child. I believe in women much more than that. We have to purge the lie that too many young men believe, that women are objects to be used and abused, instead of honored and respected.”

“First and foremost,” the pro-life movement “must be rooted and grounded in love,” said Range. We must “focus on the family,” since “86% of women procuring abortions are single. We need moms and dads together saying yes to life.”

Range shared two personal reflections of praying with those affected by the trauma of abortion. Years earlier, when a woman in his college revealed her post-abortion experience, “I was able to share God’s love with her and tell her that there is no sin so deep that God’s love is not deeper still.” That call to love deepened years later, when an abortionist in Toledo asked him for prayer. Holding the hands which had committed thousands of abortions, Range felt God impelling him to recognize the dignity of all life and God’s merciful forgiveness for all His people — including that of the abortionist. “Can we love the abortion doctors and nurses just as much as we love the moms and dads in need?”

“Will you lead with love? Will you love heroically? Will you win this battle with love?” Mancini challenged those gathered outside the statehouse. “Because that is what the pro-life movement is about: It is about love. And sadly, we have seen the media misportray this in the past few weeks and months.” The media amplified claims by politicians such as Senator Elizabeth Warren (D-Mass.), who told expectant mothers that the largely volunteer staff of pregnancy resource centers “mean them harm” and are guilty of torture.

Attendees at the first-of-its-kind march embraced the message of grace and legal protections wholeheartedly. “We want to show as much love as possible, because we love the women who have given birth, the women who have had abortions,” Christiana Archer, the 22-year-old volunteer and event coordinator at Dayton Right to Life, told The Washington Stand. “We love them all, and we want them to know there is healing, there is love, and choosing life for their child is the best option.”

Pro-life advocates had the opportunity to love the opposition on Wednesday, as one lonely, pro-abortion protester appeared, banging a drum in an effort to interrupt the proceedings. The tactic backfired, as the emcee likened the drumbeat to an unborn child’s heartbeat. Police seemed to ask the woman, who appeared to be in late middle age, to leave after she persisted in beating the drum. (The sound cannot be heard in a video recording of the event.)

Many of the thousands who came to the state capital in the middle of a workday marched for very personal reasons. Jamie Sheridan, 22, told The Washington Stand she became involved in the pro-life cause because of a close friend she met in college. “He was conceived in rape. His mother was 19 years old, and she courageously chose life. He went through the foster system and had a really rough upbringing.” The young man, who is now 24, loves his life and serves his community as a volunteer fireman. Yet the abortion industry said he had “every reason to be killed” through abortion, Sheridan told TWS. “He’s a minority; he’s black. His mom conceived in rape — all the justifications they were using to eliminate his life,” she said. “I just saw that as such a great injustice, and I felt I had to stand up for him.”

Sheridan brought “at least 200” college and high school students to Columbus Wednesday, as Ohio regional coordinator for Students for Life of America. Yet her contingent represented a small portion of the marchers, who ranged all ages and backgrounds.

Perhaps the most captivating testimony came from a young child who was nearly aborted. After Ruth Cabrera-Henriquez shared her story of resisting physicians’ pressure to have an abortion, the crowd heard from her son, Victor. “When I was in my mommy’s tummy, the doctors wanted her to get an abortion because of the complications, but my mommy didn’t want to. So, she went to the pregnancy care center for help, and they helped her.”

“I love my life!” Victor said to cheers.

Mancini encouraged everyone in the crowd to share their testimonies with their circle of friends. “Your stories will change people’s hearts,” Mancini said.

She also urged them to sign up for legislative alerts and contact their lawmakers, including the dozens of state legislators who stood on the stage.

“It’s not always our battle. It’s God’s battle, but He needs our hands and feet,” said Margie Christie, executive director of Dayton Right to Life. “God needs our voices to share His truth and His hope, and His love with these moms and dads. And God needs us to witness to the folks in Columbus, to the abortionists, to their staffs, to their volunteers, everyone — sometimes even our own families.”

Legislators need to know that, as a God-given and inalienable right, “life is not something that Columbus or Washington, D.C., negotiates,” said Christie. “Every life, born and unborn, has a God-given right to grow and live out that destiny.”

And all people need to know that “Love is what makes us tick,” said Dr. David C. Forbes Jr. of the Columbus Christian Center, as he offered the benediction. “Love is undefeatable.”