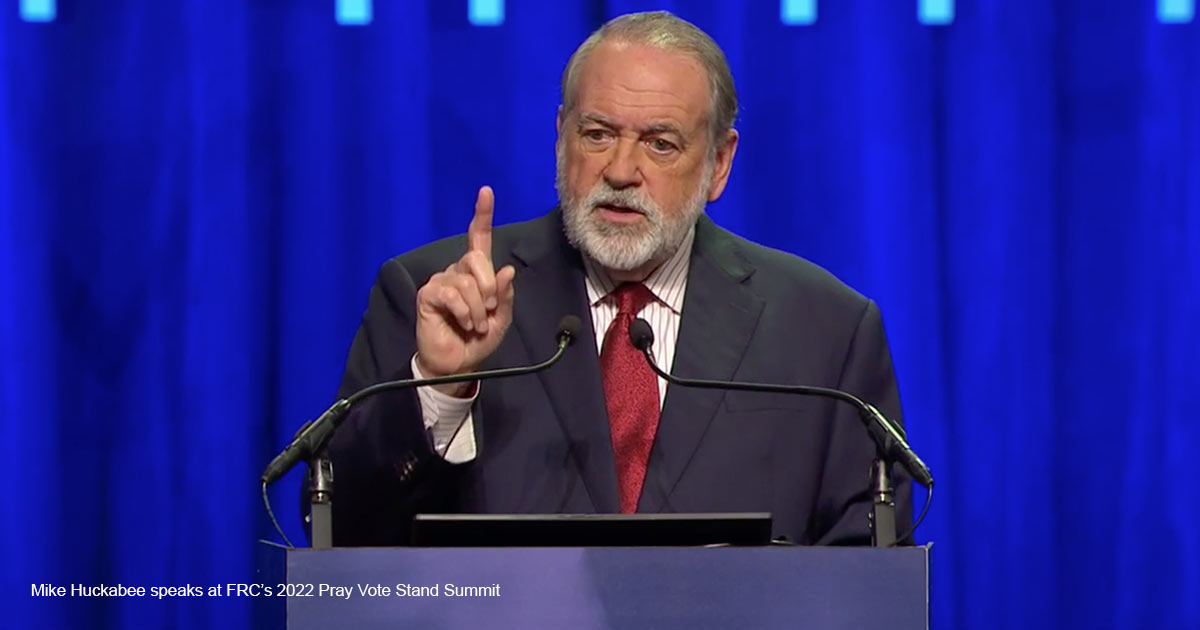 Mike Huckabee: The 2022 Midterms Will Come Down to These 3 Issues

As polls show Democrats threatening to dam up the GOP’s big red wave, former Arkansas governor and two-time presidential candidate Mike Huckabee revealed the three issues that he thinks will chart the path to his fellow Republicans’ victory in November — including a firm commitment to life.

“Keep it simple: This is all about gasoline, groceries, and God,” Huckabee told Fox News host Sean Hannity on Monday night. “Remind them how much they’re paying for gas since Joe Biden has taken office, how much they pay in groceries — how hard it is to put food on the table.” Finally, he counseled, “Don’t apologize on the life issue.”

Many Republican candidates have emphasized economic issues, where they enjoy a 14-point lead over Democrats, while shying away from abortion in post-Dobbs America. Gasoline prices began an inexorable rise under President Joe Biden, spiking at $4.49 a gallon the week of May 16, according to the U.S. Energy Information Administration. While prices have fallen since Biden began depleting the Strategic Petroleum Reserve last fall, gasoline still costs $3.65 a gallon — $1.28 higher than the $2.37 consumers paid per gallon when Biden took office after vowing, “I guarantee you we’re going to end fossil fuels.”

Similarly, high inflation has lifted grocery prices to highs not seen since the Carter-era “misery index.” In August, the cost of food at home “rose 13.5% over the last 12 months, the largest 12-month increase since the period ending March 1979,” reported the Bureau for Labor Statistics. Biden tried to downplay the issue on “60 Minutes” Sunday, saying month-to-month inflation has risen “just an inch, hardly at all.”

“If you drill down on some of these inflation numbers, the base numbers are really, really bad: groceries, eggs, fuel, all these type of things that families rely upon,” Rep. Greg Steube (R-Fla.) told “Washington Watch with Tony Perkins” on Monday. “You’re starting to now get warnings about fuel prices in the wintertime as people are going to start to use gas and natural gas to heat their home.”

While Republicans have eagerly campaigned on economic issues, Democrats have pivoted to attacking their opponents as pro-life extremists. Democrats have spent $124 million this year on abortion-related ads, according to an analysis from the Associated Press — 20 times as much as they spent during the 2018 midterms.

The Democratic Party has seized on a “national abortion ban” — the “Protecting Pain-Capable Unborn Children from Late-Term Abortions” act introduced by Senator Lindsey Graham (R-S.C.) last week. The bill would protect unborn babies from abortions carried out 15 weeks after fertilization, with exceptions for rape, incest, and to protect the life of the mother. Several Republicans, including Senator Mike Rounds (R-S.D.) and the retiring Senator Rob Portman (R-Ohio), have opposed the bill, which resembles similar legislation that both men voted for in recent years.

“To those who suggest that being pro-life is losing politics, I reject that,” Graham told “Fox News Sunday” this week. Nearly three out of every four Americans (72%) support limiting abortion to the first 15 weeks of pregnancy — including 60% of Democrats, 70% of registered independents, and 75% of women, according to a Harvard/Harris poll. Only 10% of Americans favor abortion through all nine months of pregnancy, the position endorsed by the 2020 Democratic Party platform and codified by the “Women’s Health Protection” Act, which the Democrat-controlled House of Representatives passed in July.

Republican office-seekers must respond to Democratic attacks or risk allowing their political opponents to define them, said Graham. “When you ask about abortion, the answer can’t be, ‘I’d like to lower inflation.’ Give a logical answer,” Graham added.

Far from extreme, some pro-life advocates believe the bill is far too lenient. It would prevent only 4% of all abortions and contains exceptions for rape and incest: 94% of all abortions take place before 15 weeks, 1% are due to rape, and another 1% to incest. At a minimum, that broadly popular bill falls within the mainstream of American opinion.

“Some of us believe life is precious,” Huckabee continued. When Democrats accuse Republicans of being extremists, aspiring candidates should “take it right back to the Democrats and say, ‘You may think that we protect life too much, but tell us at what point is it okay to take the baby’s life?’”

Despite politically fraught rhetoric about threats to democracy, voters do not believe America has lapsed into extremism, Huckabee told the Pray Vote Stand Summit last Wednesday. “The reason we have the influx on the southern border is because people are lined up to get into America. Can you show me where the line is, where people are just dying to get out?” he asked.

The winning path is to focus on three issues vital to the vast majority of Americans, he summarized on Monday: “Keep it simple: gas, groceries, God.”