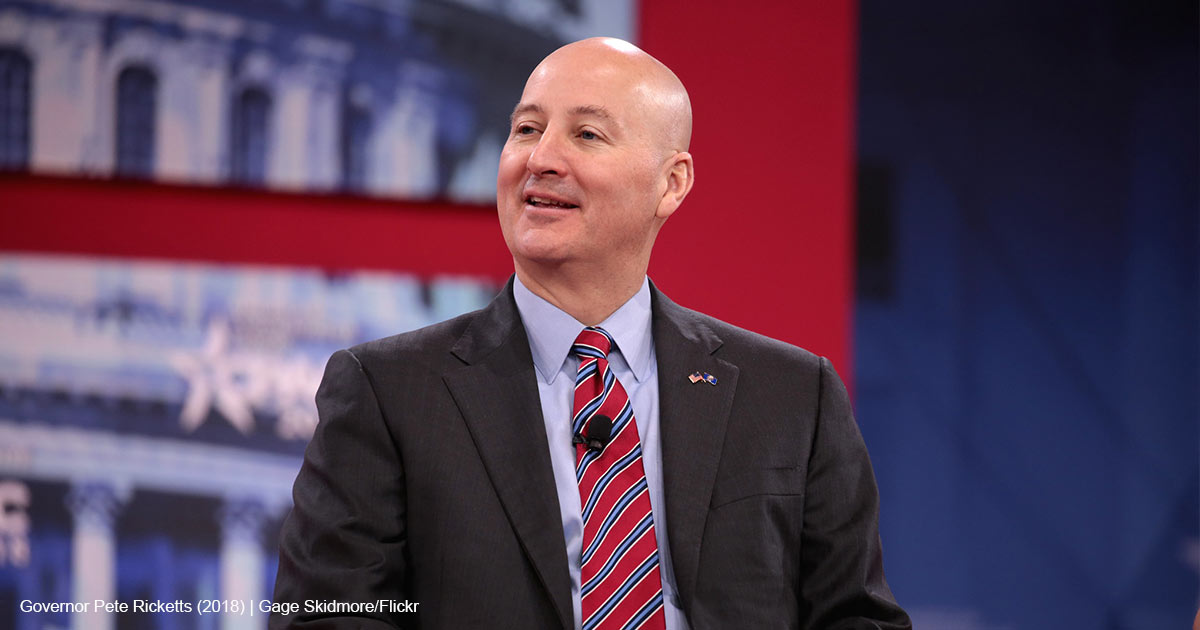 Although the midterm elections are long over, the U.S. Senate has a new pro-life, pro-family Republican: Former Nebraska Governor Pete Ricketts will take the seat formerly held by Ben Sasse (R), who resigned from the chamber this week.

Pro-life advocates nationwide celebrated the appointment. “Pete Ricketts has proven himself as a pro-life champion, and we look forward to working with him in his new role,” said SBA Pro-life America in a statement. “Fantastic news,” exclaimed Senator Ted Cruz (R-Texas), who noted he’s “looking forward to working with my friend.” Both former Vice President Mike Pence and Senator Tim Scott (R-S.C.) predicted Ricketts will continue to fight for “conservative values in the U.S. Senate!”

Ricketts served as governor from 2015 until 2023, winning two gubernatorial elections by lopsided margins before being forced to leave office this month due to term limits. As Ricketts signed bills protecting unborn babies from gruesome dismemberment abortions in 2020, defunding Planned Parenthood from the state budget in 2018, and requiring women give informed consent to abortion by knowing the facts of fetal development. That 2017 law also requires abortionists to tell abortion-minded women that it is possible to reverse a medication abortion after taking mifepristone.

The future senator has vocally referenced his Christian faith while supporting the scientific truth that life begins at fertilization. “I ask you to join me in praying for the end of abortion in the United States,” Ricketts asked his constituents. He also appealed for pro-life Nebraskans to “consider volunteering your time or resources to help the expectant parents and young families in your community” at a pro-life pregnancy resource center. “Let’s rally around our moms and dads to provide them with a strong network of support on the journey of parenthood.”

He supports bills that would save the lives of all unborn babies, including those conceived by rape or incest. “Protecting the dignity of life has been, is, and will remain a core value of what is means to be a Nebraskan,” he said in 2021.

After news leaked last May that the Supreme Court stood poised to overturn the Roe v. Wade decision, Ricketts chided congressional Democrats for trying to “force through radical abortion laws” such as the so-called “Women’s Health Protection” Act, “rivaling those of North Korea and China.”

“Nebraska is a pro-life state,” then-Governor Ricketts said. “If Roe is overturned, we will take every step we can to protect our pre-born babies.” He attempted to call a special legislative session this summer to lower the abortion limit from 20 weeks to 12 weeks but could not attract enough votes to overcome a Democratic filibuster. “I think it’s sad that we only have 30 senators who want to protect pre-born babies, especially given that this is a reasonable step,” lamented Ricketts in August.

Ricketts stood up for parental rights and childhood privacy, repeatedly clashing with public education administrators over their wish to incorporate far-Left material in the conservative state’s curriculum. He and concerned parents prevailed upon the state Department of Education to abandon virtually all its plans to introduce sexual orientation and gender identity (SOGI) into the state’s K-12 public school health classes. Ricketts opposed the 1619 Project, an historically dubious New York Times project that recycles Marxist theories that equate America’s founding with slavery. “The Nebraska Department of Education should respect that parents are the primary educators of their children,” said Ricketts in 2021.

Ricketts and 14 other Republican governors signed a letter critiquing the Biden administration’s attempts to withhold school lunch funds from districts that refused his “unscientific reinterpretation” of a decades-old law banning sexual discrimination to transgender people. Ricketts has formally recognized the importance of religious liberty.

The Nebraska governor also led the fight against legislative efforts to legalize marijuana in the Cornhusker state. “Expert medical research shows that marijuana is dangerous,” he said, noting that cannabis use causes or is associated with a host of mental, physical, social, and emotional harms.

He opposed mask mandates in 2021. However, the same year Ricketts testified before Congress that “I believe that employers have the ability to” enforce vaccinate mandates on their employees, “but I discourage it.”

The appointment will require Ricketts to run in a special election in 2024 and then face voters again in 2026 to win a full six-year term in his own right. Ricketts’s popularity was one of the reasons his successor chose him. “I don’t believe in placeholders,” said Nebraska Governor Jim Pillen (R), who noted he sought an appointee with a servant’s heart.

While conservatives rejoiced, the Nebraska Democratic Party derided Ricketts as an “anti-choice billionaire.“ Ricketts hails from a wealthy family: His father, Joe Ricketts, founded TD Ameritrade, and the family owns the Chicago Cubs. The governor worked at Ameritrade before running for U.S. Senate in 2006 and founding a conservative think tank.

Many on the Left, and a few Republicans, raised allegations of a quid pro quo, as Ricketts spent $1.375 million to elect Pillen over a Trump-endorsed primary opponent, Charles Herbster, in 2021. But Pillen said he tapped Ricketts for the position because of his track record at winning elections, and he believes a senator with seniority will be able to best serve the interests of his state. Senate Minority Leader Mitch McConnell (R-Ky.) had also publicly pushed for Ricketts to be named to the seat.

Ricketts’s appointment does not affect the balance of the Senate, where Democrats hold a 51-seat majority. The Nebraskan will succeed fellow Republican Senator Ben Sasse, who formally resigned this week to become president at the University of Florida. The ascension of Sasse, a social conservative, to the top academic post set off waves of protests among the university’s left-wing student body.

“Past performance is a pretty good indicator of future performance,” Pillen said. Pro-life advocates hope that’s true for his voting record, as well.