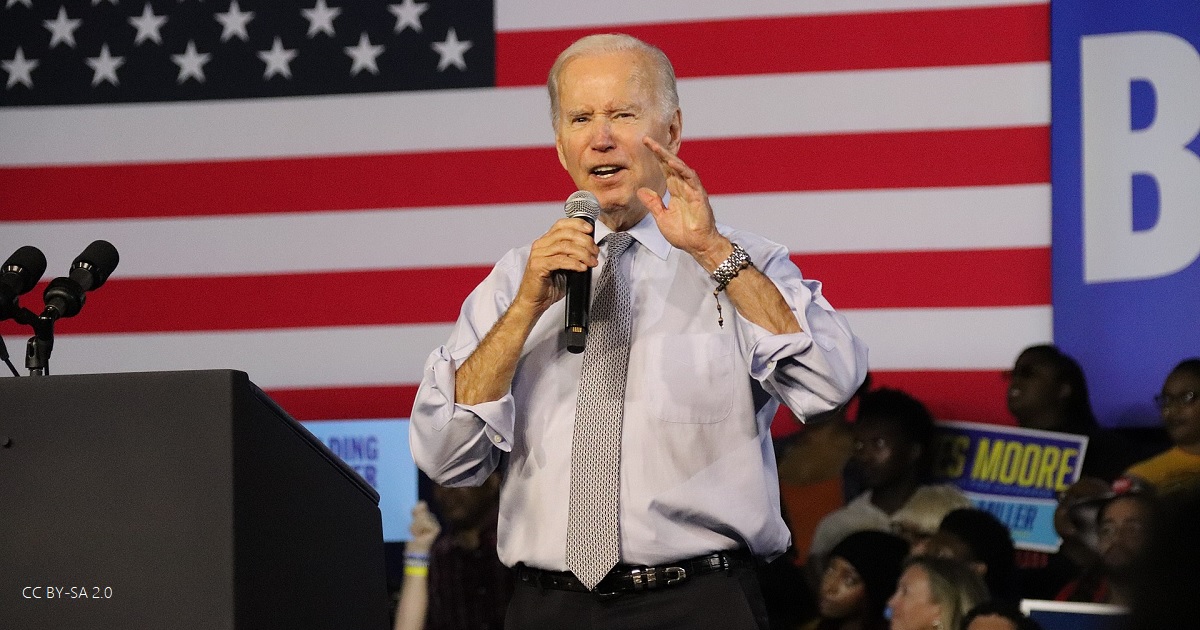 Mormons mixed with drag queens in a teeming crowd that came to celebrate President Joe Biden’s signing of the “Respect for Marriage” Act at an elaborate ceremony on the South Lawn of the White House on Tuesday. Democrats alternately praised a pedophile and yelled “praise God!” over the passage of the law that conservatives warn will hamper religious liberty and drive Christians from the public square. And, the president promised, they were just getting started.

Passing H.R. 8404, which opponents call the “Disrespect for Marriage” Act, “took a lot of faith,” said Senate Majority Leader Chuck Schumer (D-N.Y.). When the bill’s sponsors asked him to delay the vote until after the midterm elections to help Republican supporters, “I took a risk. I put my faith in the better angels of human nature and — praise God! — we succeeded.”

Schumer was far from the only speaker to praise the divinity in a “celebratory event” suffused with religious language. Speaker of the House Nancy Pelosi (D-Calif.) closed her speech asking, “May God continue to bless the United States of America as we continue to expand freedom,” pausing awkwardly for applause her LGBTQ activist audience did not supply. At the White House press briefing before the outdoor event, 1980s rocker Cyndi Lauper — her gray hair dyed magenta — closed her eyes, clasped her hands, and imitated a childlike prayer at the White House press briefing, supplicating, “Bless Joe Biden and all the people that worked on this.” After Biden signed the law, loud speakers blasted a cover version of the 1986 Steve Winwood hit “Higher Love,” which songwriter Will Jennings described as “a modern hymn” pleading for people to find the reality of God’s love.

The speakers spoke in rapturous terms about the federal government’s redefinition of marriage, a prepolitical institution. The new law marked “a glorious moment of triumph,” Pelosi told an estimated 5,000 people on the South Lawn of the White House. She thanked Biden for his “protection of marriage,” adding that the bill “defends dignity, because everyone deserves to bask in the magical blessing of building a union.” Schumer similarly called same-sex marriage “about as American an idea as they come.” President Biden called the law “a vital step … toward creating a nation where decency, dignity and love are recognized.”

The White House invited two drag queens who perform with minors to attend the ceremony: Marti Gould Cummings and Jesse Havea, who performs under the name Brita Filter. “I am honored to be at The White House in full drag representing my community and witnessing this historical moment,” Havea boasted on Instagram Tuesday. Cummings went in 2019 by singing to a two year old, while Havea twerked before adolescents in the chapel of Grace Church School. The Church of Jesus Christ of Latter-Day Saints also sent two representatives to Tuesday’s signing ceremony. Joel Hunter, a faith adviser to Barack Obama, was also in attendance.

The drag queens’ inclusion proved one of several signs that the LGBTQ celebration tolerated the sexualization of children. Vice President Kamala Harris quoted “the great Harvey Milk,” a late LGBT politician who had a sexual relationship with a 16-year-old male runaway. Pelosi also remembered Milk on the House floor shortly before the bill’s final passage.

Christian leaders could not have more sharply dissented from the invitees, nor the substance of the new law, which they say will impinge on their First Amendment rights.

“President Biden has now unleashed one of the greatest assaults on religious freedom in modern history,” said Family Research Council President Tony Perkins. “The principles of our First Freedom, guaranteed in our Constitution, that he swore to ‘preserve, protect and defend,’ are now in even greater jeopardy. These founding principles have been challenged for seven years since the Obergefell decision, and in cases involving Jack Phillips and others.”

The law incentivizes LGBT activists to sue Christian business owners who refuse to take part in same-sex ceremonies, threatens the tax-exempt status of religious adoption agencies and other nonprofits, and equates a belief in natural marriage with discrimination. A representative of the Alliance Defending Freedom charged the Biden-Harris administration with “continuing a pattern of blatant hostility against people of faith.”

Republican leaders agreed the bill has insuperable flaws inspired by anti-Christian bias. “The Respect for Marriage act doesn’t have anything to do with respecting marriage,” Rep. Jim Banks (R-Ind.), chairman of the House Freedom Caucus, told Laura Ingraham Tuesday night. “This is all about attacking people of faith, attacking the nuclear family, people who speak out in favor traditional marriage, and attacking your religious freedom.” Similarly, Florida Governor Ron DeSantis (R) said the new law “will absolutely put religious institutions in difficult spots,” pursued by “very aggressive” activists or administrators.

Despite that grim analysis, the bill’s backers in the GOP continue to defend the law. “I would say this is a win for those that believe in religious freedom, religious liberty,” contended Senator Joni Ernst (R-Iowa), who voted for the bill, on a conference call this week. The law passed the Senate with 12 Republican votes after adding a religious liberty amendment that legal scholars deem insufficient. It then cleared the House of Representatives with the support of 39 Republicans, a substantially smaller number of supporters than when Pelosi brought the bill before the House in July after only one day’s hearings.

The signing marks a sharp societal decline in its understanding of marriage. In 1996, Democratic President Bill Clinton signed the Defense of Marriage Act into law, defining marriage as the union of one man and one woman for federal purposes. Eight years later, George W. Bush rode a wave of backlash against judicial activism on the issue due to a paper-thin reelection. As late as 2008, then-Senator Biden said in a debate with Sarah Palin that neither “Barack Obama nor I support redefining from a civil side what constitutes marriage.” By May 2012, Biden told “Meet the Press” he was “absolutely comfortable” with equating same-sex relationships with marriage. And this year, Bush’s 2004 campaign manager, Ken Mehlman, lobbied his fellow Republicans to endorse the legal redefinition of marriage.

Today, Biden believes the redefinition of marriage demands a national celebration, complete with the music of Lauper and Sam Smith, who identifies as non-binary. Smith sang the hit “Stay,” which was released in April 2015, making it three months older than the institution of same-sex marriage on the national level. Later that evening, First Lady Jill Biden tweeted “Love forever more,” with heart emojis and a picture of the White House lit up in rainbow colors, as Obama did after the Obergefell decision.

Yet hardcore LGBTQ activists boycotted the event, insisting the bill does not go far enough. “I am not celebrating,” declared Jim Obergefell, the plaintiff in the 2015 Supreme Court case that invented the constitutional “right” to same-sex unions. “Jim couldn’t be here today,” Biden fibbed during his speech Tuesday.

The Democratic officials promised to push forward for greater restrictions on religious liberty — and a full left-wing agenda. “Our work isn’t done. We won’t rest until the Equality Act … is passed into law,” said Pelosi. Biden agreed the harsher Equality Act must be passed, because “a person can be married in the morning and thrown out of a restaurant for being gay in the afternoon,” an event not known to have occurred.

Biden also tied same-sex marriage to advocating for the right of minors to have transgender surgeries. “We need to challenge the hundreds of callous, cynical laws introduced in the states targeting transgender children, terrifying families, and criminalizing doctors who give children the care they need,” he said. Allowing children to remove healthy organs will “protect these children, so they know they are loved.” He likened laws against these procedures to “racism, anti-Semitism, homophobia, transphobia — they’re all connected.”

Vice President Harris said the coalition that passed the same-sex marriage act would stand together to advance abortion-on-demand. “This is a victory, and it is part of a larger fight,” Harris said. “The Dobbs decision reminds us that fundamental rights are interconnected, including the right to marry who you love, the right to access contraception, and the right to make decisions about your own body. So, to continue to protect fundamental rights, let us continue to stand together, because that is the beauty of the coalition assembled here today.”

Whether they succeed or fail, “Bible-believing Christians … understand that whether by the White House, the Court, or by the Congress, truth cannot be altered — nor will our commitment to that truth. Marriage is an institution created by God for the well-being of men, women, children, and society as a whole,” said Perkins. “It cannot be redesigned without impoverishing them all.”