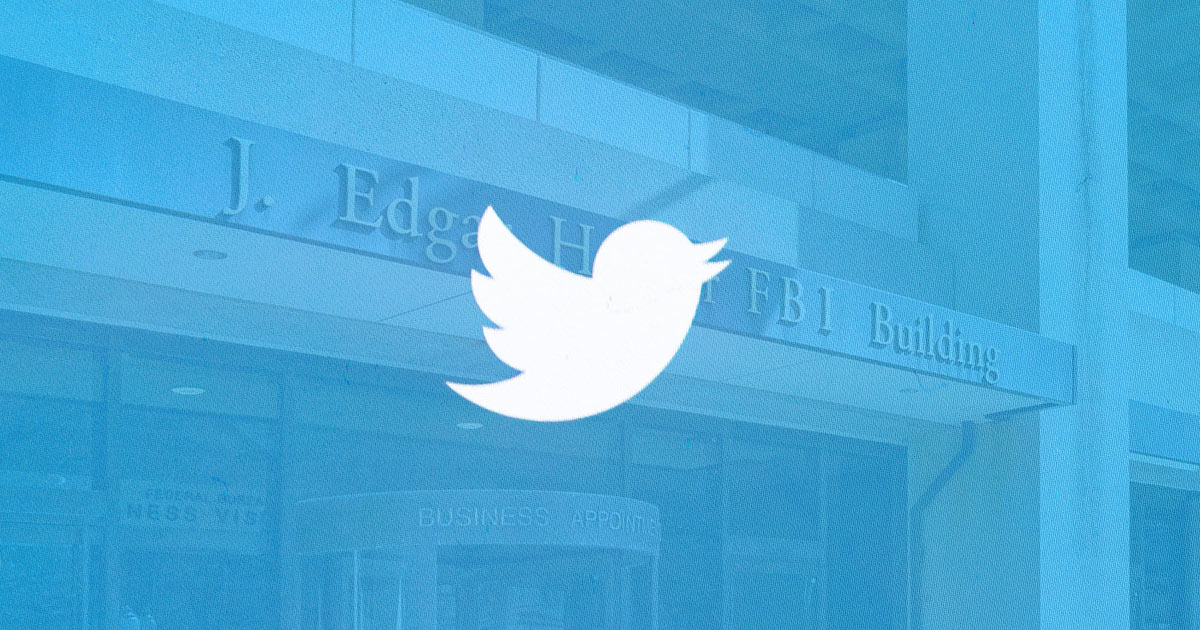 The FBI’s Twitter Censorship an ‘Apparent Violation of the Law’: Expert

The federal government made an “apparent violation of the law” by pressuring social media outlets to ban or suppress American citizens’ accounts, or to ban the Hunter Biden laptop story as a foreign intelligence operation, an expert has said. Meanwhile, the federal government exploited the same online platforms to spread U.S. government propaganda, new disclosures from Twitter have revealed.

The seventh and eighth batches of the “Twitter Files” focused on the FBI’s suppression of the explosive contents of Biden’s laptop, which threatened to link 2020 Democratic presidential candidate Joe Biden to a murky web of foreign influence-peddling, as well as military intelligence campaigns using fake accounts to echo the Pentagon’s party line. Previous accounts showed how the FBI established a one-way portal to Twitter to request officials place certain accounts under a “shadow ban” or remove whole posts altogether — requests often received, and honored, by a plethora of former FBI agents and other government officials burrowed deeply into every level of the platform.

“The FBI was abusing its authority to target and abuse the First Amendment rights of American citizens and seems to me an apparent violation of the law,” Judicial Watch President Tom Fitton told “Washington Watch” guest host Joseph Backholm on Tuesday. “When you have collusion to suppress the civil rights of U.S. citizens” between the government and the private sector, “that violates federal law.”

The FBI paid Twitter more than $3.4 million in taxpayer funds as reimbursements for processing its ban requests. “We have collected $3,415,323 since October 2019!” wrote a Twitter official in early 2021. That means “American taxpayers paid Twitter via the FBI to censor themselves and help Joe Biden win” the 2020 election, noted Charlie Kirk of Turning Point USA.

Social media officials engaged in “surveilling, sharing information about the typically constitutionally protected activities of U.S. citizens, and then censoring U.S. citizens at the behest of the FBI,” said Fitton. “If you get paid to do things like that, it sounds to me like you’re operating as an FBI informant or asset.” Freedom of speech is “a God-given right, and the FBI just can’t go in and ask someone to suppress it,” Fitton told Backholm.

Yet the effort has not lightened. In a January 2020 email from Carlos Monje Jr., Twitter director of Policy and Philanthropy, he stated, “a sustained (If uncoordinated) effort by the IC [intelligence community] to push us to share more info & change our” policies, “including by whispering to congressional staff.”

That coordination is par for the course for the Left, former FBI Special agent Jonathan Gilliam told Backholm on Monday’s “Washington Watch.” “The Democrat Party and the leftist socialists in this nation are very oppressive; they want to make people think the way they do, and they want to block people from spreading information that they don’t agree with.” FBI officials “moved from an observation platform to actually telling social media platforms what they would like to be pulled off. In effect, they were dictating [to] these social media platforms — and it’s not just Twitter.”

“Twitter [has] the same ideological stance as these leftists in the government [who] were basically doing the government’s bidding to oppress the First Amendment and to censor free speech,” he said.

Journalist Michael Schellenberger focused on the federal government’s suppression of the Hunter Biden laptop story across social media platforms, beginning when the FBI intercepted the computer from repair store owner John Paul Mac Isaac on December 9, 2019. Arrests and prosecution did not follow bur rather “an organized effort by the intel community to influence Twitter & other platforms,” he wrote. “[D]uring all of 2020, the FBI and other law enforcement agencies repeatedly primed [high-ranking Twitter official] Yoel Roth to dismiss reports of Hunter Biden’s laptop as a Russian ‘hack and leak’ operation.”

The FBI, Department of Homeland Security, and other federal agencies held weekly meetings with Twitter, Roth revealed in December 2020, where “federal law enforcement agencies communicated that they expected ‘hack-and-leak operations’ by state actors might occur in the period shortly before the 2020 presidential election, likely in October.” U.S. officials claimed the misinformation would be the work of APT28, a Russian intelligence unit. These alleged forthcoming foreign leaks were “discussed throughout 2020. I also learned in these meetings that there were rumors that a hack-and-leak operation would involve Hunter Biden.” Nor were the FBI “warnings” limited to one social media platform. Facebook CEO Mark Zuckerberg told Joe Rogan that the intelligence community similarly “warned” his security team of a coming “dump.”

The FBI also surveilled Rudy Giuliani, who had received a copy of its contents and prepared to publish them before the 2020 election.

Just one month before the New York Post’s publication of the Hunter Biden laptop story, the feds had Roth and other social media figures take part in a “tabletop exercise” about a potential foreign intelligence agency’s “Hack-and-Dump” operation related to Hunter Biden. Formerly confidential documents about the exercise, run by the Aspen Institute, show social media agents reacted to a theoretical dump of documents from “Bidencrimes.info” implicating Joe Biden in illegal activity related to his son’s employment by Ukrainian energy firm Burisma. The scenario shows the forces of the intelligence community, MSNBC, NPR, and social media squaring off against a misinformation campaign emanating from Rudy Giuliani, Fox News, and Mike Pompeo.

When the Hunter Biden laptop story broke in October, Yoel Roth said it “set off every single one of my finely tuned APT28 hack-and-leak campaign alarm bells.”

Internal documents show Roth admitted the New York Post story isn’t “clearly in violation of anything” in Twitter’s policy. But, he said, the platform came to believe the “suggestion from experts” of an elaborate conspiracy theory: “there was a hack that happened separately, and they loaded the hacked materials on the laptop that magically appeared at a repair shop in Delaware.”

On that basis, they suppressed the Hunter Biden laptop story, likely changing the outcome of the 2020 presidential election. “So on top of the suppression of civil rights, you have potential election interference,” Fitton told Backholm. Enough Biden voters in swing states say they would have voted for another candidate had they known about the laptop story that it would have reelected President Donald Trump to a second term, according to a Technometrica Institute of Policy and Politics poll.

“They were grooming Twitter employees throughout the autumn of 2020 to immediately recognize our story … Russian disinformation, hacked material,” New York Post reporter Miranda Devine, author of “The Laptop from Hell,” told Fox News host Laura Ingraham on Monday night. “And they sweetened the pie by giving Twitter $3.4 million of taxpayer money.” The federal government set up “an entire censorship regime … to ensure no derogatory material about Joe Biden from the laptop would ever see the light of day before the election. It was strangled at birth.”

“Unfortunately, half of the country believes that, because their media organs of choice have completely ignored the Twitter files,” Devine said. Legacy media outlets instead “peddled lies from the intelligence community from the very beginning of the Trump campaign, the Russian collusion lies that just now blended into these lies about the Hunter Biden laptop also being Russian disinformation. And it all helps one side of politics, which is the Democrats.”

Twitter Files #8, released on Tuesday by Lee Fang, revealed the U.S. government used a “vast network of fake accounts & covert propaganda” to promote official U.S. policy, and possibly spread misinformation about its enemies, on Twitter and other social media platforms. Twitter “whitelisted” a handful of accounts, which military officials in time presented as legitimate accounts of people living in the Middle East, not intelligence assets recycling propaganda. Twitter officials were “well aware” of at least 157 such accounts, many of which it “discovered” on its own. A separate investigation found the network extended beyond Twitter onto other social media platforms, where phony accounts, complete with artificially generated photos accused Iran of “threatening Iraq’s water security and flooding the country with crystal meth,” and other war atrocities propaganda.

Gilliam sees little hope for change on social media at large, “as long as the leftists are in charge” of the government and social media platforms. “And the Republican Party is full of careerists that don’t do anything.”

Yet Rep. Greg Steube (R-Fla.) promised that the incoming Republican majority on the House Judiciary Committee will investigate the FBI’s actions thoroughly. “Thankfully, we now have evidence and facts to be able to bring in these individuals and depose them,” Congressman Steube told Backholm Monday. “And we’re looking forward to doing that.”