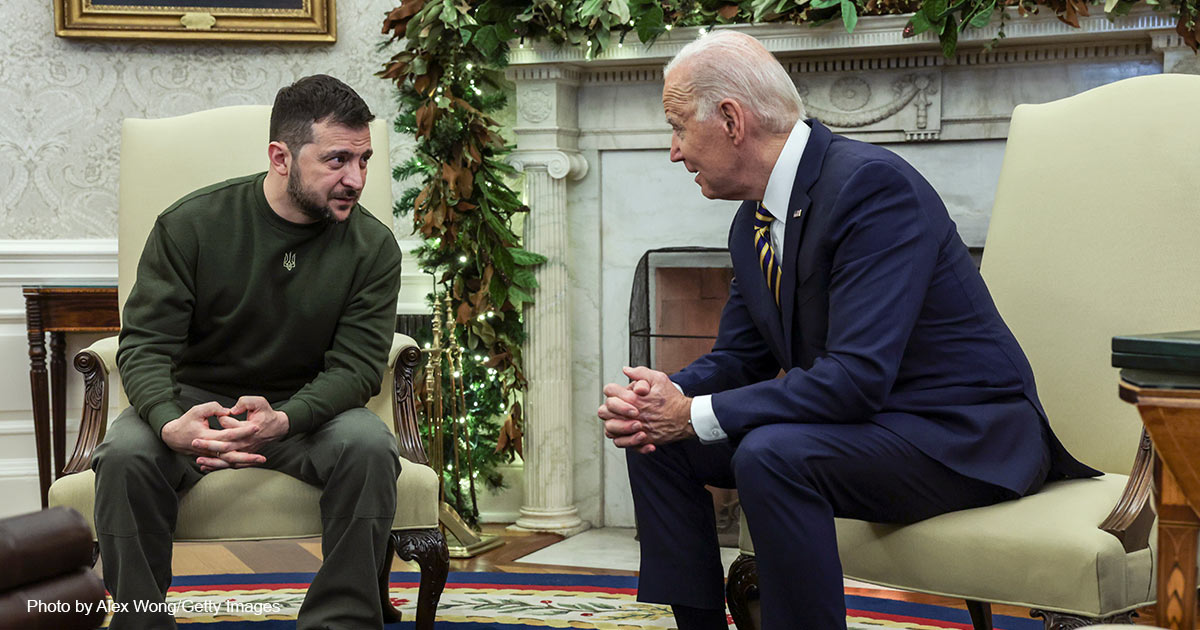 Ukrainians have wildly exceeded expectations in defending their homeland. With some early estimates expecting Ukraine’s defenses to topple within a week, not only have they held out 43 times longer (over 300 days), but they have recaptured large swaths of territory, even recapturing some key Russian positions amid heavy fighting. Ukrainians have faced down Russian war crimes — including forcibly deporting Ukrainians, deliberately firing upon civilians, and brutally mistreating anyone unlucky enough to be caught in occupied territory — a vastly superior arsenal, and staged political referendums of secession. Their pluck and tenacity have been spearheaded by a man who, until recently, had only held political office in a television sitcom.

But the Ukrainians likely would not have succeeded without the munitions and money provided by America and European countries. For 30 years since the Soviet Union collapsed, Russia has actively interfered in Ukrainian affairs to keep their smaller neighbor impoverished, economically and politically dependent, and corrupt. Ukraine has only had eight years to recover from the last time Russia invaded, in 2014. All the willpower in the world could not have compensated for the shocking mismatch in military power without a bit of foreign assistance. Zelenskyy recognized this as he thanked the U.S. Congress. “Ukraine is alive and kicking. Thank you. … We have artillery, yes. Thank you,” said Zelenskyy. “Thank you very much. Thank you for both financial packages …”

U.S. officials are preparing more massive aid packages for Ukraine. The Pentagon plans to send $1 billion worth of weapons, including Patriot missiles, while the Ukraine Security Assistance Initiative will deliver $800 million — for a total $1.8 billion. Congress has included another $44.9 billion in the $1.7 trillion omnibus lumbering rudely through the legislative process. This is added to $18.2 billion the U.S. has committed to Ukrainian security since January 2021.

Some Republican legislators are souring on the Ukraine war, expressing impatience, skepticism, or even outright opposition to continued funding. “Americans are growing very weary of funding this war,” said Rep. Thomas Massie (R-Ky.). Rep. Andy Biggs (R-Ariz.) insisted, “No more blank checks to Ukraine,” adding, “what is enough?” Zelenskyy tried to respond to such concerns, “Your money is not charity. It’s an investment in the global security and democracy that we handle in the most responsible way.”

It’s fair to object, at this point, that Americans are not obligated to accept Zelenskyy’s guarantee at face value. It’s worth questioning whether a regime internationally infamous for corruption can do anything “in the most responsible way.” But, as far as our limited tracking capabilities can assess, U.S. officials have found no evidence that Ukrainian officials are selling the weapons on the black market. National Review’s Jim Geraghty suggests this is “because their country is getting invaded, and they need those weapons for themselves. Starving men don’t resell food.”

Indeed, the Ukrainian military has “been highly competent” in deployed U.S.-supplied weapons systems, Rebeccah Heinrichs, senior fellow and director of the Keystone Defense Initiative at the Hudson Institute, told The Washington Stand. They “have destroyed Russian weapons, have targeted their logistics resources and Russian warships, and have reportedly diminished their fighting force by 100,000 soldiers.” They could have done even more if we had given them more munitions sooner. Even with our aid, Zelenskyy said, “The occupiers have a significant advantage in artillery. They have an advantage in ammunition. They have much more missiles and planes than we ever had.”

There’s an additional question about whether the money, even if it is not embezzled, advances U.S. national interests. “The objective should be to restore Ukraine’s national sovereignty and strengthen Ukraine and NATO’s eastern front to preserve peace and keep Russia from thinking it can harm the United States’ ability to advance American interests with our core democratic alliance,” said Heinrichs. “Putin wants to break up NATO, and he needs to take Ukraine to do that.”

Heinrichs thinks the Biden administration’s objectives are less clear and decisive. “The Biden team clearly believed Ukraine would fall to Russia easily. They failed to assess the Russia threat and that failure led to a massive failure of deterrence. The Biden people were also not prepared to back Ukraine,” she said. “Its lack of a strategy and its risk aversion is dangerous. If the Biden White House doesn’t change course and provide Ukraine what it needs to finally push Russia out of Ukraine, the war will be protracted and result in a stalemate. That is a cruel, costly, and unjust approach to this war.”

In fact, after the first, breathtaking weeks, neither side has gained much ground since April, while both have suffered heavy casualties. Having used up its own weapons, Russia is reportedly buying weapons from Iran and North Korea. The war is not only spending Russia’s military power, but is also depleting the arsenals of our other global adversaries as well. “Sending Cold War era weapons to a country defending itself by taking out one of the top tier threats to Americans is a good use of our money,” said Heinrichs.

Meanwhile, another chink in America’s national security can be found closer to home: the southern border. The omnibus package containing so much funding for Ukraine contains a shocking discrepancy. “It expressly prohibits CBP [Customs and Border Protection] funding from being used to improve border security,” noted Representative Dan Bishop (R-N.C.). Specifically, the funds may not be used “to acquire, maintain, or extend border security technology and capabilities, except for technology and capabilities to improve Border Patrol processing” — “processing” is code for, streamlining the release of migrants into the U.S.

In other words, while the U.S. federal government is spending billions of dollars to defend the frontiers of other countries (Jordan, Lebanon, Egypt, Tunisia, and Oman, in addition to Ukraine), it expressly forbids the use of any funding to protect our own border. This would be questionable even if our own border was largely secure (imagine, for instance, forbidding the TSA to improve airport checkpoint security). But it becomes unconscionable given the hundreds of thousands of migrants risking life and limb to pass through the gaping holes in our border security. And, when Title 42 expires, the situation will only grow more calamitous.

The issue with another round of Ukraine funding has little to do with the war, its aims, or its connection to U.S. interests. The issue is that the U.S. government is generously funding a war far away, while stubbornly refusing to acknowledge or address the national security crisis on our own border. “The fact that the Biden White House refuses to close our own border, defend our national sovereignty, and more forcefully deter adversaries abroad, is all a dereliction of duty,” said Heinrichs.