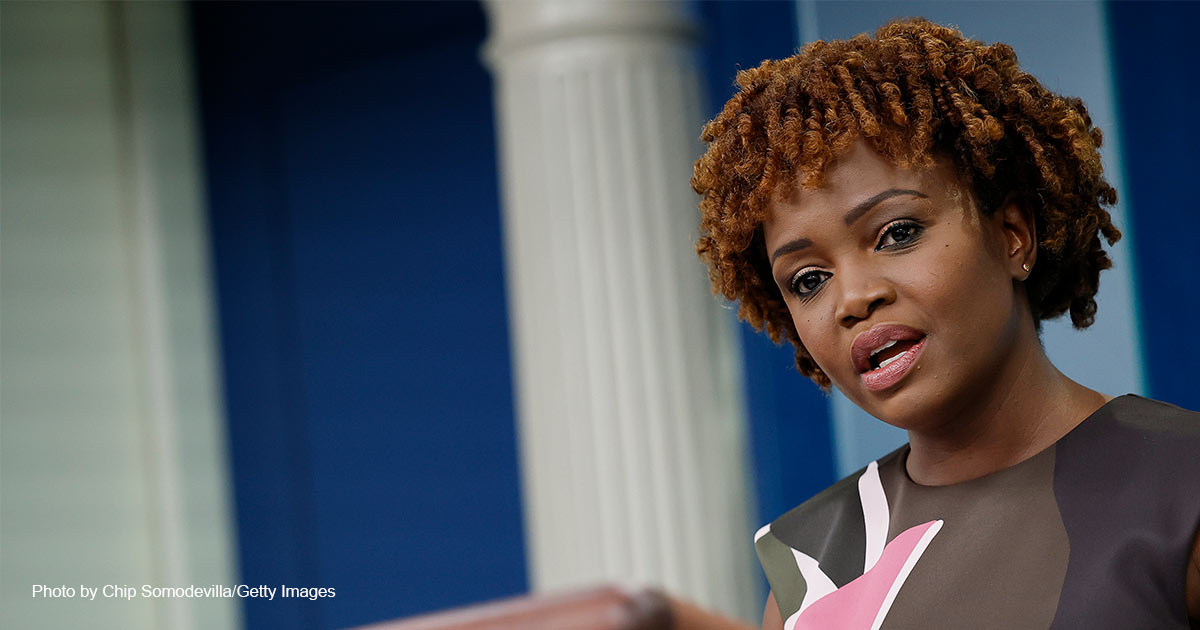 Late Thursday night, the White House admitted that its bailout of student loans will cost hundreds of billions of dollars over the next 10 years — but a former congressman said Democrats’ claims that the action will not deepen the national debt would “embarrass George Orwell.”

Since releasing his plan to let graduates shift between $10,000 and $20,000 in student loan debt to their fellow Americans, the Biden administration has struggled to explain who will pay, how it will impact the federal deficit, or even how much it will cost.

The total burden to taxpayers “remains to be determined” depending on “what percentage of eligible borrowers actually take up this opportunity,” said White House spokesperson Karine Jean-Pierre on Thursday. “That is something that the Department of Education is going to lead. … I don’t have any more to speak on to that.”

Later in the evening, Jean-Pierre told CNN’s Don Lemon she said the cost is “going to be about $24 billion per year,” or roughly a quarter-trillion dollars in 10 years. She believed 75% of eligible borrowers will apply for the funds. That’s in line with the the Penn Wharton Budget Model, which calculated the costs at $329 billion over the next decade. But it’s significantly lower than an analysis from the Committee for a Responsible Budget, which pegs the bailout’s price tag at between $440 billion and $600 billion. The center-right think tank settled on an estimate of a half-trillion dollars: $360 billion for the bailout, $120 from lowering the amount students pay in the future, and $20 billion from extending the payment pause until January 1.

While Jean-Pierre answered the question of total cost, she spent the Wednesday press briefing dodging questions about who would pay for the bailouts. Both Wednesday and Thursday, she claimed the administration’s “$1.7 trillion in deficit reduction” would absorb the cost, and that ending the 29-month-long moratorium that allowed graduates to pause student loan repayments, is “going to offset a lot of what we’re doing” by generating $4 billion in revenue. She did not discuss whether Biden’s bailout would encourage some to default. She responded to a query about whether the policy would lead colleges to raise tuition rates by saying, “We have to see.”

Claiming a $500 billion debt bailout will not increase the federal deficit would “embarrass George Orwell,” said David Brat, former U.S. congressman from Virginia, who now serves as dean of Liberty University’s business school. The “deficit reduction” follows the historic debt generated by the COVID-19 lockdowns — a debt that economists across the spectrum understand is unsustainable. Touting a lower deficit is like standing “at the bottom of the Grand Canyon, but then a few rocks fall down, and you get to stand on those little tiny rocks,” Brat told “Washington Watch” guest host Joseph Backholm on Thursday. “You’re still at the bottom of the Grand Canyon. … Only in D.C. can you get away with that kind of logic.”

Biden dismissed concerns about his stated policy, tweeting, “I will never apologize for helping America’s middle class — especially not to the same folks who voted for a $2 trillion tax cut for the wealthy and giant corporations that racked up the deficit.” Biden made no distinction between tax cuts, which allow people to keep more of the money they earned, and bailouts, which force Americans to assume other people’s debts.

The cumulative effect of borrow-and-spend policies still threatens U.S. economic health which could, in turn, undermine America’s standing in the world. “Santa Claus is popular. Free stuff is popular. And the American people have got to get over this very bad habit,” insisted Brat.

Academia may not merit a bailout based on its competence, he said. Brat wished that colleges would begin “truly educating our kids and our young scholars into productive skills like technology, computer science, I.T. information systems, engineering, data analytics, data analysis.” But productivity has not benefited, he said. “The Chinese and the Indians haven’t missed this memo,” stated Brat. “We’re really harming our kids and the next generation. And it’s intentional, I hate to report.”

The economic discrepancies require Christians to combine the fundamental principles of economics with the moral precepts of the Bible. “Christians are the greatest people on Earth,” he said, but “sometimes they’re so innocent, they don’t get how evil the world is.” He cited government assurances that the real estate market was sound shortly before the 2008 market crash, as well as recent forecasts that the United States — which is currently in recession and reporting economic contraction — would somehow eke out a year of overall positive growth in 2022.

“It’s incumbent on us” to know sound principles, so that Christians cannot be misled by others, concluded Brat. “The Christian community has to have intellectual and moral confidence in what we do.”