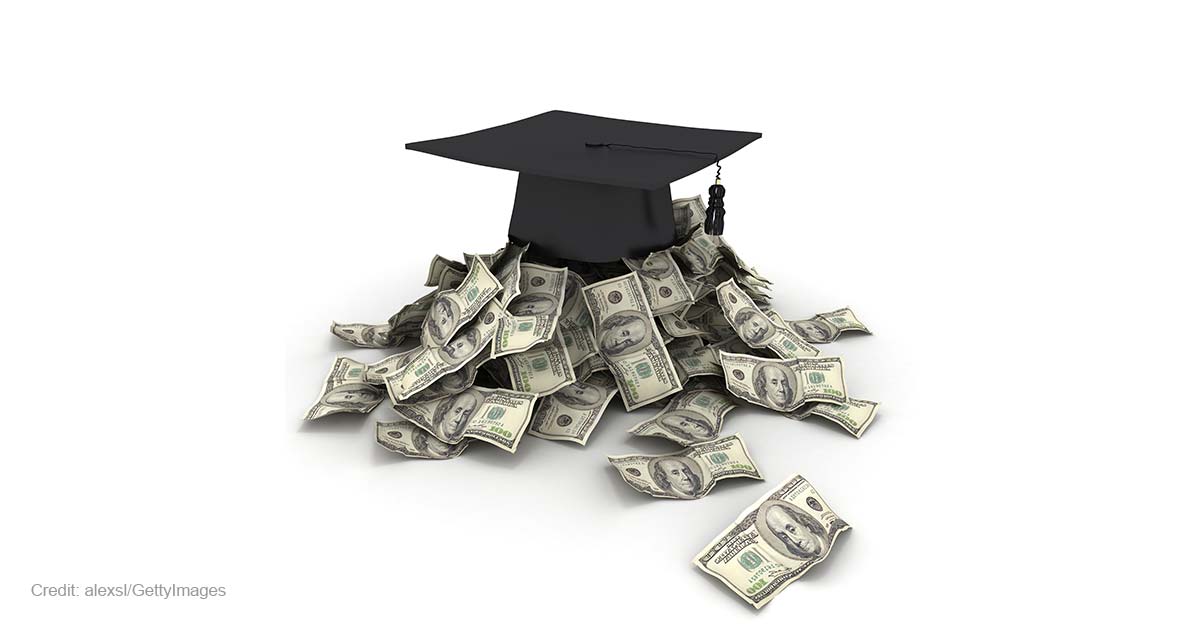 President Joe Biden announced Wednesday that he will force U.S. taxpayers to bail out college students for up to $20,000 of student loan debt and further reduce repayments — a policy that sounds superficially compassionate but which victimizes the innocent, rewards the guilty, and violates biblical morality in a plethora of ways. Here are the first seven that come to mind:

1. It incentivizes the bad behavior of borrowers. The Bible tells us to fulfill our promises, but Biden’s new program encourages Americans to renege on their legal obligations. When the news of Biden’s student loan policy broke, Claremont Institute Lincoln Fellow and Daily Wire reporter Megan Basham responded by tweeting two Bible verses:

She could have cited a seemingly endless array of scriptures commanding believers to uphold contracts and keep our word (Numbers 30:2, Proverbs 12:22, Matthew 5:37, Galatians 3:15, Leviticus 6:1-5, Joshua 6:22-25, Joshua 9, James 5:12). “If the president goes through with this policy, how many people in the future do you think will ever repay a student loan?” Stephen Moore, a senior fellow at FreedomWorks and former economic adviser to President Donald Trump, asked “Washington Watch” guest host Joseph Backholm on Tuesday.

Some on the far-Left see the harmful effects of Biden’s student loan bailouts as a feature, not a bug. Rep. Jamaal Bowman (D-N.Y.), a democratic socialist, told MSNBC last week, “The fact that we’re saving [non-payers] from going into default is gonna be huge for their credit rating. It’s gonna allow them, hopefully, to go forward and take out mortgage loans and car loans.” Bowman boasts that Biden’s student loan bailout will enable people who defaulted on their loans to take out even more loans. That’s good news to socialists, who long to see capitalism destroyed from within. But it’s bad news for those of us forced to dodge the falling debris and detritus of the economy they seek to tear down.

2. It rewards the bad behavior of college administrators. Although universities held out a college degree as the expressway to a comfortable life, all too often they did not deliver. One-third of all college students never make it to their graduation day, and an even higher percentage of those who took out student loans (38%) loans did not earn a degree within six years, according to progressive scholar Mark Huelsman. Of those who do graduate, 41% hold jobs that don’t require any college degree, and 73% work in a job that doesn’t require the degree they earned.

In other words, a not-insignificant percentage of students were poorly served by their alma mater. Unfortunately, current law gives the university no reason to care.

Almost no student loan debt qualifies to be discharged, even in bankruptcy. “When the government guarantees that the payment to these universities, and those debts are not dischargeable, there is no risk to the institutions for” admitting “unqualified students [and] giving them degrees in something that will not likely lead to an income,” Joseph Backholm noted on Tuesday. Universities simply huddled as many enrollees as possible into their dorms, collected taxpayer-backed loans, and gave many students a political indoctrination, a four-year hangover, and a useless piece of paper. These young people wound up saddled with debt, while academics and administrators laughed all the way to the bank — and Biden’s student loan “forgiveness” assures that they deposit your money.

3. It intensifies the bad behavior of the government. Biden’s bailout revealed interlocking layers of iniquity. The government rigged college loans so that most would not be paid back. Long story short, in 2009 and 2014 the Obama-Biden administration instituted an Obamacare-style scheme that capped most college loan payments at 10% (or, in some cases, 20%) of a graduate’s discretionary income. That made payments so low that three-quarters of students with such loans couldn’t pay back the interest, let alone the principal; that is, the more they paid, the more they owed. While students who deliberately gamed the system deserve blame, others could never hope to meet their obligations because of the way Obama and Biden restructured the loan process. And on Wednesday, Biden lowered many payments further, to 5% of discretionary income, setting up the next wave of defaults. The Lord may have had this kind of trap in mind when He promised to deliver “the poor and the needy from him who plunders him” (Psalm 35:10).

4. It creates a system of false measures. Between Wednesday’s announcement and Biden’s recent “Fresh Start” program, which shifts 7.5 million people who quit paying their student loans before COVID out of default status, the Biden administration has gone a long way toward falsifying America’s economic ledger. “Under this scheme credit reports will no longer accurately reflect credit history,” noted Rep. Virginia Foxx (R-N.C.). Opposition to false weights and measures runs throughout the Bible. (See Leviticus 19:36, Deuteronomy 25:13, Proverbs 16:11, and Proverbs 20:10.) “Diverse weights are an abomination to the Lord, and dishonest scales are not good,” the Lord declares (Proverbs 20:23). The dishonest measure of the shekel likely inspired Jesus to drive the money changers out of the Jerusalem Temple. Biden’s loan forgiveness baptizes students who defaulted on their loans in taxpayers’ money, washes away their fiscal transgressions, and transfigures them into creditworthy borrowers — while leaving the banks who will sign off on those loans none the wiser.

5. It discourages virtuous behavior. Biden’s college loan bailout encourages sluggards, sloth, and government dependence at the expense of thrift, industry, and responsibility (Proverbs 6:6-11). Voters grasp this intuitively. A father who pulled double shifts to put his daughter through college debt-free confronted Senator Elizabeth Warren (D-Mass.) in 2020 while the short-term presidential candidate stumped in Grimes, Iowa. When he asked if he would get his money back, she said, “Of course not.” He replied, “So, you’re going to pay for people who didn’t save any money and those of us who did the right thing get screwed.” Warren then laughed while the man recounted how hard he worked to earn that money, while his friend frittered his money away. Stephen Moore described Biden’s plan as “really unfair to the people who did the stand-up thing and made the financial sacrifice to do what's right — and that is to pay back the money that they owe.”

6. It’s unconstitutional and illegal. Joe Biden’s student loan bailout violates both the U.S. Constitution and statutory law. While the distinction is worth nothing, it is redundant: “Unconstitutional” is another way of saying “illegal.” Anything not authorized by Article I, Section 8, of the U.S. Constitution violates our national charter. The Founding Fathers gave us the right to amend the Constitution, but we may never ignore it. That’s precisely what this announcement does. “The president of the United States does not have the legal authority to cancel contract, and that is exactly what he is doing: He is voiding a repayment contract, and he does not have the ability to do that,” Rep. Bryon Donalds (R-Fla.) told “Washington Watch” guest host Joseph Backholm on Wednesday. Not so long ago, Speaker of the House Nancy Pelosi (D-Calif.) agreed. “People think that the president of the United States has the power for [student loan] debt forgiveness,” Pelosi told the media last July. “He does not have that power. That has to be an act of Congress.”

Biden’s plan also violates existing statutory law. When former Secretary of Education Betsy DeVos inquired whether she had the legal right to grant mass student loan cancellation, her department’s general counsel analyzed all relevant laws — including the HEROES Act — and replied that the executive branch does not have the “statutory authority to cancel, compromise, discharge, or forgive, on a blanket or mass basis, principal balances of student loans … and/or to materially modify the repayment amounts or terms thereof.” Any bill to write-off a debt is a spending bill which must originate with Congress. On the contrary, the federal government has a legal requirement to “try to collect a claim of the United States Government for money.” The opinion noted that Congress does not “hide elephants in mouseholes.” That is, Congress does not “impliedly delegate a policy decision of massive economic and political magnitude — as blanket or mass cancellation, compromise, discharge, or forgiveness of student loan principal balances … to an administrative agency.”

7. It forces the innocent to pay for the guilty. The student loan crisis was created ex nihilo by the unholy trinity of politicians, college administrators, and a subset of students who never intended to repay their debts. Yet the burden will fall on U.S. taxpayers, either in the form of higher taxes (and more audits), heavier debt, or more rampant inflation — or all three. Middle-class voters had no hand in the creation of this system, except to work sacrificially to enrich the beneficiaries in the government-academic industrial complex. Their only fault consisted in not paying attention to the way their elected officials perfected a crony con game of extraction, expropriation, and exploitation. So, perhaps they’re not innocent after all?

No legal fig leaf can cover up the naked lawlessness and inverted ethics displayed by this action, which was undertaken to cover up a failure of Biden’s own making. Bad morality leads to a bad economy. This policy will only deepen America’s systemic economic failures.