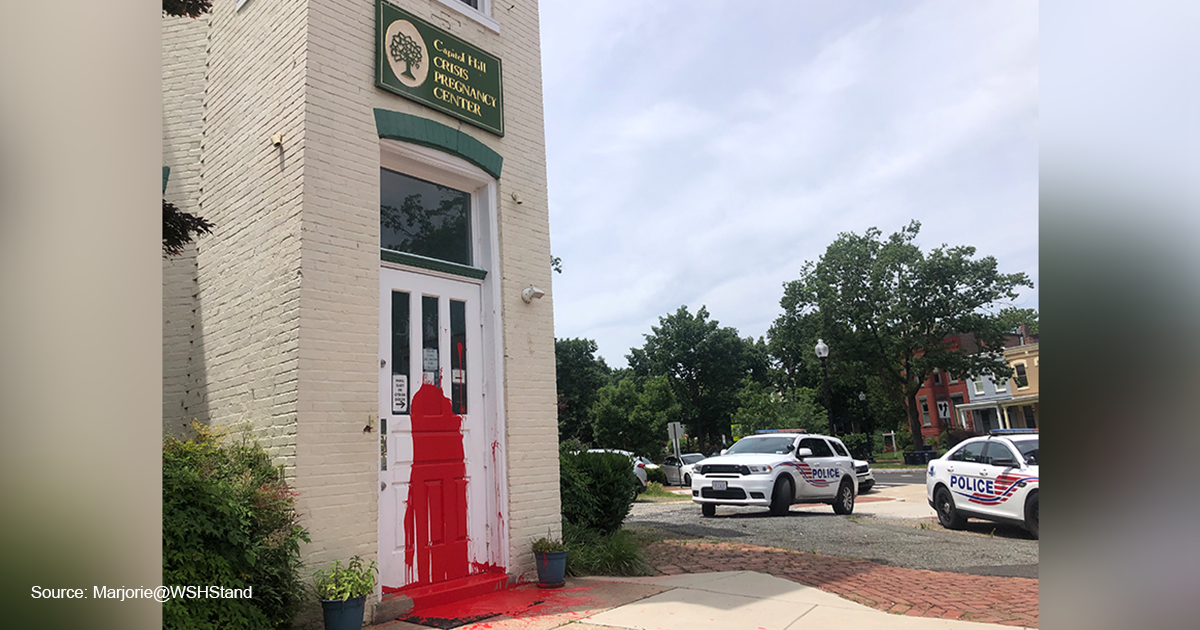 So many pregnancy centers have been attacked that they are in danger of turning from a tragedy into a statistic. Another pregnancy center had its windows smashed on Sunday night, this one in Dearborn Heights, Michigan. That brings the total to 63 acts of violence, property destruction, and disruption of religious services in 52 days. Media cycles often rush from crisis to crisis, pausing only long enough to enjoy the spectacle, then dashing away to something new before the dust clears. Often the participants are left to pick up the pieces alone.

That’s exactly what would happen to the Capitol Hill Pregnancy Center (CHPC) — if it weren’t located only blocks away from the Supreme Court. Its location places it near the epicenter of the nation’s attention as it awaits the release of the Supreme Court decision in Dobbs v. Whole Women’s Health, a case with the potential to overturn Roe v. Wade. Outside the court, passions run so high that violent altercations are possible on any given day. Its location has also made CHPC a target. Nearly three weeks ago, vandals dumped red paint on the front door and graffitied “Jane says revenge” on the side of the building.

An anonymous group calling itself “Jane’s Revenge” claimed credit for the attack on CHPC, among others. “We have demonstrated in the past month how easy and fun it is to attack,” they wrote. They threatened further violence and offered pregnancy centers a choice. “From here forward, any anti-choice group who closes their doors, and stops operating will no longer be a target. But until you do, it’s open season.”

But CHPC hasn’t closed its doors. It has persisted in offering free counseling, classes, and supplies to mothers in need (the vast majority of whom come from the city’s poorest neighborhoods). It has partnered with local churches to conduct a baby bottle drive. It does all these things out of the love of Christ, which overcomes the threats made against it.

This past weekend, Jane’s Revenge reasserted their presence around the court, posting flyers all around Capitol Hill —even within sight of CHPC — promising a “night of rage” whenever the Dobbs decision is handed down. “You said you’d riot,” said the flyer. “To our oppressors: If abortions aren’t safe, you’re not either.”

Jason Townsend, a board member at CHPC, said in an email that the pregnancy center has received threats, in addition to being vandalized already. “The center has been working with and communicating regularly with MPD (D.C. Metropolitan Police) who have been very supportive and increased their patrols around the Pregnancy Center building,” he said. “We also just hired a ‘legit’ and very capable security service to guard the Center overnight for at least the near future.”

In normal times, these security measures would be deemed excessive to an organization devoted to good works and helping the poor. But these are evil times. The past two months have demonstrated that such security measures are needed, for the present. “This is spiritual warfare and a wonderful opportunity for the Gospel to shine,” Townsend said.

Townsend asked Christians to pray for the Capitol Hill Pregnancy Center. Some ways to pray include:

Repeated, anonymous acts of vandalism and property destruction can tempt us to fear, to stay silent, and to stop doing good. But we serve a God who is in control of all things. He acts to display his glory, and He takes care of His children. He is good, and He accomplishes good purposes even through evil deeds performed by evil men (Genesis 50:20). We don’t always know what those purposes are, but we can trust Him and pray. So, when reports of evil attacks seem overwhelming, we shouldn’t disengage; we should fall to our knees.