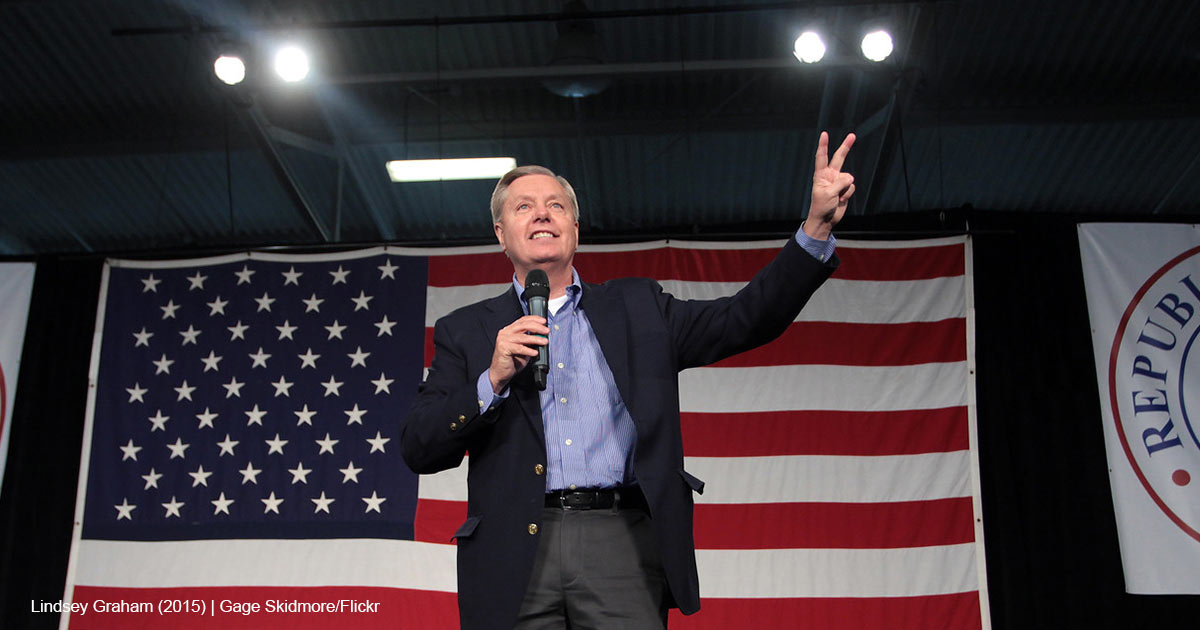 How the GOP Lost the ‘War on Women’ Again

After every national election, the parties represented by an elephant and a donkey desperately seek a third mascot: a scapegoat. This year, both parties have selected a most appropriate sacrifice: the unborn. The Republican Party’s elected officials, consultant class, and older members now insist their unbroken record of success has been interrupted only by religious fanatics’ stubborn refusal to set aside their belief that dismemberment is wrong.

The Big Business-uber-alles wing of the GOP has made Lindsey Graham’s bill, which would protect most (but not all) unborn children at 15 weeks, the unique object of its hatred. Self-proclaimed “pro-choice governor” and possible 2024 presidential hopeful Chris Sununu (R) of New Hampshire said, “I think Lindsey Graham, talking about abortion, nationalizing an abortion ban weeks before the election, did no one any help.” Fox News host Steve Hilton dedicated his post-election monologue to the subject on “The Next Revolution”:

One party can’t control what the other party does in its campaigns, but you don’t have to make their job easier — and that’s exactly what Republicans did ... Democrats repeated over and over again that Republicans would “introduce a nationwide ban on abortion.” What gave them the opportunity to say that? Lindsey Graham’s federal abortion bill, which came out of nowhere at the request of absolutely no one. I know he meant it to help, but honestly, I think it’s the single most stupid and self-harming political initiative I’ve ever seen.

Second, it’s fake news. The flood of Democratic allegations about a “national abortion ban” began long before Graham introduced his bill. Credit where it’s due: The avalanche began shortly after the still-unsolved, May 2 leak of the Dobbs decision, when Senate Minority Leader Mitch McConnell (R-Ky.) answered a theoretical question by saying a national abortion ban could be “possible.” In other words, it began much as the “war on women” commenced when another establishment Republican, Senator Mitt Romney (R-Utah), indulged the RINO fallacy that being nice to the legacy media will make them liked. He, too, answered a theoretical question about banning contraception.

With McConnell, as with Mitt, Democrats pounced. Democratic operative Jon Cooper was one of the first out of the gate, telling his 1.1 million followers, “Mitch McConnell now says a NATIONAL abortion ban would be possible if Roe v. Wade is overturned and Republicans take over Congress. Remember that when you vote in November.” Senator Patty Murray (D-Wash.) followed by tweeting, “Mitch McConnell just said the quiet part out loud: Senate Republicans will move to pass a nationwide abortion ban if they get control of the Senate this November.” A Google search of the term “national abortion ban” prior to Graham’s bill turned up 14 pages of results.

Third, the Republicans responded to the fallout exactly as Hilton counseled: by focusing exclusively on high gas prices and inflation — both of which, while high, were falling. Seeing the traction Democrats were gaining on social issues, Senator Lindsey Graham (R-S.C.) introduced the “Protecting Pain-Capable Unborn Children from Late-Term Abortions” act on September 13. It is a “national abortion ban” that protects no one until the 15th week (or second trimester), allows exceptions for rape or incest, and would have no impact on more than nine out of 10 abortions.

Chris Sununu claimed this bill made voters want to “push back on extremism,” and in a sense, he’s right — but the Democrats embodied the extremism. A total of 72% of all Americans — including 60% of Democrats, 70% of registered independents, and 75% of women — believe abortion should not be allowed after 15 weeks, according to a Harvard/Harris poll supervised by former Clinton strategist Mark Penn.

The lie that a 15-week abortion ban cost Republicans the Senate can be exposed in two neighboring states: Ohio and Pennsylvania. J.D. Vance, not known as a social issues warrior, admitted he believed each state should be able to “have different abortion laws” but said that Graham’s bill represented a reasonable “minimum national standard.” He then counterattacked former “pro-life Democrat” Tim Ryan’s (D-Ohio) newfound abortion absolutism. Vance noted Ryan’s vote for a bill that “required abortion-on-demand at 40 weeks for fully elective reasons.”

“As much as you call me an extremist, you’re the extremist on this issue,” Vance told Ryan, who never recovered. The same strategy worked for Senator Ted Budd (R-N.C.) in the swing state of North Carolina, who co-sponsored Graham’s bill en route to his three-point rout of Cheri Beasly, who premised much of her run on “abortion rights.”

In neighboring Pennsylvania, failed Republican Senate candidate Mehmet “Doc” Oz managed to lose an election to John Fetterman by opposing Graham’s bill. “There should not be involvement from the federal government in how states decide their abortion decisions,” said Oz, voicing skepticism of pro-life legislation that likely matched his authentic views. “As a physician, I’ve been in the room when there’s some difficult conversations happening. I don’t want the federal government involved with that, at all.” The same path of failure led establishment Republican Senate candidate John O’Dea to defeat in Colorado. “I don’t support Senator Graham’s bill,” he said, in part because it did not provide adequate provision for “late term abortion.” He received no bounce — and the Left attacked both men as closet theocrats, anyway.

In other words, candidates who adopted Graham’s extremely lenient bill, explained its popularly supported terms, and counterattacked Democrats for their extremism found a path to victory. Those who opposed the bill or held to a monochromatic economic platform lost over and over again, in highly winnable races.

As it turns out, wishing away the voters’ concerns is not a winning strategy.

The ”national abortion ban” feeding frenzy of 2022 resembled the “War on Women” attack of a decade earlier: Democrats found a compliant, overly credulous Establishment Republican to answer their carefully planted question. Democrats and the legacy reporters then operated a pincher movement to keep the non-issue alive. The GOP’s “wise men” insisted Republicans should ignore divisive social issues and lean into “winning” economic issues — just as Bill Kristol advised Republicans to jettison a constitutional marriage protection amendment in 2004 and embrace “winning” issues like the war in Iraq.

The strategy worked, until it didn’t. By 2014, a two-time Democratic gubernatorial candidate and former Democratic domestic adviser Bill Curry said D.C. consultants’ over-the-top rhetoric about the impending misogyny of nefarious Republicans just “ma[d]e women feel manipulated by a man.” In the one case, they morphed a milquetoast like Mitt Romney into president of the He-Man Woman-Haters Club. In the other, they insisted Graham’s bill would eliminate all abortion from the moment of conception. Their overwhelming cash advantage and legacy media microphone allowed them to drown out the facts and unborn children’s humanity, respectively.

Graham’s bill set pro-life candidates up to defend their views against the Left’s insistence on taxpayer-funded abortion-on-demand until birth. The Left’s baseless “national abortion ban” attacks will continue until pro-life candidates follow his lead, attack the indefensible, and protect the innocent.