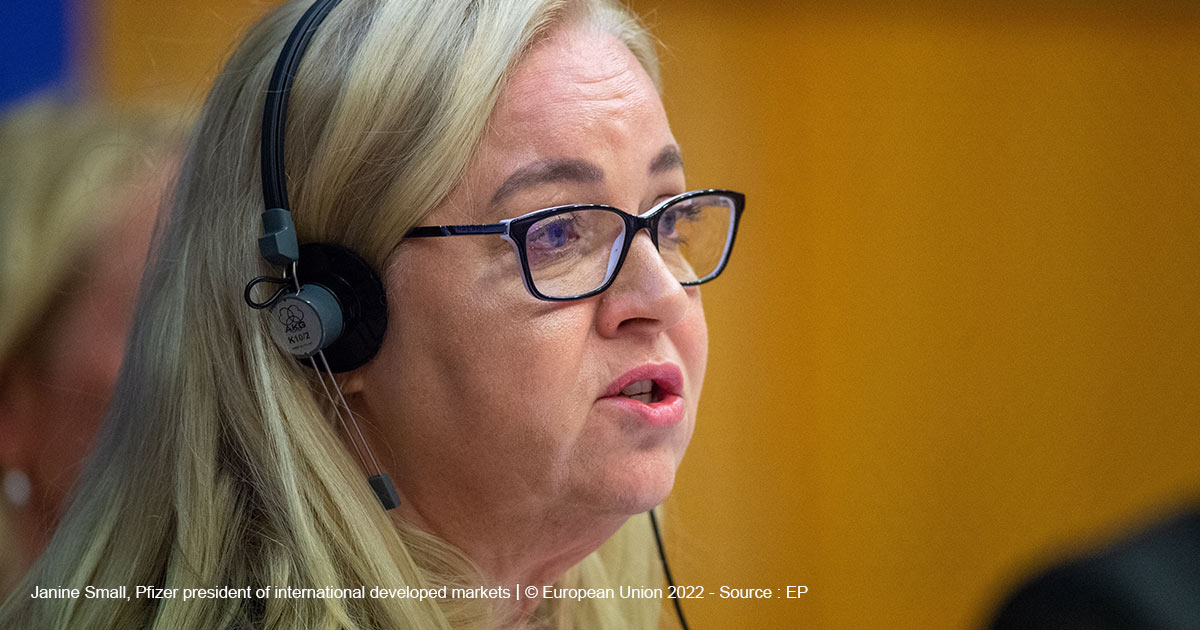 Pfizer never tested its COVID jab to ascertain whether it prevented transmission of the virus, admitted Janine Small, Pfizer president of International Developed Markets on Monday.

During her testimony before the European Union Parliament Special Committee on the COVID-19 pandemic, Rob Roos, a Dutch Member of the European Parliament, asked her, “Was the Pfizer COVID vaccine tested on stopping the transmission of the virus before it entered the market? If not, please say it clearly. If yes, are you willing to share the data with this committee?” Small replied, “[R]egarding the question around whether we knew about stopping immunization [sic, she meant transmission] before it entered the market, no.”

Small argued that Pfizer “had to really move at the speed of science,” which meant there wasn’t time to conduct such studies before the drug received emergency approval during the pandemic. Fair enough. The Trump administration accepted this trade-off as part of Operation Warp Speed, an effort to bring vaccines to market in a fraction of the usual time.

But an absence of data on virus transmission meant that, as Roos succinctly stated, “‘Get vaccinated for others’ was always a lie.” Consider the moralistic crusades carried on in the name of vaccination. For months, everyone from talking heads to social media influencers informed their audiences that remaining unvaccinated was akin to killing the elderly and immunocompromised. The unvaccinated were portrayed as monsters who lacked basic human compassion and therefore deserved to die.

Eventually the public pressure gained governmental enforcement power. Municipalities, utilities, and major corporations issued vaccine mandates; employees who refused the jab couldn’t keep their job. Then vaccine mandates expanded. If you weren’t vaccinated, you couldn’t sit down in a restaurant, order a cup of coffee, or cross the border. If you weren’t vaccinated, you had to wear a mask even when others didn’t. The Biden administration piled on, punishing our military heroes and seeking to force the vaccine mandate onto the private businesses that didn’t go along with the charade.

And that’s what it was — a charade. Whatever the merits against the original variant, the vaccine proved ineffective in future waves (Delta and Omicron) to prevent either infection or transmission. The best that could be said for them is that they reduced the likelihood that someone who contracted COVID would experience severe symptoms. Those who chose to forgo that slight advantage or choose other treatments were vilified and fired. You may as well fire someone for not taking Mucinex.

But you may be wondering, “Where’s the news? The vaccine doesn’t prevent transmission; we knew that already.” Only that now, Pfizer has confirmed the hunches of the mandate skeptics. For those employees who were fired for saying, “The jab is too new; I’m not going to put an untested substance in my body,” this is their vindication. Small consolation, having lost their livelihoods for a charade, but still, it is a vindication.

This new admission allows the Pfizer jab to join the parade of charades, to which Americans have been subjected for the past 32 months. Masks didn’t work, and then they did except they didn’t. COVID didn’t come from a lab, but there’s tons of evidence and no one is allowed to investigate. The foremost medical expert is really a self-serving political hack, who admitted to lying repeatedly, and who had the means, motive, and opportunity to have orchestrated the whole ordeal. And, like a Kim Jong Un speech in North Korea, failing to appear enthusiastic about the entire spectacle was dangerous.

Most scandalous of all, over the past two years of mandates, moralizing, and public pressure (not only in the U.S. but worldwide), those in power never bothered to ask whether Pfizer had tested if the vaccine prevented transmission. Before we forced first responders, nurses, teachers, and soldiers out of a job in their understaffed but critical positions, checking to make sure the decision actually served a purpose should have been the first question.

But it was all about politics and profit.