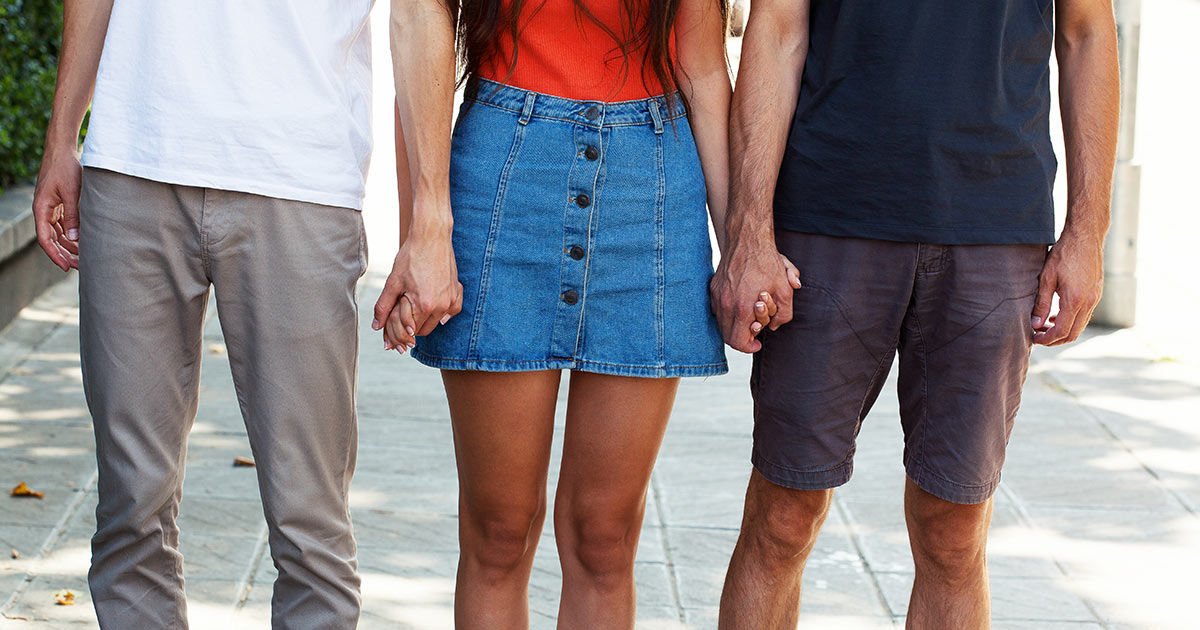 Same-Sex Marriage Advocates: Polygamy Is Next

During this summer’s monkeypox outbreak, one man who caught the virus casually told an interviewer something that would have seemed impossible to most readers: “I have a boyfriend and my boyfriend has a husband and we all live together.” To most Americans, the combination — of words or relationships — would seem shocking. Yet some do not see the lack of monogamy in same-sex marriages as a problem: LGBT activists privately hope to break the “heteronormativity” of having only two partners in a marriage, “to infect the straight world” with polyamory, and to “radically alter” or abolish marriage altogether.

The practice, and advocacy, of non-monogamous “marriage” is one of the secrets buried deeply in the LGBT movement’s closet. Publicly, they insisted that calling same-sex relationships “marriage” would have no impact on society. Merely raising the possibility that tinkering with one facet of marriage might set the entire institution up for reinvention led to huffing exasperation. The Grown-Ups insisted such concerns merely reflected the Slippery Slope Fallacy. Such things would never happen in real life, they assured us.

“[G]ay marriage and polygamy are opposites, not equivalents,” declaimed Jonathan Rausch of the Brookings Institution four days after the Supreme Court’s Obergefell opinion. “Yet this non sequitur just won’t go away: ‘Once we stop limiting marriage to male-plus-female, we’ll have to stop limiting it at all! Why only two? Why not three or four?’”

Seven years later, the returns are in, and the “slippery slope” warning proved prescient. This April, Kimberly Rhoten of the Polyamory Legal Advocacy Coalition announced that non-monogamy is “as large as the LGBTQ population in the United States.” The LGBTQIA2S+ movement has announced the latest addition to its ever-growing acronym: CNM, which stands for Consensual Non-Monogamy, or open relationships of the variety common in the LGBT community.

The contrast between LGBT activists’ rhetoric a mere seven years ago and now reflects their private statements that concealment was the first stage until same-sex marriage became legal. The second was full visibility to transform and abolish marriage. “LGBT demands for access to marriage as a means of protecting and legitimizing their relationships represent … an assimilation politics that emphasizes the similarities of same-sex couples and families to their heterosexual counterparts, rather than a politics that emphasizes and celebrates their differences,” wrote a team of sociologists at University of California at Santa Barbera. Even the suggestion of sexual exclusivity within marriage reflects “heteronormativity,” they frowned. “By heteronormativity, we mean the set of ideas, norms, and practices that sustain heterosexuality and gender differentiation and hierarchy, including romantic love, monogamy, and reproductive sexuality.”

When marriages ceased being exclusively heterosexual, they ceased being monogamous. At least, that’s what these highly credentialed LGBT academics wrote. Nor are they alone; popular same-sex marriage activists admit undermining marital fidelity.

“[I]n some far-off, ideal world, this kind of [LGBTQ sexual] openness may infect the straight world,” Hanna Rosin confessed in Slate in 2013, saying she hoped open relationships would help “heterosexual couples … start to tackle the age-old problem of boring monogamous sex.” New York Times writer Scott James cited anonymous “experts” to advance his advocacy: “[S]ome experts say that boundary-challenging gay relationships represent an evolution in marriage — one that might point the way for the survival of the institution.”

True experts have long known two things: Monogamous couples report higher levels of sexual and relationship satisfaction, and this is due precisely to their exclusivity. “Penn State sociologists, mining a high-quality national data set, found that, on a scale from 1 to 10 rating how crucial fidelity is to a successful marriage, young women’s average score was 9.8 and young men’s average was 9.7,” wrote Alan J. Hawkins of the National Marriage Project. As it turns out, the gratification of animal desires is not the highest human good.

If sexual fidelity represents such a pivotal element for the survival of marriage, why do same-sex marriage advocates seek to undermine it? LGBT extremists view same-sex marriage and polygamy as ways to redefine, and ultimately abolish, marriage. LGBT activist Masha Gessen admitted that “fighting for gay marriage generally involves lying about what we are going to do with marriage when we get there — because we lie that the institution of marriage is not going to change, and that is a lie.” In her view, “It’s a no-brainer that the institution of marriage should not exist.”

Similarly, LGBT activist and journalist Michelangelo Signorile encouraged the LGBT movement “to fight for same-sex marriage and its benefits and then, once granted, redefine the institution of marriage completely,” to undermine “society’s moral codes” and “radically alter an archaic institution.” (Pew found that same-sex couples were twice as likely as the general public to say a “very important reason” they got married was “for legal rights and benefits.” Only 10% of all couples who identify as gay have been through a same-sex nuptial ceremony.)

Christians’ argument that same-sex marriage will degrade the institution in other ways is not a slippery slope; it is a chartered destination.

But any “civil rights” struggle needs a totemic leader. What would the civil rights movement be without Rosa Parks or Mr. and Mrs. Loving? “The problem,” wrote Nico Lang in The Daily Beast, “is that queer monogamish couples lack positive visibility. We don’t have our Will and Jada [Smith], the celebrity couple who models what a successful, healthy open marriage can look like.” (In reality, Will and Jada Smith separated after one of her dalliances, and months before Mr. Smith punched Chris Rock at the Oscars, he concluded, “I don’t suggest our road for anybody. I don’t suggest this road for anybody.”)

LGBT social engineers have run into a problem: America’s near-universal rejection of infidelity. Surveys consistently show that nine out of 10 Americans believe extramarital sexual relations are immoral. How can social engineers break down widespread moral rejection of promiscuity? The same way they broke down public opposition to homosexuality: by declaring it is an inborn trait.

“Sex scholars studying CNM are beginning to explore the possibility that the desire to be non-monogamous is a ‘relationship orientation’ unto itself, or may be part of sexual orientation,” reported Vogue magazine in April. The American Psychological Association convened a task force on the subject in 2019, “in recognition of relationship diversity.”

A stream of propaganda defining sexual preference fetishes as immutable traits has brought about a sea-change in American morality. In 1972, 74% of Americans said “sexual relations between two adults of the same sex” is “always wrong.” In 2018, 58% said such relations were “not wrong at all.” Similarly, the number of Americans who view polygamy as “morally acceptable” has nearly quadrupled since 2006. At the same time, academics have begun extending the “sexual orientation” umbrella to cover pedophilia. Criminal justice professor Allyn Walker has argued that Americans should not see pedophiles (now refashioned as “Minor-Attracted Persons”) as “evil or morally corrupt,” because “there is no morality or immorality attached to attraction to anyone.”

The creation of new sexual “orientations” de novo brings an accompanying cry for legal “rights” — and CNM’s first legal victory came on September 23. In the West 49th St., LLC v. O’Neill case, Judge Karen May Bacdayan declared that “the time has arrived” to legalize polyamory by judicial fiat. The legal status quo holds that “only people who are ‘committed’ in a way defined by certain traditional factors qualify for protection,” she wrote. Current expectations of monogamy prevent society from equating marriage with relationships such as the “polycule” enjoyed by alleged FTX fraudster Sam Bankman-Fried, girlfriend Caroline Ellison, and eight other people.

How long will it be until pandering politicians in Washington introduce a “Respect for Marriage” Act for CNM? (Indeed, the initial draft of the bill did not include a ban on polygamy.)

Even putative conservatives have hailed LGBTQ actions as “the blessings of liberty,” a “conservative cause,” or an expression of freedom. “The concept of sexual freedom is the promotion of the acceptance of deviant sex. Once the concept is admitted, what is to stop society’s march toward embracing throuples, polyamory, and ‘minor-attracted persons?’” Peter LaBarbera, the founder of Americans for Truth, asked The Washington Stand.

“I just think this is the most intellectually dishonest thing I’ve ever seen in the conservative movement, when they’re trying to say gay sexuality, as long as it’s domesticated, is part of freedom,” LaBarbera observed. “… That’s all code words for the proliferation and tolerance of anything goes. How does that flow into the conservation of anything?”

Adopting an anything-goes sexual standard, and equating all relationships by labeling them “marriage,” is the next step toward abolishing the institution altogether — as same-sex marriage and polygamy advocates admit.