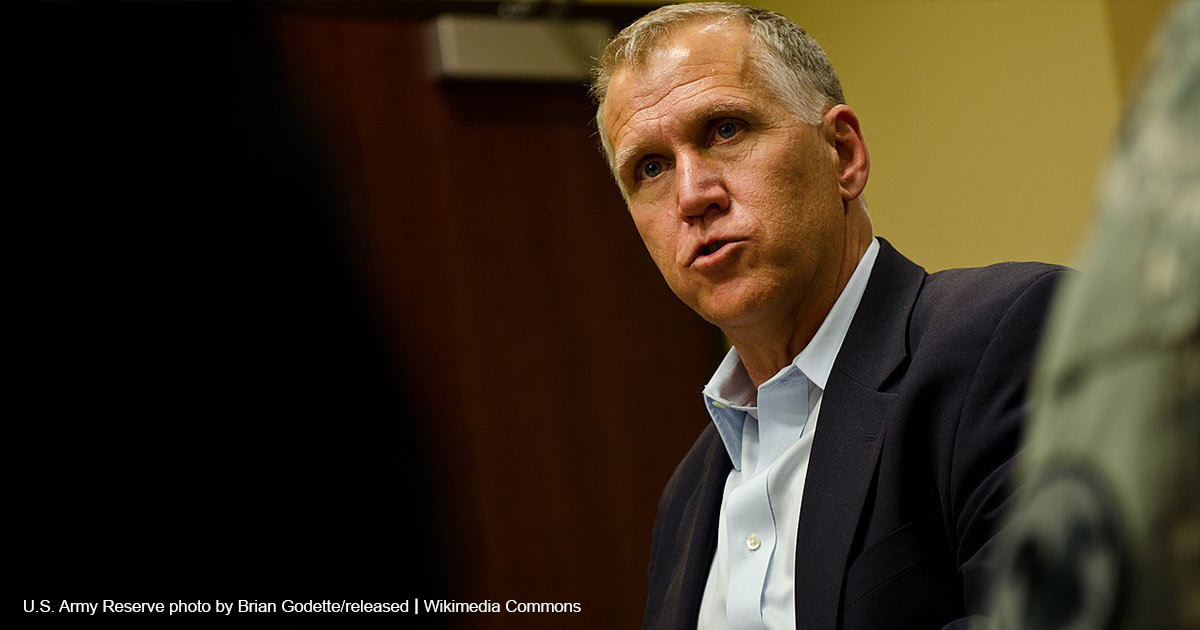 Turns out, time doesn’t heal all wounds — a lesson that Senator Thom Tillis (R-N.C.) is learning from a growing wave of home-state critics. While the two-term Tar Heel probably thought the outrage over his vote for same-sex marriage would evaporate over Christmas and the chaos of the speakership race, local party chairs are making it quite clear that the repercussions are just beginning.

More than a month removed from the betrayal on the so-called Respect for Marriage Act, state party chairs have only ramped up their efforts to hold the nine remaining GOP defectors accountable. Across Iowa, Wyoming, Alaska, Indiana, and North Carolina, the urgency to “do something” about the Republicans’ vote has only intensified, as counties move to censure and publicly excoriate members who set fire to the party’s principles.

Some local leaders, like North Carolina state Rep. Mark Brody (R), are openly calling for more severe consequences for Tillis. “… Having elected legislators flagrantly violating the Party Platform without any consequences undermines any sense of party unity. We need to address this obvious contradiction and settle the matter in the appropriate forum, the NC state Republican Convention. There [have not] been many times in our party’s history that such a ‘foundational’ issue has come before us (maybe only second to the fight against slavery).”

Brody went on, “If we, as Republicans, want to change our Platform to conform to Senator Tillis’ views and beliefs and the new Woke agenda, then we must do it in our open forum Convention. …The Respect for Marriage Act is playing with fire. It and Senator Tillis must be dealt with at the Republican Party Convention. This showdown is long overdue.”

Until then, counties seem laser-focused on passing one resolution after another holding Tillis’s feet to the fire. As recently as last Thursday, a unanimous GOP chapter in Dare County censured the senator, building on the wave of anti-Tillis sentiment from Granville, Duplin, and Lee Counties.

Family Research Council’s Mark Harris, who’s on the ground in North Carolina, said the momentum is only growing to confront the situation. Local grassroots groups are upping the ante on censure resolutions, encouraging members to present them at district conventions in the spring. “Everyone at committee meetings was urged to go back to their county GOP and see if they would approve the resolution to censure Tillis,” Harris said. “At this time, I know of several counties that are working on something.”

Most are pursuing something along the lines of Dare County’s strongly-worded condemnation: “Whereas Thom Tillis, by his vote, deliberately abandoned the national and state party platforms on marriage; and whereas his rejection of such a crucial plank of the GOP platform has damaged the reputation of his party and further marginalized the natural family… Be it further resolved that the Dare County GOP Executive Committee repudiates the actions of Senator Thom Tillis as a betrayal of Republican values.”

Meanwhile, almost 300 miles away, the Senate’s GOP leaders seem eager to provide cover for Tillis, inexplicably elevating him to a leadership role while his support crumbles at home. In news most conservatives couldn’t believe, Minority Leader Mitch McConnell (R-Ky.) decided this week to name Tillis as a “counselor” on his leadership team for the 118th Congress. “North Carolina and the whole country benefit from his service,” McConnell said, raising more than a few eyebrows. “I’m glad he’s taking on this new leadership role.”

Giving Tillis a seat at the table is a slap in the face of movement conservatives, who’ve fought long and hard to protect marriage. For seven years, they’ve watched Obergefell devastate Christians, stripping them of their businesses, livelihoods, jobs, speech, and parental rights. Yet Tillis blew off those concerns, telling The Washington Post that he doesn’t vote for things that have “a serious political consequence.”

As Family Research Council’s senior director of Government Affairs, Quena Gonzalez, told The Washington Stand, Tillis’s vote didn’t just have political consequences — but generational ones. “Senator Tillis and his colleagues showed varying degrees of cowardice and/or willful ignorance, insisting that protecting pastors at the marriage altar and some (but not all) religious nonprofits was enough, even when confronted by constituents and examples of others who have been harmed — and now will be exposed to much more harm. When they had the chance to stand up and be counted they sat out the fight. They were apparently more intent on enshrining same-sex marriage in law than on standing for truth, liberty, and family.”

Although Tillis wants angry voters to believe that he “worked to secure a bipartisan compromise to protect the religious freedoms of churches and religious organizations,” Gonzalez says what he actually did was throw “millions of Americans under the bus.” “He took a lead role in negotiating weak compromise language with the Democrats, which, at best, protected only churches and pastors from performing marriage ceremonies to which they have religious objections.” What about the 60% of North Carolinians who rejected same-sex marriage in 2012, he asked? “Thanks to Senator Tillis, they must now decide whether to hold their tongues or risk the wrath of the mob.”

For now, at least, that wrath is directed toward the senator, who has an uphill climb convincing constituents that he has their best interests at heart. “The days of Senate Republicans being able to vote against the pro-family planks in the Republican Party platform are over,” Gonzalez warned. “Local parties are waking up and censoring their senators for catching Potomac fever, for going to Washington and forgetting who sent them there, and why. Senator Tillis is just the latest to experience a growing backlash from local parties holding senators accountable to the state and national party platforms,” he said. “Local parties understand retail politics, and they know that base voters are not going to turn out to vote, much less donate time and money, if the party strays from its principles.”

“We would encourage others to stand with them,” Gonzalez urged. “As Edmund Burke wrote, ‘When bad men combine, the good must associate; else they will fall, one by one, an unpitied sacrifice in a contemptible struggle.’ Now is the time to stand.”