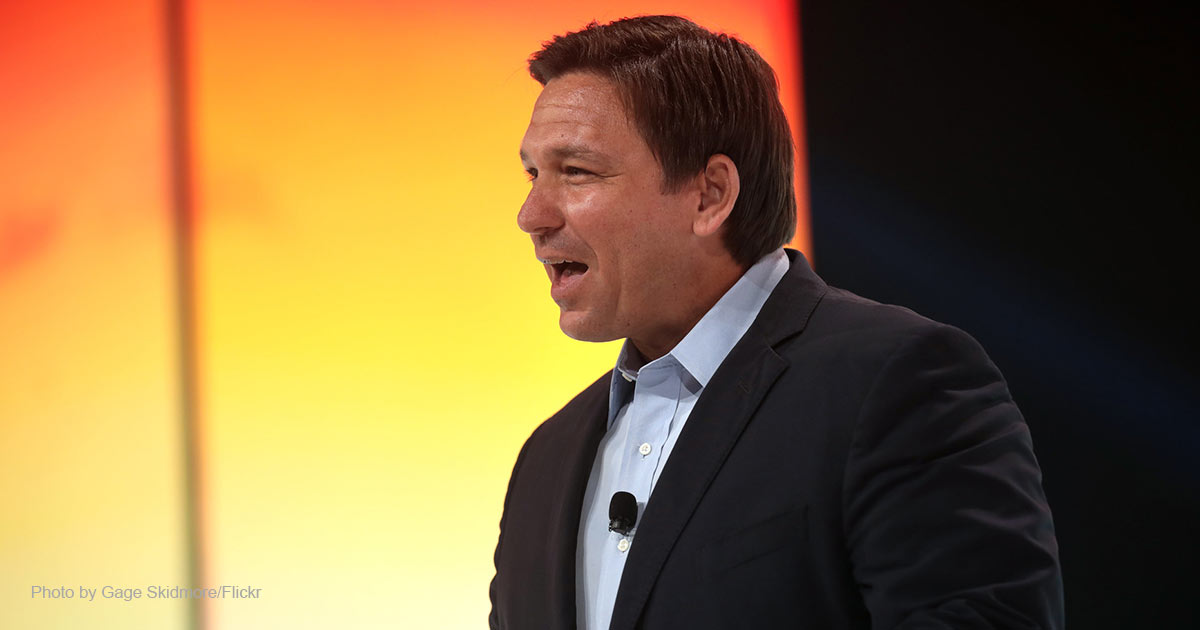 The state of Florida has instructed public schools to ignore a Biden administration executive action that would force schools to open girls’ showers, locker rooms, restrooms, and dormitories to members of the opposite sex, and to let males compete in women’s sports.

The Biden administration announced in June it would interpret Title IX, a federal law banning sexual discrimination against women, as though lawmakers intended “to include discrimination based on sexual orientation and gender identity.” Biden officials said schools must let transgender individuals use the intimate facilities of the opposite sex, and participate in sports based on their gender identity, or Biden would withhold federal funding for their school lunch plan, which feeds low-income children.

Florida officials announced Thursday that the Sunshine State will not be held hostage.

Florida Education Commissioner Manny Diaz Jr. noted in a memo to all public, private, and charter schools in the state that, since the document is a “sub-regulatory” guidance, it merely states the federal government’s understanding of law. Since the federal government admits guidances do not — and cannot — carry legal weight, the latest transgender document “should not be treated as governing law.”

Florida state law prohibits the Biden administration’s agenda. “To the extent that you do any of these things, you jeopardize the safety and wellbeing of Florida students and risk violating Florida law,” Diaz wrote. Last June, Governor Ron DeSantis (R) signed The Fairness in Women’s Sports Act requiring students to compete against members of their own sex.

His stance is shared by governors across the nation, 15 of whom protested Biden’s transgender policies in a letter sent to the president on Wednesday. “By expanding Title IX to include gender identity and sexual orientation, your [a]dministration puts girls and women of all ages at risk,” wrote the governors, all Republicans. “The rule ensures that a far-left ideology on gender will be taught in schools nationwide.”

Their persuasion will meet court litigation, as state attorneys general go to court to bar Biden from making unilateral changes without following the legislative process.

Biden threatens to “withhold valid and appropriate nutrition from the children of hard-working, low-income families … to enforce this radical agenda. And we’re going to push back and make sure that doesn’t happen,” Alabama Attorney General Steve Marshall (R) told “Washington Watch with Tony Perkins” on Friday. “We continue to see multiple efforts at the federal level to impose … this radical gender ideology that clearly is not embraced by a majority of Americans.”

A new poll found 62% of Americans believe the Biden administration has “gone too far” with its transgender policies, specifically including Title IX.

The Biden administration is “using federal dollars as the mechanism to try to enforce their beliefs and their policies on states that otherwise would reject it,” Marshall stated. Biden’s policies constitute nothing more than “a continuation of what we saw occur during the Obama administration,” which issued a May 2016 federal guidance requiring schools to let men use the restrooms, lockers, showers — and live in the college dorm rooms — of the opposite sex.

To achieve this policy change, critics say, Biden twists Supreme Court precedent. Biden cites the court’s 2020 Bostock opinion, written by Justice Neil Gorsuch, that Title VII of the 1964 Civil Rights Act applies to people who identify as LGBT. The governors highlighted the fact that the ruling “specifically pertained only to enforcement of Title VII, which covers employment discrimination. The Court’s decision in that case explicitly did not apply to ‘other federal or state laws that prohibit sex discrimination,’ such as Title IX. As such, these changes should be rejected based on this unwarranted interpretation.”

Biden’s Title IX changes are currently blocked in 20 states, which sued the administration with the help of the Alliance Defending Freedom. U.S. District Judge Charles Atchle, a Trump appointee, granted the preliminary injunction on July 15.

The governors also criticized the anti-democratic methods Biden used to foist radical, ideology-based guidelines on public schools. “The USDA’s policy update was also announced in a manner that ignores the Administrative Procedures Act,” which allows the public time to comment on substantive rules changes. Instead, they wrote, Biden officials hid the transgender guidance “in an old proposed regulation recycled to avoid the APA.”

“They’re circumventing the process,” which requires officials “to publish those rules for public consideration, as well as comment, before anything is officially adopted,” Marshall told Perkins on Friday. “It is absolutely lawlessness and a failure to abide by the structure that we’ve established, both through our laws as well as through our Constitution.”