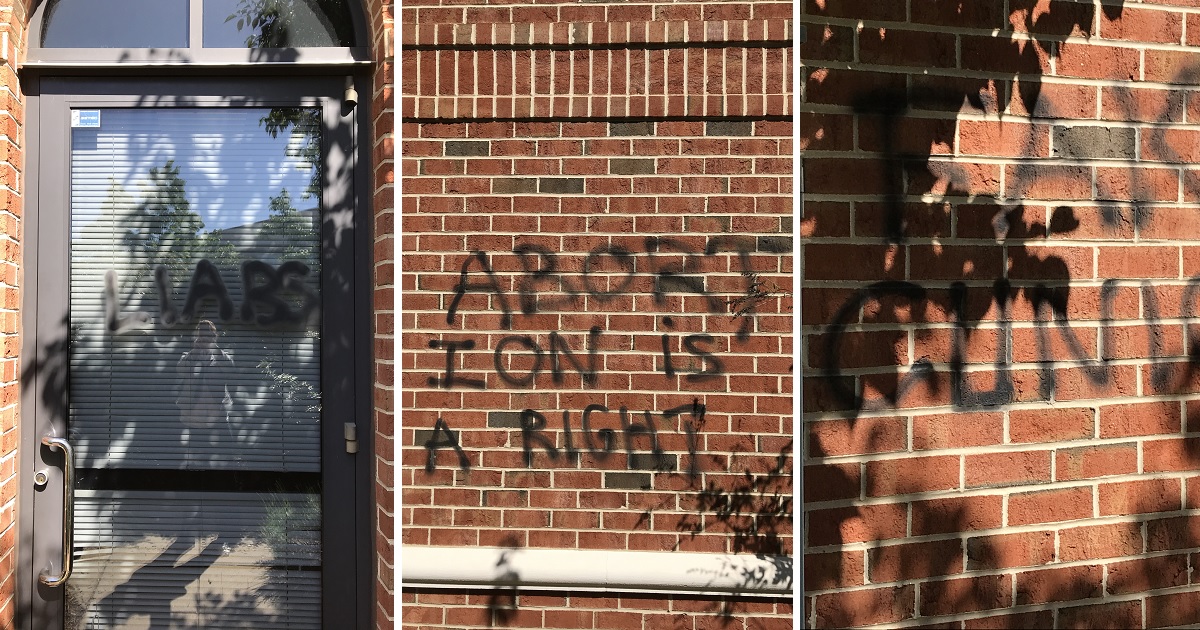 Attacks against pro-life churches and pregnancy resource centers bear the eerie “echo of the KKK’s burning cross on the lawn” of churches that supported civil rights, a Republican congressman said as the House of Representatives passed a resolution condemning 100 such attacks nationwide on Wednesday.

“The Biden administration has failed to take action to respond to the radical attacks on pro-life facilities, groups, and churches, or to protect the rights of these organizations,” the resolution notes.

Family Research Council has documented 101 such attacks since the still-unsolved leak of the Supreme Court ruling overturning Roe v. Wade last May.

“Pregnancy care centers, as we all know, are made up of the most loving, selfless, compassionate people, mostly women on the planet,” Rep. Chris Smith (R-N.J.) told “Washington Watch with Tony Perkins” on Wednesday afternoon. Yet “volunteers at pregnancy centers … understand that they have a target on their backs,” said Rep. Tim Walberg (R-Mich.) on the House floor. Vandals smashed the windows out of Walberg’s congressional office in Jackson, Michigan, along with the headquarters of the Jackson Right to Life, headquartered in the same building.

Attacks of this nature are “more typical of an atheistic totalitarian regime than our wonderful constitutional republic,” said Rep. Glenn Grothman (R-Wisc.). “This effort to muzzle those who express a wide variety people of conservative Christian viewpoints has become more and more common, and should scare anyone who does not want to live in a religiously hostile, large government state.”

Such attacks represent “the death cult’s echo of the KKK’s burning cross on the lawn — brazen, violent intimidation,” said Rep. Dan Bishop (R-N.C.). “But the federal government responded to the KKK. Where is the Biden Justice Department amid this violent campaign of national scope? Mr. President, it’s time for action. Do your duty.”

Despite the cascade of violence, including at least one act directed toward a sitting member of Congress, “President Biden’s Justice Department has stayed silent on these acts of domestic terrorism,” noted Walberg. “Is this the progressive America my colleagues talk about? … Does their idea of progress consist of political violence targeting those who provide services to women and families? Are intimidation and violence acceptable to the Biden administration and my colleagues on the other side of the aisle?” he asked. “Today, Congressional Democrat[s] have [the] opportunity to right the wrongs of this administration.”

Yet 209 Democratic members of Congress opposed the measure, which Rep. Jerrold Nadler (D-N.Y.) derided as “a transparent political exercise intended to lay the groundwork for MAGA Republicans’ plans for a total, nationwide ban on abortion.” He attempted to add a poison pill amendment that condemns violence against abortion facilities and “affirms that all people have the [right] to access reproductive health care,” including abortion. Many members opposed the bill on the grounds that it did not condemn violence against abortion facilities. Rep. Diana DeGette (D-Col.) said, by excluding the amendment, “Republicans are sending a very dangerous message.”

Pro-life pregnancy resource centers are 22 times more likely to be attacked than abortion facilities, according to a study from the Crime Prevention Research Center.

The assault on Christians who affirm traditional, biblical teachings about abortion compound the problem of attacks against churches generally. An 84-page report by FRC analyst Arielle Del Turco “found over 400 attacks on churches within almost the past five years,” Travis Weber, vice president for Policy and Government Affairs at Family Research Council, told Perkins on Wednesday. “This is an astounding number for any country like ours that thinks of itself as a democracy, a free country in Western civilization. We don’t think of institutions, places of worship, being randomly targeted, attacked and vandalized. That’s the reality. And it’s only increasing.”

“Christians need to be vigilant when they’re going to worship these days,” said Weber. “This should clue us all into the spiritual reality and the spiritual opposition that our country is facing.”