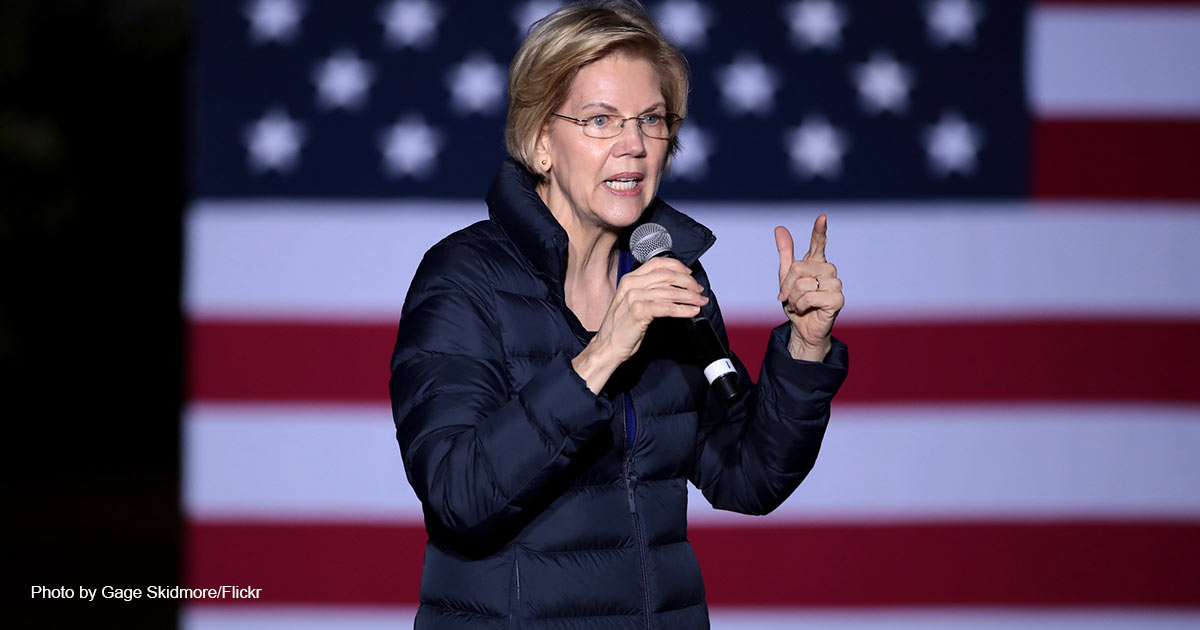 Senator Elizabeth Warren (D-Mass.) has renewed her heated campaign against pregnancy resource centers by implying that the crisis pregnancy center “industry” lures “pregnant people” into its offices — not to help expectant mothers — but to conduct “surveillance” that could help politicians prosecute women who obtain illegal abortions. Pro-life health care providers call the allegations ludicrous, and a former human trafficking victim replied to Warren’s incendiary rhetoric by saying, “I wish she’d be quiet.”

The charges came in a letter Warren and seven of her Senate colleagues sent to the leadership of Heartbeat International, a worldwide coalition of pregnancy resource centers, on Monday. “The CPC industry is now functioning as surveillance infrastructure for the anti-abortion movement, amassing data that could be used in pregnancy- and abortion-related prosecutions post-Roe,” they claimed without providing proof. Pro-life advocates are “luring pregnant people” to their facilities via “false and misleading tactics” in order to collect health care information which “in many cases does not appear” to be subject to federal privacy laws. “We fear” that this information “may be used” to put post-abortive mothers “and their health care providers [abortionists] at risk of criminal penalties,” the senators wrote.

The letter did not cite a single example of any pregnancy resource center using such data to target a specific individual.

Pro-life advocates believe the senators merely aimed to discourage pregnant women from accessing medical services, and other compassionate care and support, at pro-life care centers. “This is naked politics intended not to help women but to influence elections. It is clearly a stunt designed to appease Big Abortion power brokers,” said Jor-El Godsey, president of Heartbeat International.

A former human trafficking victim who has been helped by the pro-life movement says the senators’ accusations could not be more erroneous. Pregnancy resource centers “pour out love for the people who are coming into these places. And they are so generous with resources, with caring, with education,” said Darlene Pawlik, who was sold into sexual slavery in her early teens before “kind pro-lifers helped me escape.”

She agreed women — and girls — being trafficked “are vulnerable, and it’s the abortion vendors that are really the ones preying on them. It’s the resource centers that are enabling them to be courageous,” Pawlik told the Family Research Council’s 2022 Pray Vote Stand Summit last Wednesday.

Warren’s latest denunciations extend her months-long effort to close the nation’s roughly 3,000 pro-life women’s centers. “We need to shut them down all around the country,” she said over the summer, asserting that pro-life counselors “torture” expectant mothers. She claimed PRC staff and volunteers — including more than 10,000 licensed medical professionals — “wish them harm.” Warren introduced the “Stop Anti-Abortion Disinformation” (SAD) act in August, which would effectively let hostile federal regulators fine pro-life centers out of existence.

The latest insinuation that pro-life ministries could reverse-engineer private data to track down post-abortive women does not come from technological experts. Instead, Warren and her colleagues recycled the “surveillance” claim from a far-Left group called The Alliance: State Advocates for Women’s Rights and Gender Equality, which describes its mission as “progressive advocacy at the intersection of reproductive rights, LGBTQ equality, freedom from gender-based discrimination and violence, and economic justice.”

A Heartbeat International spokesperson specifically refuted the allegations, saying it keeps all its affiliates’ data “secure” and that it has access only to “numbers, so we’re not looking at any of that [personal] information.”

The left-wing website Vice News also claimed in May that digital data about visiting abortion facilities could fall into the hands of “anti-abortion vigilantes.” Yet industry leaders have suggested the scenario being forecast is impossible. SafeGraph, a company that has purchased private data related to abortion facilities, responded in May that it only lists the general Census track where groups of people travel from; there is no personalized data to exploit. “We only sell data about physical places (not individuals),” it said.

“It is important to note that not one of the senators listed in the letter condemned actual violence and vandalism against pregnancy help centers this summer,” said Godsey. “Instead, they've spent their time fabricating a narrative on unfounded speculation.”

Indeed, the Left’s “refusal to denounce the violence while joining the chorus of propaganda attacks against pro-life pregnancy centers — that’s only going to embolden and foment violence,” Rev. Jim Harden, the CEO of CompassCare, another pregnancy resource coalition, told The Washington Stand.

There have been 57 attacks on pro-life pregnancy resource centers, as well as dozens of acts of vandalism against pro-life churches, since the May 2 leak of the Dobbs decision, according to a list maintained by Family Research Council.

“Rather than finding ways to help women be able to choose something besides abortion,” the letter’s signatories “have used their political powers to bully those who are helping women make life-affirming choices,” Godsey concluded.