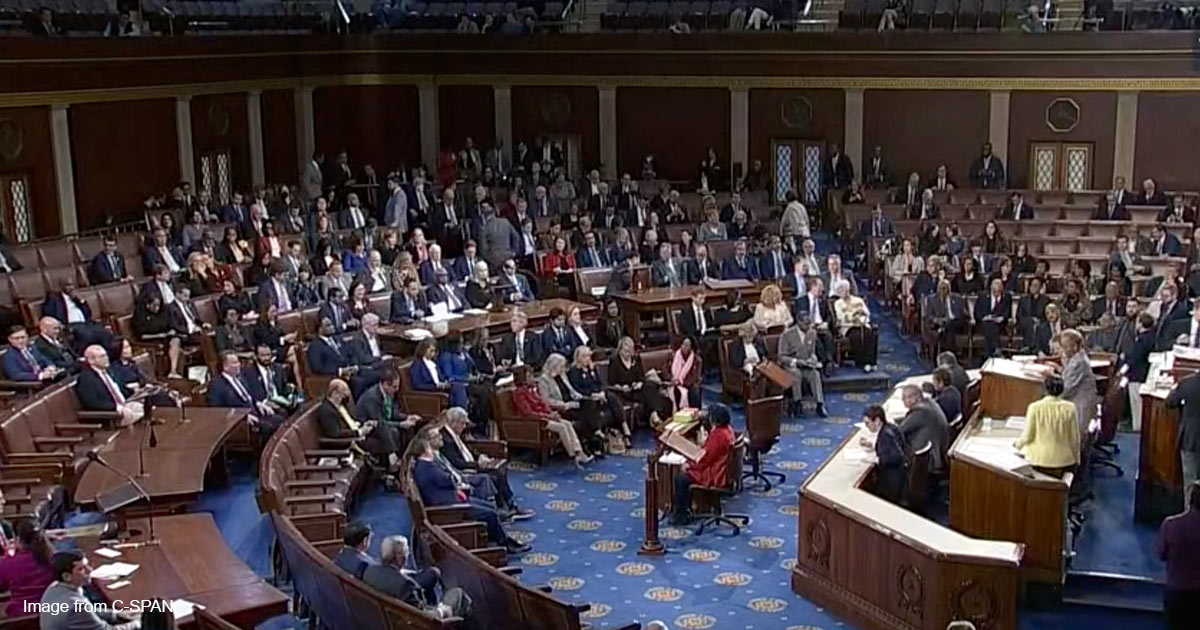 The Republican-controlled House of Representatives followed through with its pro-life campaign promises on Wednesday by passing two life-affirming bills, including legislation to protect babies born alive during botched abortions that Nancy Pelosi had prevented members from voting on more than 80 times. House Republicans also advanced a congressional resolution condemning the nationwide epidemic of assaults, arsons, and fire-bombings against pro-life churches and pregnancy resource centers, likening the attacks to “the KKK’s burning cross on the lawn.”

The Born Alive Abortion Survivors Protection Act (H.R. 26) passed 220-210, with bipartisan support: One Democrat, Henry Cuellar of Texas, voted in favor, and Rep. Vincente Gonzalez (D-Texas) voted “present.” The bill requires that if a baby is born alive during a botched abortion, the abortionist must provide the same level of lifesaving care a doctor would provide to any child of comparable age, or face up to five years in prison for letting the baby die. The surviving child must immediately be transported to a hospital, and abortion facility employees must report any violation of these medical standards. The bill also empowers grieving mothers to sue abortionists for their inaction.

“Nancy Pelosi and the Democrats blocked this simple vote on the Born Alive Abortion Survivors Protection Act. And here in less than eight days, the Republicans have actually passed that out of the House,” said Family Research Council President Tony Perkins on “Washington Watch” minutes after the vote. “We celebrate today’s long-overdue House passage of the Born-Alive Abortion Survivors Protection Act to protect babies who survive attempted abortions,” said Dr. Christina Francis, CEO-elect of the American Association of Pro-Life Obstetricians and Gynecologists (AAPLOG) in a statement.

A 2002 law makes it illegal to kill a newborn child in an abortion facility, but federal law does not specify what abortionists must do to save the baby’s life. “Infants born alive following an abortion are kids. They’re children,” said Rep. Jim Jordan (R-Ohio). “All newborns deserve the same level of care.”

Although Democrats said the new bill is unnecessary due to the 2002 law, abortionists and their political allies have repeatedly affirmed they would let newborn infants die of neglect. A Planned Parenthood abortionist in St. Paul, Minnesota, told a woman, in the event of a botched abortion, “most likely, we would break the baby’s neck.” Then-Virginia Governor Ralph Northam (D) exhibited a more passive stance, saying in 2019 that, in the event a child was born alive in an abortion facility, “a discussion would ensue” about whether the child would receive lifesaving care. Similarly, in 2011, a Planned Parenthood lobbyist testified before the Florida House of Representatives that, if a child is born alive, the decision of life or death “should be left up to the woman.”

Democratic opponents of the bill also stated the bill deals with a non-existent problem. Rep. Rosa DeLauro (D-Conn.) said live birth during abortion is “something that does not happen” in the United States. “It really does happen,” said Gianna Jessen in an interview about her experience, noting she had “the gift of Cerebral Palsy” after being born alive during a botched saline abortion in the 1970s. Members of the Abortion Survivors Network, some of whom were present on the Hill for the vote, have hoped for years their stories would change law. “My birth mother went in to have an abortion procedure, and I was born alive,” said Amy Miles in a short ad telling her story. “I’m so thankful to be here.” Her story echoes that of Melissa Oden and others.

Sadly, most babies born alive during abortion do not survive. The CDC recorded the deaths of 143 babies after being born alive during a botched abortion between 2003 and 2014. But abortionists have no incentive to report such events. Applying scholarly estimates from U.K. physicians would yield more than an estimated 900 live births during botched abortions in the United States annually.

Rep. Mary Gay Scanlon (D-Penn.) took the criticism one step further, denouncing the “grotesque,” “misleading,” and “harmful” bill. “If passed, it would cause more maternal deaths in this country,” she asserted without proof or explanation.

Their reaction “is simply over the top,” said Perkins. “Listening to the opponents of this bill, it just makes zero sense and is indicative of the level of willful or negligent deception that many are proceeding on in their opposition to this bill,” agreed Travis Weber, FRC’s vice president for Policy and Government Affairs at Family Research Council.

Both measures now go to the Democrat-controlled Senate.